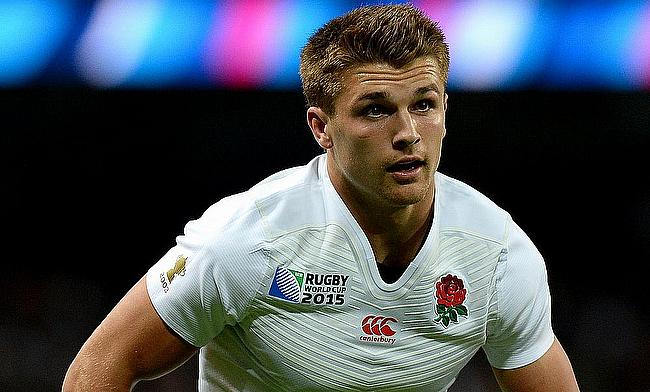 TRU Podcast - The Six Nations Finale ft. Charlie Beckett
Getting selected in England's forward pack- Is it the hardest job in the world?
Exclusive: Katy Daley-McLean - “We now have the opportunity to go to Italy and finish with a Grand Slam
Jones excited to be working with new England starlet Jacob Umaga

Henry Slade could have been forgiven for putting his feet up.

After scoring a try in the Gallagher Premiership final and playing his part in Exeter Chiefs’ European success, no-one could have begrudged England’s double-winning centre of a rest this weekend.

But with the chance to become Six Nations champions on Saturday, the 27-year-old is now gunning for a third piece of silverware in as many weeks.

England travel to Italy knowing a bonus-point victory in Rome could see Eddie Jones’ side claim their first Six Nations title for three years if the result of France v Ireland goes their way.

It could be all smiles for England at the Stadio Olimpico and despite Slade featuring in a string of high intensity matches for Exeter prior to this weekend, the Chiefs man is fuelled by that winning feeling and Jones believes his side can use it to their advantage.

“I think confidence plays a big part in it,” said Slade, who will start for England at inside centre on Saturday.

“We have had a good couple of weeks with the club and a good season with the Chiefs and hopefully we can bring that form up here. We [Slade and Exeter team-mate Jonny Hill] had to get in England mode pretty quick and we got up here Monday morning and we were straight into it.

“I have never really won a Six Nations before where I have played a decent part in it so it is something I am really excited for and hopefully we can win a third title in three weeks.”

“My experience of coaching players who have played in big finals such as the Premiership final and the European Cup final is that they come in [to camp] full of beans,” Jones added.

“All they want to do is come in and keep on playing. It is like a batsman. He will score 100 in one game, he will score 100 in the next and the coach says ‘we are going to sit you out of the next game.’ He looks at you as if you have got two heads! Why would you want to be left out when you are on good form?

“They want to keep playing when they are in good form and he is in good form. He wants to play and he loves playing for England so it wasn’t really something we had to think about too greatly.”

With Manu Tuilagi out for six months with a torn Achilles injury, Jones has opted for Bath’s Jonathan Joseph to partner Slade in the centres which means captain Owen Farrell will start his first game for England at fly-half since last year’s World Cup quarter-final against Australia in Oita.

Eyebrows were raised on Thursday when Farrell was the only recognisable number 10 named in Jones’ starting XV - with Wasps starlet Jacob Umaga not included in the matchday 23 - but the England boss has stressed both Slade and Northampton Saints’ George Furbank can fill the fly-half position if needed this weekend.

“I have got two good options there, Henry or George Furbank, and we are extremely comfortable with either of those guys stepping into the breach,” said Jones. “George has been in training with us for two mini camps and every time he has stepped into the team, he looks an absolute natural there so we don’t have any worries about him and we know Sladey is that type of player who can play, 12 or 13, 15, left-wing, right-wing or 10.”

Furbank, in particular, will be under the spotlight on Saturday afternoon, with Jones reinstating the 24-year-old in the full-back position after the Northampton man had earnt his first caps at the beginning of this elongated Six Nations campaign.

What does an intense England session look like? This ??

Back in February, Furbank struggled in the Test arena against France and Scotland whilst his club form after rugby’s restart didn’t set the world alight. The England head coach could have given the nod to current Bristol Bears full-back Max Malins following a sequence of eye-catching performances but Jones believes Furbank can prove the doubters wrong.

“Common consent has its own opinion and I am not going to debate common consent,” Jones added.  “Selection is always about judgement. I think he is a very good player.

“We were really happy with what he did in the Six Nations. He had a difficult game against France, which the whole team did, but he responded very well in the Scotland game and I think like a lot of young players, the second season in a club season is always more difficult.

“Everyone knows about the players. Teams will try to take away your strengths and attack your weaknesses and it is up to the adaptability of the player to then find a new way of deploying his strengths and overcoming his weaknesses. What we are seeing from George is that application and desire to keep wanting to get better and he’s been a standout in our preparations so far.”

And whilst there is talk of who may step into Farrell’s shoes should the Saracens man need to be replaced, the England captain, himself, is itching to take to the field on Saturday having not played a competitive fixture since the beginning of September.

Farrell was sent off for a high tackle on Wasps’ Charlie Atkinson and received a five-game ban for his actions which saw the 29-year-old miss Saracens’ push for the Heineken Champions Cup.

Having had time to reflect on how his domestic season ended, the England skipper is looking forward to returning to action: “No-one wants to be involved in an incident like that,” Farrell said. “Not for it to end up the way it did - a player getting injured and myself getting sent off. You do take a good look at yourself when things like that happen.

"You want to improve. In terms of technique, I want to get better. More than anything I am excited to play. I have been working on everything, not just tackling technique, which I would work on anyway. The main thing is I can't wait to get out on the field and get playing.”

Farrell’s half-back partner on Saturday will be Ben Youngs, who will become the second men's player to reach the landmark alongside Jason Leonard.

The Leicester Tigers man has been a mainstay in the side since his debut against Scotland in 2010 and his international captain was full of praise for ‘Lenny’.

“It speaks for itself in terms of being the second ever English player to reach 100 caps,” Farrell added. “He is still young too!

“I remember when we were coming through as youngsters, him getting a call-up for the England team at an early age and making an impact straight away. His infectious drive and energy for the team to drive the team forward, his love of playing for England and playing in them big games too, it is infectious and he is everyone someone wants to play with.”

Youngs’ century of caps has been delayed due to the coronavirus pandemic, but he will now play his part in a dramatic Six Nations finale with three teams still in the hunt for the title.

Along with England, both France and Ireland have a chance of winning the championship and whilst Jones is purely focused on his side’s performance in Italy, he hopes Saturday’s feast of rugby can be the main talking point following a challenging period for the sport, including the recent developments surrounding 13 Barbarians players.

“It has been a difficult time for society. People have lost their jobs and people have lost family members so we feel absolutely privileged to be able to have the opportunity to play top level rugby and our responsibility is to put a smile on people’s faces.

“Our players have approached this camp with a zest for the game that I have probably never seen before. We all understand at the moment rugby is a bit of a laughing stock and we all love the game. “We are lucky enough to play the game at the highest level and we want to make sure we put the game back where it needs to be.”