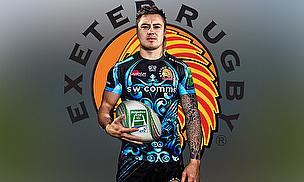 Stuart Lancaster’s side, still with a few months to go before the start of the competition, is already filled with injuries. Immediate wing options: Marland Yarde, Christian Wade and Ben Foden are all injured and set to miss the start of the tournament.

The talented Exeter flyer has been on the radar for a while, as U20 Junior World Cup winner and England Saxons squad member all combined with an ever-growing number of impressive Premiership displays.

We at Talking Rugby Union highlighted Jack as ‘one to watch’ this season when we caught up with him earlier in the year. Read our featured article on Jack Nowell here…

"There are some interesting selections that are going to have to be made very shortly for the Six Nations squad and Jack is right on form.

"He'll be at a good age when the World Cup comes about (in England in 2015). So long as he plays well, I think everything's in his favour.

"He has to do it when it's tough, it's been tough the last few weeks and he's been making some good line breaks for us.

"I think he's got every chance, if he carries on the form he's in at the minute, of pushing himself forward into real contention."

Baxter and his side travel to France this Saturday to face Heineken Cup holders Toulon at the Stade Felix Mayol.

The fixture is an exact return match of last week’s game where the French side emerged narrow 14-9 victors at Sandy Park.

This week, Toulon Captain and English rugby legend Jonny Wilkinson paid a glowing tribute to Exeter after they pushed them all the way at Sandy Park.

Wilkinson told the Telegraph that he thought his side had been somewhat fortunate to win:

“It was a very tough game, but it was what we were expecting, having watched Exeter and the way they have been getting on,” Wilkinson said.

“It is fabulous to see the way they are playing the game, but also the strength with which they are able to compete with, and beat, so many teams. A lot of people praised the battle they put up against Clermont last season, but it is no longer about that. These guys are beating teams day in and day out and they are playing great rugby in doing it.

“It is magic for English rugby that there is an example like Exeter, with guys from one to 15 showing skills and playing in that manner, and it is something to learn from, and certainly as a team we will be learning from what they are doing, and growing from how hard it is to play against them. It is great for us, for European rugby, and it is great they are doing that down in Devon. It is a fabulous place, with fabulous support, and long may that continue.”

Exeter need a tough away victory on Saturday to keep their hopes of topping Pool two alive, and Wilkinson is under no illusion that the game will be easy:

“We know we have got to prepare very well to play Exeter next week because we have seen what they are capable of and they will be incredibly tough again,” he said. “If a few balls hadn’t gone down for them, and if the rub of the green had gone slightly differently, we know we would have been in a very different situation right now, and I wouldn’t like to be doing this again.”