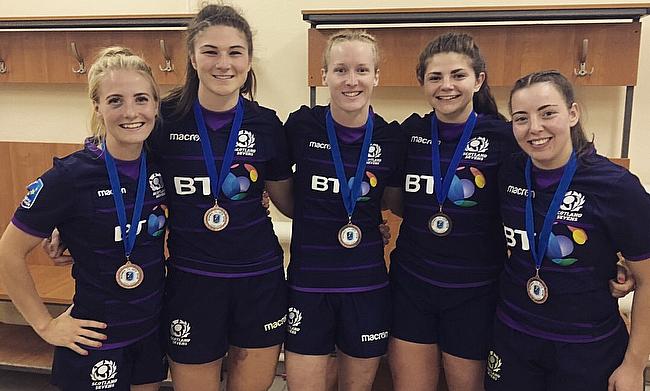 On the rugby pitch, Lauren Harris has had to tackle a lot of tough opponents over the years - and now she is looking to tackle another tough subject and break down some barriers as she launches her own clothing brand.

The Badge of Shame Company has been set-up via crowdfunding and Harris is “advocating for a future with less judgement, less prejudice and more good humans” through her garments which have earned nothing but positive reviews so far.

There will also be many people in rugby who will also have praised Harris for her talent on the pitch during a very successful career as a player.

A former pupil of Denholm Primary School and Jedburgh Grammar School in the Scottish Borders, Banff-born Harris went on to attend Robert Gordon University in Aberdeen where she studied physiotherapy.

Whilst up north, she played for Aberdeenshire and began to get more widely recognised in rugby circles as a winger with a good turn of pace when she represented Scotland in the Home Nations University Sevens and she was also in the GB University Sevens team for the World University Championships in Portugal in the summer 2009.

She earned her first Scotland XVs cap in 2011 against Spain and played quite regularly until 2013 when she headed off for a spell of travelling.

By then she had already picked up some Scotland Sevens caps too and, on her return in 2016, she made it back into the national fold and went on to earn 13 full caps and help the abbreviated game squad to promotion to the Rugby Europe Grand Prix events.

Inspired to be the change? I'm starting a new gender neutral ethical clothing company and need your help.
Please take a look at our crowdfunding page, re-tweet and pledge if you can. Any and all support is greatly appreciated! Thank you good humans!https://t.co/m0ZX0uqDC6

Domestically Harris played for Melrose, had a spell in Manchester and played for Edinburgh University when she was studying for an MSc in Strength and Conditioning.

She then began playing for Exeter University and Bristol Bears and after achieving a lot in her career, she has no regrets.

“Being at Edinburgh University helped me a lot because I was able to give more time to my rugby than I had been able to when I was in Manchester,” Harris told TRU.

“The standard at Edinburgh was also really good and the players all pushed each other on, so when I moved down to Exeter, I was keen to kick on with my rugby; playing at the University and with Bristol Bears.

“I started making moves to begin working as a physio full-time and to finish the 2018/19 season with Bristol Bears in the Tyrrells Premier 15s.

“It was a brilliant experience, playing with and against internationalists week in and week out was great for me. Bristol is a great club and I was surrounded by good people and every game was a test.

“It was a nice way to bow out and I hope they do well in the future.”

Harris got to the stage in recent months where it was taking her longer to recover from knocks and she had a bad back. As a result, she felt the time was right to call it a day at the end of the last campaign and she looks back on 29 Scotland XVs caps and numerous Scotland Sevens appearance with pride.

“I always intended to retire at the end of the Six Nations earlier this year,” she explained. I played during the Autumn and then in our game in Spain in January and it is a bit of a shame because that loss ended up being my final appearance.

“I kind of fell out of the picture during the Six Nations and these things happen. I am not finishing on a sour note at all, I feel privileged to have played for Scotland XVs and sevens over the years and I am delighted to have been involved during Shade Munro’s tenure as head coach.

“Since first playing in 2011 there has been a noticeable shift in the mindset of the squad - under Shade there was much more resolve and expectation levels rose as a result.

“He has obviously moved on now too, but I am excited to watch from the sidelines and see how the young, up-and-coming players do for Scotland. They have new head coach now [Phillip Doyle] and I wish them all the best.”

Now working as a physio in Surrey, Harris has been devoting all of her spare time to building up her new clothing range.

“I was doing some reading and throughout history, people have been forced to wear Badges of Shame for the purpose of public humiliation and persecution,” she explained.

“I have always been creative and have a small greeting cards company so I thought about producing t-shirts and just gave it a go.

“Some team mates and relatives have tried out prototypes and thanks to the Natwest/Royal Bank of Scotland crowdfunding, I have now reached my target and I will now have access to mentors and can start producing the garments in bigger numbers.

“The Badges of Shame had specific meanings, indicated by their shape and colour, to characterise something considered shameful.

“At The Badge of Shame Company, we intend to flip that on its head and celebrate kindness, inclusion and equality by projecting positive messages on our gender neutral clothing range.

“We are advocating for a future with less judgement, less prejudice and more good humans - we are inspired to be the change and our clothing is made to make the difference.”

Exciting times for Harris then and it should be noted that 10% of all profits from the new venture will go to charities that work to support humans in need.