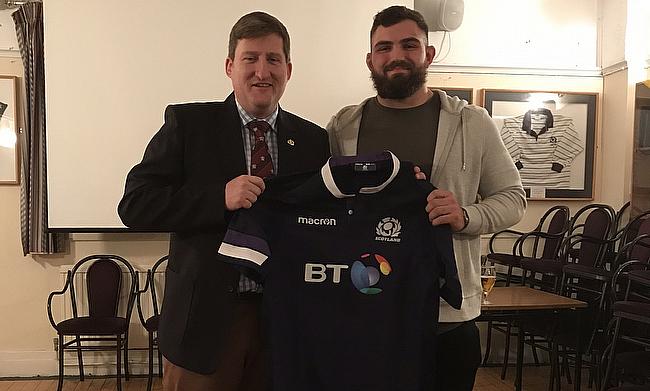 Scotland international Ross Ford announces retirement
David Denton: Playing rugby doesn’t automatically mean you will be successful in life
Brown: Not many people focus on ‘the other side’ of rugby
Oz-some experience Down Under sets Scot Eilidh up nicely for Biarritz

As he continues the summer training sessions in Portugal’s Algarve region this week with the 43 other members of Scotland’s extended World Cup training squad, you could forgive Jamie Bhatti for feeling like he has ‘made it’.

After all, the 25-year-old loosehead prop has had a meteoric rise from the amateur game to where he is now - 13 international caps under his belt and currently getting ready for a new chapter at Edinburgh Rugby after a solid spell with Glasgow Warriors.

However, Bhatti has had to work for everything in his life - he remembers vividly the early mornings getting up to work as a slaughterman as little as four years ago - and that hard work will certainly not be stopping now for his humble character.

A product of his local club Hillfoots and then part of the famous Stirling County youth set-up, Bhatti won 17 caps for Scotland under-20 in 2012 and 2013.

He was a key member of the County first XV pack for a number of years before moving on to Melrose in the summer of 2015.

Great that @HillfootsRFC even made it into the Ireland v Scotland programme! Hard luck to @jamiebhatti and the rest of the squad, here’s hoping that two wins next week might further bump us up the world rankings!???????????????? pic.twitter.com/PTetDp2fU9

Things then gathered pace and he soon found himself playing for the Warriors and making his Scotland debut off the bench against Samoa in November 2017.

And as soon as that block of Autumn Tests were over – where he earned further caps against Australia and New Zealand that month - he was straight back to his first club to present them with an international jersey.

“We were delighted that Jamie wanted to present his international shirt from the Australia match to his old club,” Hillfoots former president Paddy Sherrard told TRU.

“When he came down, the clubhouse was packed with our senior players, many of whom are old school friends of Jamie, as well as a number of our junior players.

“Jamie was truly inspirational for the kids talking of his meteoric rise and encouraging them to make their dreams reality.

“The club is at the heart of the community of the Hillfoots villages from Muckhart all the way through to Menstrie and the club is one where rugby can be played and enjoyed by everybody - all ages from 4 to 74 regardless of gender or ability - and to have the backing of someone like Jamie is brilliant.”

And Jamie said: “If I hadn’t chucked a ball about and had fun at Hillfoots when I was a kid then I wouldn’t be in the position I am now so it was an honour to go back there and if I can inspire other kids like me to follow their dreams then that is great.

“I loved playing rugby at County and Melrose too and all three clubs hold a special place in my heart and have helped my progress no end.

“To think that when the boys were preparing for the last World Cup in 2015, I was still playing club rugby is quite mad, but I have put in the hard yards and I certainly take nothing for granted.”

Despite being grateful for his rise in the game over the last few years, Bhatti still feels like he has something to prove to a number of people in the coming months.

He was a regular in the Scotland matchday 23 from the aforementioned November 2017 games until the 2018 summer tour.

He then missed out on the 2018 Autumn Tests and played a bit part role in the Six Nations earlier this year.

At the same time, he was told that he was not going to be offered a new contract with the Warriors and he decided to secure his future by signing for Edinburgh Rugby ahead of the 2019/20 campaign.

BREAKING ?? | Scotland international prop Jamie Bhatti will join the club on a two-year deal from @GlasgowWarriors this summer #WelcomeJamie pic.twitter.com/65hoCv2nNE

Bizarrely, he then started most of the big games for Glasgow in the 2018/19 run-in in April and May, including the PRO14 final defeat to Leinster at Celtic Park.

Now in camp with Scotland ahead of the World Cup in Japan in September, he is battling it out with Allan Dell and Gordon Reid for the likely two loosehead spots in the final 31 man squad.

“I do feel like I have a point to prove,” Bhatti said.

“I would loved to have stayed on and played at Glasgow, but that is the way rugby is at times.

“When I was looking for a contract around Six Nations time they didn’t want to sign me, they’d signed Oli Kebble and Alex Allan so then Edinburgh came in and I went and met with Richard Cockerill and had a coffee and really liked what he had to say.

“It was just a tough time in and around the Six Nations, being at Glasgow and not playing much and going into the Scotland training camps, but then not making the matchday squads.

“I was coming back from the Scotland camp and I wasn’t getting picked for my club and I was wondering what else could I do.

“You learn though and I feel stronger for it.”

And, having got through that tough spell, he is now ready to show everybody what he is really all about.

“I’m confident coming in here to the Scotland camp given the way the last few weeks of the season went - I feel like I got my opportunity again and I took it,” he stated.

“I played well against Ulster and got the nod against Leinster when we got the win across there, started against Edinburgh and then in the semi-final and the final.

“I was playing some of my best rugby in those games. That came at a good time to get selected for the Scotland camp and I came here in a bit of form.

“It’s just about giving it my all just now and then in the warm-up games [in August and early September] if I get my shot."