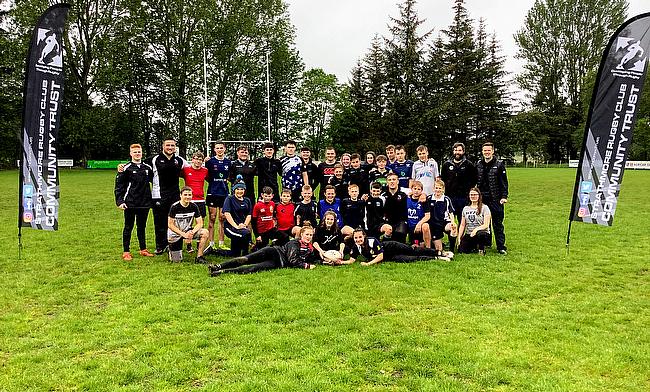 Jamie Bhatti's rugby journey is an inspirational tale as World Cup comes into view
Scotland international Ross Ford announces retirement
Brown: Not many people focus on ‘the other side’ of rugby
Graham flourished at under-20 level and he is now keen to keep soaring in the big time

This week Strathmore Rugby Club Community Trust welcomed The Earl and Countess of Forfar to Perthshire to showcase all of the great projects that are going on to take the sport to as wide an audience as possible.

Under the watchful eye of Josh Gabriel-Clarke, the Community Project Coordinator, there is a thriving Rugby Academy in the area; Strathmore Clan Unified RFC and Autism-friendly rugby for children, plus much more.

All of this is well supported by Strathmore RFC and the wider community while there are two special ambassadors who are available to help Gabriel-Clarke and the other staff and volunteers when required.

They are Scotland caps Matt and Zander Fagerson and Gabriel-Clarke told TRU: “Matt and Zander are fantastic ambassadors for the Strathmore Rugby Club Community Trust.

“Both local lads, they are very grounded, family men - which makes them wonderful role models for children - they always connect well with everyone when they are around and the kids love meeting them.

Cracking afternoon for @TRI_Rugby Unified Rugby @FraserburghRFC... brilliant spirit, with lots of smiles! Thanks to hosts & well done all the Clans & volunteers

“Best of all they aren't afraid to get stuck into the sessions when they visit! We wish them the very best of luck with Scotland over the summer and hope to see them both in Japan.”

Matt Fagerson, who turns 21 on July 16, is the youngest member of the 44-man extended Scotland squad currently preparing for the World Cup in Japan which begins in September.

The Glasgow Warriors back-row made his full international debut last summer in the USA and has older brother Zander - a 23-year-old tighthead prop - with him in the squad.

Back in 2016 when Fagerson junior left Strathallan School, many involved in the game north of the border knew he had the potential to go far.

In his first six months out of school, he impressed with Glasgow Hawks in the Premiership and made his Warriors debut despite still being an Academy member.

He also quickly became a key man for the Scotland under-20 side and in an interview at the time he said:  “It was great to be offered a place in the Scottish Rugby Academy on leaving school, but it was a bit strange when just a few weeks after I had turned 18, I was training with guys I had watched on TV like Jonny Gray, Josh Strauss and Ryan Wilson.

“I guess the thing you first notice is the change of pace when you make the step-up to the pro game and the amount of preparation that goes into each match and analysing opponents.”

Fagerson has more than got used to that pace in the last two and a half years since those comments in January 2017 and he would likely have more Scotland caps to his name already had it not been for untimely injuries.

He comes across as a very measured and calm customer, but he has revealed that he and his team mates are now really feeling the heat as they aim to make it into the World Cup squad.

It is not because Head Coach Gregor Townsend is flogging them out on the training pitch that they are beginning to sweat, rather the heat chambers that come after training which are making them hot under the collar.

The idea of staying in the water which is cranked up to 45 degrees is to prepare the players for what they might face in Asia during the showpiece event in a few months time.

?? SCOTLAND CAMP (1/2) | After a tough day yesterday, today was about regulating the load on Scotland's #RWC2019 training squad to allow us to get the most out of other sessions #AsOne pic.twitter.com/tz1I729PRg

“You’re submerged in a pool that’s about 45 degrees, it’s like going into a hot bath, a HOT bath,” Fagerson stated from the Scotland camp.

“The air around is about 40 degrees as well, it is 10 times worse than a sauna, just horrible!

“We spend 20 minutes in there but the boys look like they are going to pass out after 15. It is quite a mental test as well as physical.

“However, we know all of these sorts of things will come in handy further down the line so we are all sticking with it for now.”

Fagerson knows there is big competition for back-row spots in the final 31-man squad to be named to travel to Japan, but he is giving it everything to make the trip.

“The talent and the depth in the back-row is pretty tough,” he admitted.

“Barcs [John Barclay] has just come back from his injury and played a few games at the end of the season, same with Blade [Thomson], and then you have guys like Ryan Wilson, Jamie Ritchie, Maggie [Magnus Bradbury], Gary Graham and Sam Skinner.

“It’s a pretty competitive back-row, so I’m just trying to train as well as I can and put my best foot forward. I really enjoyed my rugby at the tail end of the season with Glasgow. I felt I was bringing a lot of energy to the team out there on the pitch and I was just loving going out there and playing.

“It’s not ideal to finish the way we did by losing the PRO14 final, but there’s plenty more to come from the Glasgow group and this Scotland squad.

“I am just loving my rugby right now and the exciting things that are going on and trying to take it all in.”

Pro14 game between Edinburgh and Glasgow to have limited spectators