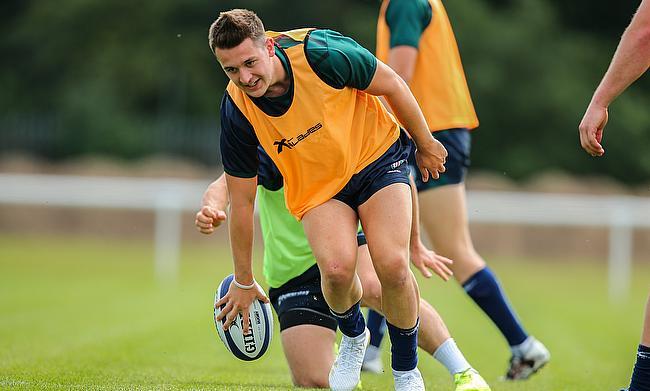 Round Four in the Greene King IPA Championship was a good week for Nottingham, Hartpury RFC and London Scottish who all secured excellent wins whilst the early front runners didn't falter. Connor Hickinbottom has the latest for TRU...

London Scottish grabbed their first win of the season with an outstanding second half display against Jersey Reds.

Jersey produced a dominant performance in the opening 40, scoring four tries in the process, to open a 24-10 lead.

The hosts began the scoring through a Rory Jennings penalty, swiftly followed by a Charlie Ingall try – the winger throwing an audacious dummy to evade the Reds defence to score.

The Exiles 10-point gap was quickly diminished as the Reds powered their way up field before an excellent grubber kick cut London Scottish apart and allowed Leroy Van Dam to go over for his first try of the day.

Just minutes later and the Reds were scoring again, this time through Auguy Slowik. An outstanding tackle in midfield forced a knock on from the Exiles and allowed Slowik to kick the ball downfield. The winger displayed some excellent football skills to work the ball up the pitch to score.

??? LSTV | Man of the Match @RoryJennings & Head Coach Nic Rouse give their post match thoughts to LSTV after the Scots secured their first win of the season over Jersey Reds yesterday ????

With the momentum behind them, Jersey didn’t take their foot off the gas as Nick Selway got amongst the act. The hooker was the beneficiary of a powerful maul from the Reds, extending the lead to 17-10.

There was still time for the Reds to grab a bonus point try before the end of the half as Van Dam scored from another exceptional kick.

The Reds must have thought they were home and dry going into the second-half, however, that dream was shattered after just a minute as the Exiles came out firing. Joe Luca Smith touched down in the corner after an excellent cross-field kick – Scottish giving Jersey a taste of their own medicine.

Jennings added a second penalty before a Billy Harding try on the hour mark secured the first victory of the season for the Exiles.

This made it three defeats from three games for Jersey who will be hoping for better luck at home against Yorkshire Carnegie tonight.

The boot of Luke Cozens proved to be the deciding factor as two penalties from the fly-half sealed the victory.

Despite the horrendous conditions, the hosts started brightly. Two tries within five minutes from Will Tanner and Mat Gilbert from close range opened up a 14-0 lead.

Coventry were able to add a try of their own before the half was up as scrum-half Pete White slid over from close range for an easy score.

Two penalties in quick succession after the break extended Hartpury’s lead further, but Coventry continued their fightback. Replacement scrum-half Tom Kessell proved to be the spark for the visitors as the former Northampton Saints man surged through a gap in the Hartpury defence before his quick thinking put James Stokes over.

A penalty from Jake Sharp put Coventry within three and set up a tense finish for the hosts.

Unfortunately for Cov, the comeback was short lived as Cozens added a third penalty to win the game and send Coventry back to the West Midlands disappointed.

Ealing moved up to second in the league with a bonus-point victory over Doncaster Knights.

The Knights were dealt their first home loss of the season as Ealing put on a dominant display, scoring five tries in the process.

Donny got the game started through the boot of Kurt Morath, but this initial good start was short lived as Ealing began their domination.

The Trailfinders got off the mark through James Cordy-Redden as the winger latched on to a Peter Lydon chip for the first try of the game.

?? REACTION: Man of the Match Pat Howard and Director of Rugby Ben Ward spoke to England Rugby TV after the bonus point win over Doncaster Knights:https://t.co/gmQK8nuJb1

Ealing’s control continued as Lewis Jones powered through three Donny defenders to make it 14-3. A third try followed for Ealing as scrum-half Luke Carter danced his way through the Knights defence before offloading to the onrushing Lydon.

There was a glimmer of hope for the Knights at the end of the half as James Malcolm dived over from the back of a powerful driving maul.

A second try for Cordy-Redden extended the Ealing lead but a quick reply from the Knights reignited the hope of a comeback as big Joe Sproston charged through a gap and left the Ealing defence reeling. Quick thinking saw a kick put over from Tom James to the onrushing Curtis Wilson for a try in the corner.

The tide had turned as the Knights continued to fight their way back and the hosts added another try through William Ryan and a penalty from Morath to close the gap to 22-28.

However, It was a short-lived comeback for the hosts as a penalty from Lydon and a try from Jack O’Connell secured the victory for Ealing, putting them just five points behind Cornish Pirates.

Cornish Pirates continued their perfect start to the season with a bonus point victory over Richmond.

It was a record breaking 11th straight victory for the Pirates and a fourth consecutive bonus point win.

Richmond got the game started as they dominated the Pirates in the scrum, earning several penalties before Sam Edgerley dotted down in the corner.

4 wins from 4, maximum points and top of the Championship tonight! #COYP pic.twitter.com/I61smvUt1z

The Pirates were buoyed by this and immediately went on the offensive. Will Cargill added three points from the tee before a penalty try was awarded to the hosts and Ross Grimstone was sent to the sin-bin for 10 minutes for Richmond.

It was a frantic end to the half. Sam Matevesi continued his fine start to the season with a try only for Cam Hudson to respond with a score for Richmond. The Pirates then hit back with a try from Robin Wedlake to secure a 22-10 lead going into the half.

The Pirates started the second-half like they finished the first and added their fourth try shortly after as Alex Day took a quick penalty to dart in from the back of a scrum.

Richmond added a final try at the death to save some face as Ronnie McLean dotted down for the visitors.

The Green & Whites were rampant on their travels, scoring five tries on their way to a 36-17 victory.

An injury depleted Carnegie side took the lead as Brendan Cope notched his only penalty of the afternoon, but they weren’t in front for long as Seb Cecil scored his first try of the afternoon for Nottingham

Carnegie were soon down to 14 as Mike Myerscough was shown the yellow card. Nottingham were quick to punish this as they executed a fantastic move from a driving maul for Luke Peters to finish.

A reversal in sin-bins saw Danny Qualter dismissed for 10 for Nottingham and Myerscough returned to action for Carnegie. This man advantage was quickly utilised as Dylan Donnellan dotted down for the score.

With the momentum firmly behind them, Carnegie added a double after the break as George Watkins dived over in the corner to give the hosts the lead for the first time since Cope’s early penalty.

A stunning individual try from David Williams put Nottingham back on top within a minute as the winger broke from 60 metres out to notch a memorable try.

Further individual brilliance followed, this time from Shane O’Leary. The fly-half added a penalty to extend the lead before rushing in from half-way to secure the bonus point for the visitors.

Nottingham added another try shortly after to round off a perfect performance with Rory Burke diving over from close range.

London Irish secured their third straight win of the season with a five-try victory over Bedford Blues.

It was far from a vintage performance from the Exiles as the hosts finished with 13 players on the field after a yellow card to Harry Erlington and a red card for TJ Ioane, but they were still able to do enough to secure the win.

Irish opened their account through Tom Parton as the academy graduate brought in Stephen Myler’s kick for a score in the corner. Myler went from provider to scorer minutes later as the fly-half found a gap in the Blues defence to increase the hosts lead to 12-0.

The Exiles were in full flight and added to their advantage to 19-0 on the half hour mark. Parton was the man once again as the full-back showed outstanding feet to jinx past the Blues defence and grab his second of the afternoon.

Bedford were finally able to get onto the scoreboard through Alex Rae as the scrum-half finished from the back of a driving maul.

Thank you to everyone who came out today for your brilliant support and credit to @BedfordBluesRFC for a well fought game.

The Blues added further points after the break with Ed Coulson slotting a penalty to make it 19-8.

Irish’s forwards must have felt slightly scorned by Rae’s try as they produced a carbon copy of the Blues’ score in the exact same place, showing that anything their visitors could do they could do better – Dave Porecki the beneficiary.

A lapse in judgement by the Blues allowed Irish to cross the whitewash once more as miscued clearance kick fell right into the hands of Tom Stephenson who raced in.

The Blues threw everything they had at the Irish line and with Erlington and Ioane now off the pitch they found themselves back in the game. Jarad Williams went over from close range with10 minutes left to set up a grandstand finish.

Unfortunately, for the visitors, Irish remained strong and despite a late Oli Curry try, there was to be no miracle comeback.