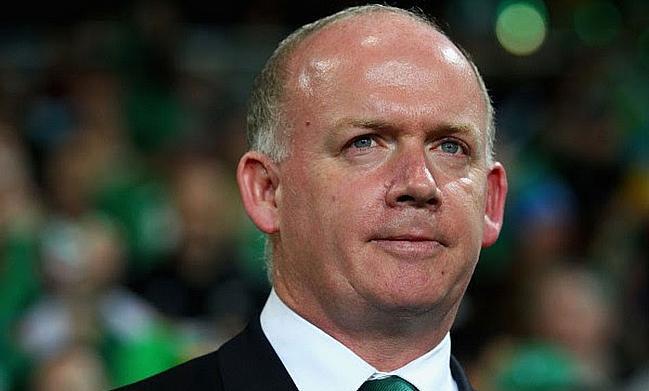 London Irish continued their perfect start to the Greene King IPA season, but Cornish Pirates' winning record was ended in Round Five while London Scottish, Richmond, Jersey Reds and Nottingham all secured victories.

Jersey claimed their first league win of the season with a dominant bonus point victory over Yorkshire Carnegie.

The Reds’ first game at home brought with it their first triumph as they ran riot against Carnegie, scoring five tries in the process.

In just five minutes, the hosts had a 14-point lead, skipper Roy Godfrey and scrum-half Will Homer grabbing the tries.

Carnegie were briefly back in the game when Tom Bullough cut through the defence at pace, cutting the lead in half. This try failed to halt Jersey’s momentum as the Reds added two more scores before the end of the half.

Here are the highlights you've been waiting for as the Reds ran in five tries against @carnegierugby - thanks to @3Ci_Sport #JerseyRedsTV - https://t.co/l1nCIk1V4f

Hooker Charlie Maddison finished off a powerful rolling maul before Jerry Sexton went over in the corner to secure a try bonus point before the end of the first period. Aaron Penberthy notched both conversions and a penalty to extend the half-time lead to 31-7.

Carnegie went on the offensive after the break and were swiftly rewarded as former Reds fly-half Brendan Cope found a way through a resilient Jersey defence to put Chris Elder away for the visitors’ second try.

The Reds remained solid throughout the second-half, keeping the persistent Carnegie offence at bay. It was actually Jersey who scored next as they crushed any hope Carnegie had of a comeback. Nick Selway scored from yet another powerful rolling maul from the hosts.

There was a consolation try for the visitors as Dan Temm crossed from a quick penalty, but ultimately, it was too late.

The victory for Jersey means they jump above their opponents into 10th whilst a three-game losing streak means Carnegie slip to the bottom of the table.

Five penalties from the boot of Shane O’Leary helped Nottingham edge out Doncaster Knights in a closely fought encounter.

Despite outscoring Nottingham two-tries to one, the constant ill-discipline from the Knights was enough to gift the Green & Whites the victory.

It was the Knights who started the strongest, scoring after just eight minutes through a try from Josh Tyrell following a textbook lineout.

The second-half began like the first as the Knights grabbed another early try as Steve McColl finished superbly in the corner. Unfortunately for the Knights, the conversion was missed giving them just a three-point advantage.

Donny’s slim lead was cancelled out as O’Leary was once again given the opportunity to kick at goal. With the game level the hosts took control of proceedings, former Knight Sean Scanlon left Donny rueing their ill-discipline as he raced clear for Nottingham’s only try of the game, securing the victory for the home side.

Cornish Pirates suffered the first loss of their season at the hands of Ealing Trailfinders in a blistering game at Vallis Way.

It was an 11-try thriller between the top two teams in the Greene King IPA Championship, Ealing just outscoring the Pirates by six tries to five.

The game started at breakneck speed as the hosts looked to exploit the Pirates with their pace. The Trailfinders stretched their visitors with a well worked line-out move to allow a pinpoint cross-field kick to be put up. Guy Armitage jumped highest to get the first try of the game.

The Pirates responded well, grabbing two excellent tries from Josh Caulfield and Robin Wedlake. This lead was short lived as Ealing split the Pirates apart with quick play and even quicker hands as Seb Stedmann finished off a break from deep.

Craig Willis added another for Ealing, finishing in the corner. The Pirates then added a penalty to close the game, but another Stedmann try left the visitors with a 13-point deficit to think about during the break.

A blistering start to the second half by the Trailfinders created even more work for the Pirates, the hosts scoring two tries either side of a Will Cargill penalty to make it 38-16.

Cornish could not break down the Ealing defence, even after Andrew Durutalo was sent to the sin bin for 10 minutes. It was the hosts who scored during this period as Willis notched his first penalty of the game.

Ealing’s stranglehold on the match ended on the hour mark as Cornish Pirates finally found a way through the stubborn Trailfinders defence, scoring three tries in the final 20 minutes to earn two bonus points.

Kyle Moyle grabbed the first in the Pirates fightback before Wedlake scored two, earning a try bonus point and a losing bonus point for the visitors whilst also securing a hat trick for the winger.

Despite the loss, the Pirates remain at the top of the table, just two points ahead of the Trailfinders.

London Scottish secured back to back victories with a narrow win over Bedford Blues.

The Exiles, who won by a single penalty in their previous outing, once again had the boot of Rory Jennings to thank for their victory. The fly-half slotted three penalties, including the winning kick with just a minute left to play.

Bedford took control of the game early on as Dean Adamson went over inside two minutes after running the full length of the pitch following a clever intercept before Ed Coulson grabbed his first penalty of the afternoon.

The Exiles were quick to respond as Rob Stevenson raced onto a chip over the Blues defence for the converted try.

The action continued as the hosts extended their lead further. Tadgh McElroy powered over after a well worked lineout move to make it 15-7.

Jennings added two penalties either side of a Coulson kick to put the Exiles behind by five points at the half.

Scottish came out more aggressive in the second half and were rewarded with back-to-back tries.

Stevenson grabbed his second of the game, ghosting straight through some woeful defence from Bedford to level the scores. The Exiles scored again shortly after, once again cutting through the Blues with ease to allow flanker James Tyas to score in the corner.

Defensive frailties were now creeping into Scottish’s game as well as their hosts. The Exiles allowed Richard Lane to walk through their defence from the restart who set Ryan Hutler up for the simplest of tries.

With the game level, Scottish were awarded a penalty right in front of the posts, Jennings duly obliged with the finish to secure the victory for the visitors.

London Irish had to dig deep to inflict Coventry’s first home defeat in over a year.

The Championship new boys made things difficult for Irish and showed that they can really compete at this level.

Coventry took the lead through a Jake Sharp penalty after 11 minutes but were immediately caught out as Dave Porecki capitalised on an excellent line-out move from the visitors to power over for the converted try.

An uncharacteristic lapse of judgement allowed Coventry right back into the game as Sam Tuitupou raced in under the posts with Irish looking bemused as to how it had happened. Sharp’s conversion put the hosts back in the lead

Buoyed by their half-time speech, Irish came out determined to break down the Coventry defence. Their pressure was rewarded with consecutive penalties which Myler dispatched with ease.

Coventry’s morale did not diminish as they continued to throw everything they had at their visitors’ defence. It looked as though this pressure had paid off when David Halaifonua touched down, only for the try to be disallowed for a forward pass.

Halaifonua continued to torment the Irish defence and his good work did eventually result in a try. The winger earned a lineout deep in the Irish half which resulted in a Scott Tolmie score.

The hosts now had a 17-13 lead going into the final quarter of the game, but unfortunately, it was not to be for Cov as Irish’s class shone through. Brendan Macken scored a scintillating try to reclaim the lead before Myler added a final penalty to ensure the Exiles’ perfect start to the season remains intact.

Richmond put on an outstanding performance to score six past Hartpury and put an end to a three-game losing streak.

‘Mond were relentless all game as they looked to make amends for the previous outings in front of their home crowd.

Hartpury, who began the game in search of back-to-back victories, notched the first try of the match as Richmond old boy Rupert Harden went over at the back of a maul.

The hosts shut down any fears of another Championship defeat instantly, charging down a clearance kick giving Cameron Hudson the opportunity to finish in the corner.

The game continued at a breakneck speed as Richmond grabbed another try as the ever-reliable Rob Kirby latched on to a ball from Jono Woodward to score Mond’s second try and his second conversion of the afternoon.

With the momentum now firmly behind them Richmond were in again; Woodward transitioning from provider to scorer to give the hosts a 19-7 lead at the half.

Richmond showed no signs of letting up once play restarted and that man Woodward once again found himself in the right place as the winger securied a try bonus point for the hosts.

After several disappointing results, ‘Mond were now putting on a masterclass for their fans at the Athletic Ground as they had the game all but won in the 47th minute. Ed Milne powered over from close range to make it 33-7.

Hartpury put on a valiant display but it was simply not their day. They went close on several occasions but to no avail. To make matters worse Richmond added a sixth try through second-row Chris Davies.

An Iain Grieve try at the death was little more than a consolation score for Hartpury who now find themselves in the bottom two following this defeat.