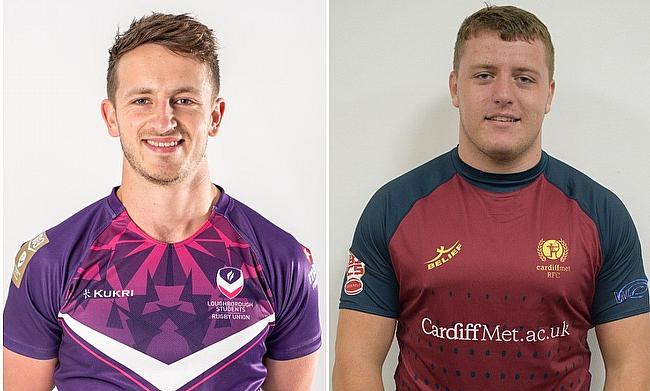 “To have the legendary Bill McLaren commentating was the icing on the cake”
Taylor boxing clever as he aims to keep as fit as possible
Sally Stott: “I will treasure the years I have spent playing for Edinburgh University”
BUCS Super Rugby graduates Duff and Forrester cross paths at Moseley

Currently there are no Scottish university sides in the BUCS Super Rugby competition, but two players who have represented the Scots internationally at various levels impressed during the 2019/20 campaign.

Indeed, scrum-half Alex Glashan and tighthead prop Will Hurd, of Loughborough and Cardiff Met respectively, played so well in the showpiece student event this season that they were named in the Team of the Year.

“It is great to be able to represent Loughborough in the Team of the Year and a nice way for me to end my three years with the team,” Alex, 25, told TRU.

“I really have had a great time playing for Loughborough, it has been up there with my best rugby memories to date and the coaching and the facilities there are top notch.”

Will, 20, told TRU: “Cardiff Met has been the best place for me and my rugby, the coaches and my team mates over the last three years have really driven me on and scrum coach Alun Williams has really put in the hard yards with me to help me get better and better.”

In the latter years of senior school, the Academy first XV had some great success - winning Scottish Schools Cup finals at under-15 and under-18 levels at Murrayfield - and in that team Chris Dean, now with Edinburgh Rugby, and Alex were amongst the key men.

“At that stage Deano was a No.8 and I was scrum-half and we enjoyed that link-up,” Alex recounts. “Chris is of course playing centre now and it is great to see him doing so well, we all had great times in that school team.

“In my second last year of school, I played for Scotland under-18s and in the following season I captained that side which was a great honour.

“When I left school in 2012 ,I was offered a development contract with Scotland Sevens for two years. It was an exciting chance for me and there were a few younger guys brought in to integrate with the more experienced guys and, before I knew it, I was making my World Series debut in Gold Coast in Australia.

“Physically it was a big step-up from under-18s and schools rugby, but I loved every second of it over those two years, being able to play a number of tournaments over the two years, seeing some great places and learning a hell of a lot.”

Here is your #BUCSSuperRugby Team of the Year! ??

It was also great that Alex got to go through that experience with old friend Chris Dean and the duo were called up for Scotland under-20s to play in the World Championship in the summer of 2014.

Alex then joined up with Edinburgh Rugby for 2014/15, but did not get the game time he was after at that stage of his fledgling career.

For the next couple of years, he played club rugby for Edinburgh Accies before heading down south to Loughborough University in the summer of 2017 where his love for rugby reignited.

“I spoke with Isaac Miller [a fellow Scot now at Worcester Warriors] who had been captain of the Loughborough rugby side and he told me I would enjoy it down there so I started a sports science degree in 2017/18,” Alex explained.

“Isaac wasn’t wrong, the rugby side of things at Loughborough has been brilliant. We play on Wednesdays in BUCS and on Saturdays [in RFU competitions] so it is about getting the balance right and I have played in both over the years.

“This season just gone, I mainly played BUCS - along with some Saturday games - and I loved it alongside being captain. The fast pace and good pitches in the Super Rugby competition suits my style of game and you are playing with and against some of the best young talent in the country so that is a good test.”

Will grew up in Leicestershire and started his rugby journey at local club Ashby. I played for them from when I was about six until I was 15/16 and I really enjoyed being there with all of my mates,” he said.

“The next step for me was Loughborough College and because the coach there at the time had a good connection with Nottingham, I managed to earn a place in the Academy there and was in that system for a year and a half to two years.

“I learnt a hell of a lot at the Nottingham Academy at and the time I was also representing the Midlands and things like that so I was getting plenty of rugby under my belt. The physicality and tempo of the games during my time at Nottingham made me realise the standards I had to hit every time I took to the field.

“I was also playing loosehead and tighthead at the time, but I really worked hard to get better at the latter and that is where I have played most of my rugby since.”

In the summer of 2017, Will moved to Cardiff Met to study business management with marketing and in his first year, he continued his learning curve in the number three jersey by playing for the Saturday team in the WRU leagues.

“Last year [2018/19] I met Danny Wilson [who is set to become Glasgow Warriors head coach ahead of 2020/21] during our pre-season at uni and I was talking to him about my Scottish connections and, after playing the first half of the BUCS season, I was delighted to be able to represent Scotland at under-20 level in the Six Nations and World Championship of 2019.

“My grandma on my mum’s side of the family grew up in Scotland, so mum was fairly chuffed when I got to represent the country.

And during the season just past, Will showed himself to be one of the best scrummagers in BUCS Super Rugby, starting the majority of games for Cardiff Met and taking on a leadership role.

Will is due to graduate this summer, but keep an eye out for where this exciting young talent goes next.