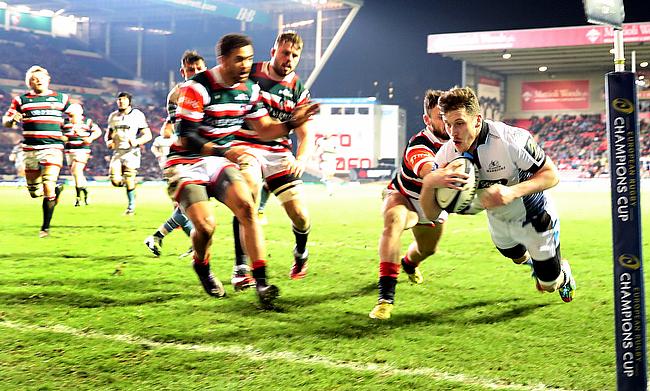 Glasgow's Mark Bennett dives in for a try at Leicester
©PA

Glasgow Warriors are set to make their first appearance in a knock-out game of European Champions Cup after they blanked Leicester Warriors by 0-43 at Welford Road on Saturday.

Wing Tommy Seymour scored the opening try in the fifth minute following which Scotland international Finn Russell had a conversion and a penalty to take the lead to 10 points.

Leicester Tigers were hampered further when Mathew Tait was sin-binned, resulting in a penalty try for Gregor Townsend's men. Centre Mark Bennett (29') and lock Jonny Gray (35') scored two more tries in a span of six minutes to make it 31-0 at half-time.

Flanker Ryan Wilson (47') and lock Tim Swinson (60') further compounded Leicester Tigers problems with two more tries in the second half as they went into the quarter-final with a 43-point triumph.

This was also Leicester Tigers' worst defeat in an European competition, surpassing 0-38 loss they suffered to Munster earlier this season.

"We just weren't good enough. There's nothing we can take out of the game as a real positive.

"It was clearly embarrassing for all involved and it's not a situation I've found myself in through my career, I've always been part of successful sides.