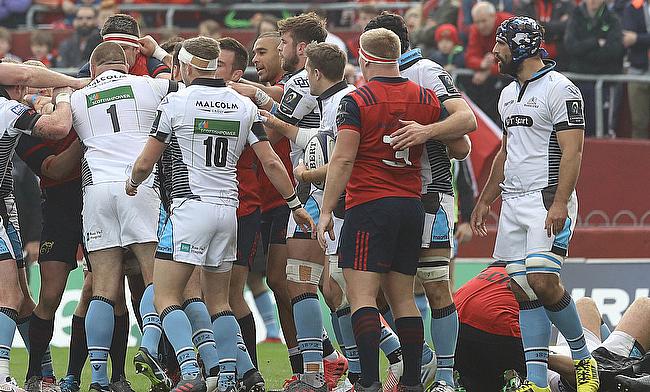 Glasgow Warriors forwards coach Dan McFarland has urged his team to emulate the passion of Munster ahead of the European Champions Cup clash between the two teams on Saturday at Scotstoun Stadium.
©PA

Glasgow Warriors forwards coach Dan McFarland has urged his team to emulate the passion of Munster ahead of the European Champions Cup clash between the two teams on Saturday at Scotstoun Stadium.

Glasgow are currently placed second in Pool 1 with 13 points from four matches while Munster top the table with 16 points.

A win here for Gregor Townsend's men will seal a spot in the play-off for the first time in the European Champions Cup but a defeat will put them in a tricky situation as they face the third placed Leicester Tigers in the final round.

The 44-year-old believes Glasgow Warriors must be at their best, if they are to upstage their Pro 12 rivals.

"There will be a host of challenges on Saturday. Munster are an excellent team who have been doing really well.

"They are a side who plays their style really well. They have a clear game plan which they execute excellently.

"They have also ridden an emotional wave through a very difficult period and shown their toughness and resilience, so that mental aspect is one part we'll have to cope with.

"That first European game took place on a very say and emotionally poignant day. But they rose to it with an incredible belief and passion.

"But Munster have always been like that. They are still bringing that passion. Munster teams have always brought passion to their play, but so do Glasgow Warriors. We will see our players hopefully on top of their game and certainly with their utmost desire to win."

The last time these two teams faced off each other at Scotstoun was in December when Munster managed to edge out Glasgow Warriors by one-point riding on a late drop goal from Ian Keatley. However, McFarland believes the situation is different now.

"That was a different scenario," he said. "That game came just after the November Test window, so both sides were without certain players who needed a rest.

"But that's not the case now. We'll be sending out the best 15 players we can and everything is at stake."