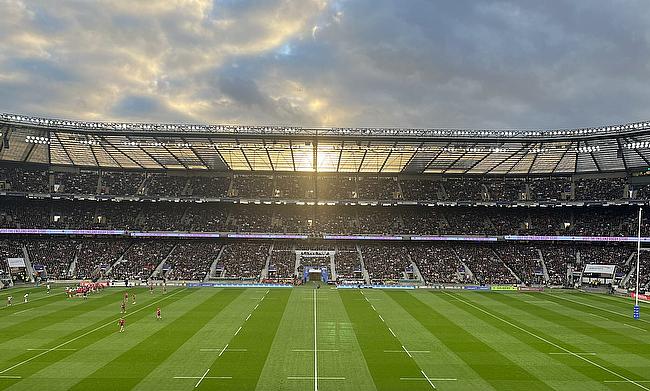 England welcomed 81,022 fans back to Twickenham on Saturday
©JH34M

England's Autumn Nations Series campaign got off to the best possible start on Saturday afternoon, with Eddie Jones' side putting 11 tries past Tonga at Twickenham.

It was only 90 minutes before kick-off that George Furbank was confirmed as starting the game at fly-half, with Owen Farrell testing positive once more for Covid-19.

Courtney Lawes took on the captaincy and both of the Northampton Saints men made an impact as England subjected the Pacific Islanders to a 69-3 loss at Twickenham.

Adam Radwan got scoring underway early on, as England’s pressure won them good field position, the Newcastle Falcon showing good power. Henry Slade missed the conversion, a shaky day for the Exeter Chiefs man from the tee on the whole, but he wouldn’t be short of further opportunities.

A score for Jamie George followed, the Saracen doing what he does best at the back of a maul. Sonatane Takulua get his team on the board not long after, but any hope of a further resurgence was smothered out sharply.

Not long after a Furbank break, in which the 25-year-old was on the receiving end of a high shot, England scored again. This time it was Jonny May to benefit, the Gloucester wing sent over by Freddie Steward and some wayward defending by Solomone Kata.

Maro Itoje galloped over after strong carries from Ellis Genge following a lineout steal, the try coming moments after Kata was shown yellow after a collision with May in the air.

To the 81,022 fans who cheered us on today, the players have missed you. Thanks for your support ??#ENGvTON pic.twitter.com/nL92LMfD5I

Tonga were kicking themselves not long after, Telusa Veainu intercepting the ball, turning his former apprentice Freddie Steward inside out, only to be subdued by stand-in captain Lawes who showed great desire to hunt down his man.

Ben Youngs closed out the half with a well worked try and began the second half in the same fashion with a similarly energetic burst, the second coming after walter Fifita’s deliberate knock-on that resulted in a yellow card.

Marcus Smith’s introduction to proceedings caused a roar louder than any heard for the tries before then, the 22-year-old getting more praise soon after when converting May’s second five-pointer.

Things went from bad to worse for Tonga as the game wore on, as replacement back Viliami Fine was red carded for striking Mark Atkinson on the ground. A Jamie George score came from the next play, another maul that was too strong for Tonga to handle.

Smith got another ovation for his try, England returning a Tonga kick to the whitewash, Henry Slade carving through before offloading to his fly-half to score. Smith was the instrument to help Jamie Blamire to his fifth international try in three appearances.

Alex Mitchell marked his debut with a try, denied earlier on, he showed the footballing skills of his look-a-like Gary Neville to guide the ball home and flop on it to score the game’s final try and for Smith to end the day with another conversion to his tally.

The start of England's push to be ready for the Rugby World Cup in 2023, Eddie Jones was pleased with what he saw from this developing group of players.

"We saw the mindset of being aggressive in attacking the opportunities," Jones said. "That is what we have been working on."

"The mechanics of it will be a constant fine-tuning and the only time you need to see that at its best is when we play the seventh game of a World Cup."

The next big question surrounds Owen Farrell. Managing well in his absence today, whether or not the 30-year-old will be available next week remains to be seen.

Amid specualtion that his positive Covid-19 result came as a result of a false-positive, Jones says that the fate of his captain comes down to the government.

“It is very clear and very simple, we are just following the Covid regulations and protocols and are awaiting further guidance,” said Jones.

“It is not my decision, it is Public Health (England), so we just leave it to them and we are just waiting. We have done everything we are supposed to do.

"We knew 100% he wasn’t going to be involved (on Saturday) morning, and in terms of when he is going to get out (of isolation), if you could give a ring to Public Health England, that would be most appreciated.”