Gareth Steenson Exclusive: “At times he is dragging the team along with him!” 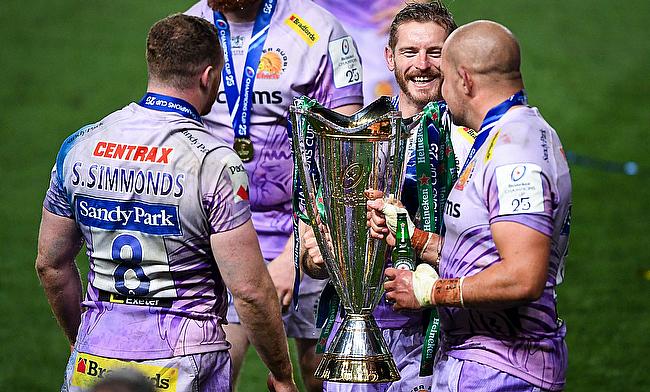 The conversation around Sam Simmonds and an international call-up is reaching a stage where it surely cannot be ignored for much longer.

Last weekend, Exeter Chiefs and England fans alike watched on as the dynamic No.8 helped the champions recover from a 13-0 deficit to clinch a victory full of character and determination against Bath.

As every round of Gallagher Premiership action passes by, Simmonds’ stock only rises, but the campaign to see him included in Eddie Jones’ plans is beginning to sound like a broken record.

Despite topping the try-scoring charts with a ludicrous 13 touchdowns in 12 domestic games this term - as well as sitting towards the summit of most of the other key statistics in the league - the 26-year-old continues to be overlooked by England.

“It is great to see him in a Chiefs shirt!” Exeter coach Gareth Steenson tells TRU. “Obviously, you want Sam and anybody else to achieve all the things they can achieve in the game, but we can only control what we can control here.

"Has the England squad become harder to get out of, than it's become easier to get into?"

"I don't think there is enough fear in those England players."@IamAustinHealey & @dallaglio8 have their say...#RugbyTonight pic.twitter.com/ezFwj2u0FJ

Steenson, who hung up his boots at the end of last season following a hugely successful playing career at the Chiefs, has seen Simmonds develop from an academy graduate into one of the leading players in Europe.

Despite all the accolades and plaudits which have come Simmonds’ way, the back-rower hasn’t pulled on an England jersey for almost three years.

Jones did recently admit “it is now time to start changing the [England] team” as preparations continue for the 2023 World Cup in France, but the faith shown in his regulars has been scrutinised during this year’s Six Nations championships, especially when players such as Simmonds are repeatedly performing well.

Whilst England continue to turn a blind eye to Simmonds’ talents, the forward could well be in contention for British and Irish Lions selection. Last Saturday, head coach Warren Gatland witnessed the qualities of the No.8, and the idea that the Exeter Chief could face South Africa this summer is certainly not an outlandish suggestion.

“Right from the moment he came into the system, you could see Sam’s talent,” Steenson adds. “He has still got things to work on like every player does, but he is bringing that explosive energy. His carrying ability, the speed at which he runs, his power in both attack and defence is really important to us.

“We obviously want to get him in the game as much as possible, but it is important we have guys around him like Dave Ewers and other guys who carry well for us. We have got a lot of people around the field who can do damage which then allows Sam to pop up in the right positions, but he does the dirty work as well.

“He gets his head over the ball, he is good over the ball and he has been great for us. He is a guy this season who has decided he is going to go out and perform. At times, he is dragging the team along with him! If he is performing well for us on a Saturday in the Premiership, he is giving himself the best possible opportunity to be selected for whatever teams are coming up!”

For now, Simmonds’ attentions will purely be on Exeter’s upcoming clash with Harlequins on Saturday, but whilst it is second versus third in the table, there will likely be a fascinating sub-plot on display at Sandy Park, with players on either side keen to send out further statements to the England hierarchy.

Similarly to Simmonds, Quins back-rowers Will Evans and Alex Dombrandt have both shone this term whilst calls for fly-half Marcus Smith to break up the long-standing pairing of Owen Farrell and George Ford continue to grow louder.

How influential has he been to @Harlequins' rise up the table?

Smith’s opposite number on Saturday is set to be Simmonds’ younger brother, Joe, who has excelled in his role as captain at just 24-years-old. His undeniable qualities have also left people bemused as to why the Chiefs skipper hasn’t had a look in with England.

“Sam’s brother is pretty good as well!” Steenson continues. “He keeps putting his hand up too! There is a guy who has captained a side to a league and European double. He is a young fella and he is still relatively young in his position. He sometimes maybe gets forgotten about, but again, he is performing unbelievably well for us and he is a great leader in our team.

“Marcus is obviously going really well for Quins at the minute which is similar to Joe, so that is an interesting match-up on Saturday. Funny, I always think when fly-halves go against each other, it is not really a head-to-head! It is more about if they can get their team going and firing in a certain direction. With outside selection people watching the game, I am sure that could be an interesting factor, but from our point of view, Joe will be focused on us and making sure our team is firing.”

Making sure Exeter were ‘firing’ was, of course, Steenson’s job for over a decade at Sandy Park, but having passed the baton on to Simmonds Jnr, the 36-year-old is now the kicking coach at the Chiefs and he is thoroughly enjoying his new role.

As a player, Steenson’s track record speaks for itself, but before becoming part of the Exeter backroom staff, the former fly-half was keen to learn his trade within the Chiefs set-up as well as with National One outfit Plymouth Albion.

“I think the biggest thing for me is that I knew my time was up,” Steenson says. “I think the thing with the first lockdown was that I really enjoyed individually training, but I remember coming back into training and getting hit for the first time and that was the realisation that these guys are younger, fitter, and stronger! At the minute, I am not missing the physicality of waking up on a Sunday with knocks and bumps or anything like that!

“I am enjoying learning something different, though. It is a new challenge. When the opportunity came up with Plymouth, it was something that I discussed with Rob [Baxter].

"it is something which I felt was good for me because ultimately, I showed everything I could do as a player and in terms of coaching-wise, I never really had the opportunity to go out and be in a coaching environment because I was so engrossed with the amount of training we were doing or captaining the side at Chiefs and all those things that come with it. I really enjoyed it at Plymouth, but it was really disappointing with the way it ended with Covid happening.”

That last comment prompts a question about the return of community rugby activity at the end of March. Steenson hopes the local clubs will be well supported when things return to normal and in short, he can relate to how thousands of grassroots players up and down the country have been feeling over the last 12 months.

“I think at every level, we now know what it is like when you are in lockdown and whether you can get back to playing again. When we were literally able to come in last season and take part in training again, it was so exciting even though it was just running around cones!

“I do understand it. Some of our young lads [at Exeter] have literally not played a game of rugby for over a year. We are not rugby trainers; we are all rugby players! At the minute, it is all looking positive so it will be great for rugby in general when everyone is back playing.”

March 29: Return to contact training without scrums and mauls. Contact should be built incrementally and RFU guidance states that training sessions should not exceed 20 minutes of contact at this stage. (1/3) https://t.co/33b7EaRXTm

For now, the recent excitement served up by the Gallagher Premiership has kept spirits high and in terms of Exeter, last week’s triumph over Bath saw them return to winning ways.

Narrow losses to Northampton Saints and Sale Sharks had raised questions about the champions’ resilience, but they looked back to their best at the Rec ahead of this Saturday’s meeting with an in-form Quins outfit.

Exeter will also be keen to improve their recent record at home after suffering defeats against the aforementioned Northampton and league leaders Bristol Bears on their own patch.

“Last time we played at home [v Northampton], it didn’t go our way so that is something which is going to be playing on the minds of the boys and they will want to go and rectify that,” Steenson concludes.

“Obviously, Quins are going really well at the minute so they are going to come down full of confidence. Our lads have trained really well this week. They are excited to get the opportunity to run out at Sandy Park and in terms of the two styles of rugby, it should make for a good game.”

And with players such as a firing Sam Simmonds amongst their ranks, the Chiefs have all the tools at their disposal to taste that winning feeling again at Sandy Park.