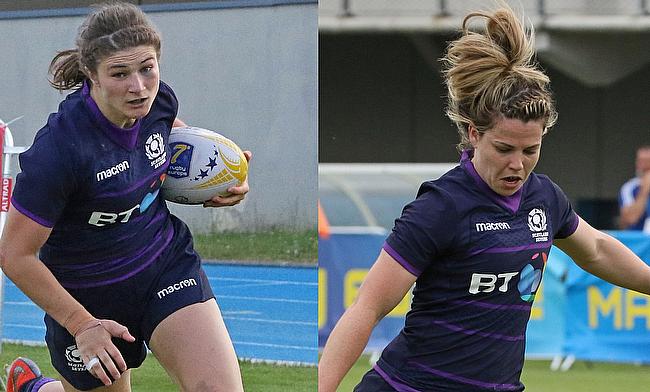 "I had to pinch myself to believe it was true!"
Scotland's Craig Jackson has had a summer to remember
Scotland star Jade Konkel aiming to shine in Tyrrells Premier 15s

TRU's Scotland correspondent Gary Heatly spoke to Lisa Martin and Helen Nelson after their recent moves across the Channel.

Over the summer, Scottish Rugby announced there would be eight contracted female players going forward to help try and take the national team to new heights.

The new deals - known as ‘2021 contracts’ - provide players with financial support to facilitate training and playing with the aim of securing qualification for the Rugby World Cup in 2021.

And the next chapter begins! Excited to join up with @LMRCV_F soon and achieve my childhood dream in becoming a professional athlete ???????????????? #hardworkpaysoff #WRugby #AsOne https://t.co/bYRbh7BAhd

Both stand-off/centres, they will be playing in France’s newly expanded Top 16 during 2018/19 with Lisa at Lille Metropole Rugby Club Villeneuvois (LMRCV) and Helen at Montpellier.

Lisa, the 28-year-old who has 41 Scotland caps to her name with more likely to come in the Autumn Tests and the Six Nations, first played the game in Edinburgh when she was seven.

Having previously played the sport mainly for Murrayfield Wanderers, she got a glimpse into a higher standard of club rugby last season when she turned out for Darlington Mowden Park Sharks in the Tyrrells Premier 15s in England.

“I think my time at Darlington was really good because it exposed me to a higher level of rugby than I had been used to week in and week out and showed me the things I needed to work on in my game,” Lisa said.

“Last year I had obviously spoken to Jade Konkel, Lisa Thomson and Chloe Rollie about playing in France and being at LMRCV when I saw them when we were on Scotland duty and they all seemed to enjoy the challenge.

“With Chloe staying over here this season, when I was offered the chance to come it was one that I was really keen to try out because these sorts of opportunities do not come along too often in a career.

“There has been a lot to learn since I got here and pre-season was a lot different than what I am used to, but as a back who is there to create things that was really good because we were practising a lot more with the ball rather than just focusing on the fitness side of things.

“Chloe has helped me to get my bearings in the local area while all of my new team mates have been great. There is the obvious language barrier, but we will get there and because there are also new coaches at the club it feels like a fresh start for everyone.”

LMRCV reached the semi-finals in the Top 8 competition last year, but in the first round of fixtures in the Top 16 they were defeated at home by Bayonnaise 27-19 in Pool 2.

Meanwhile, Helen has been reflecting on a whirlwind few months in her career.

At the start of this month the 24-year-old from Glencoe captained the national sevens side to a third place finish at the Rugby Europe Grand Prix event in Russia.

In that tournament she played for Scotland for the first time alongside her older sister Bryony.

She then returned home to Edinburgh to quickly pack up her bags and then headed to Montpellier.

Helen had only been in her new home for a matter of days before Sunday’s opening Top 16 match against Stade Francais, but you would not have known it given that she played well at stand-off as they won 41-7 in the Pool 1 meeting.

“It really has been a bit of a whirlwind of late for me, I seem to have been here, there and everywhere, but it has been really exciting,” she said.

“To go to Russia and finish third in an event with some really top quality teams showed how far the Scotland Sevens team has come and we have a bright future.

“That result left me with a real spring in my step and although I only had a few days back in Edinburgh to get all my things together I was ready for the move to France.

“I have been talking to the people at the club for quite some time and everything about the challenge here excites me. I am going out with my comfort zone, the standard of the games will be high and, as a stand-off, I will be running a backline whilst speaking little or no French, but it is all exciting.

“Everyone has made me feel really welcome over here and I think it will help Scotland too when the Autumn Tests come around.”

With these two and exciting full-back Rollie in France and Konkel, Thomson and Bonar in England’s best league along with a handful of other Scots, the future is getting brighter for the female game north of the border.