Gaining a medal will be tough for Great Britain - Phillips 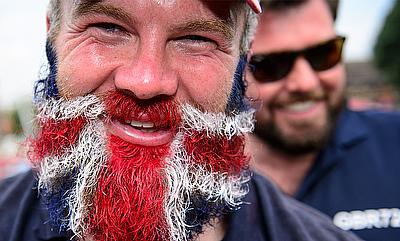 Ollie Phillips hopes Great Britain can gain success in Rio, but admits that will be difficult
©TRU

Brazil, Rio 7s, Team GB
Ollie Phillips has successfully gone from the rugby pitch to the TV studio and now the boardroom. We caught up with him to discuss rugby7s.
Former England captain Ollie Phillips has admitted that it will be tough for Team GB to gain a medal in the upcoming Rio Olympics, but believes the squad is capable of success.

Former England captain Ollie Phillips has admitted that it will be tough for Team GB to gain a medal in the upcoming Rio Olympics, but believes the squad is capable of success.

All four have had sevens experience in the past, but Phillips feels that the other countries have a competitive advantage over Team GB as they have played together all season whereas Great Britain have only been together since the end of May.

“I think it will tough out there for the lads because GB have had to play catch-up on all the other countries,” Phillips told TRU.

“The likes of Fiji, New Zealand and South Africa have all been playing sevens rugby together for a whole season and have been testing combinations and tactics. But for GB, they have had a small amount of time to get that fluidity and get that understanding in the side.

“Of course the squad which Simor Amor has assembled is full of incredible talent and the players have been playing all season for England, Scotland and Wales meaning they will be sharp. They are capable of challenging well in Rio and I desperately hope they claim a medal out there this summer.”

Phillips, who was among the top players in sevens rugby during his playing career, has been casting his expert eye over the sevens circuit this season with his punditry for Sky and now is looking forward to the grand finale in Brazil in just over two weeks’ time.

Rio marks the first time rugby sevens has appeared at the Olympics and Phillips feels that the Games is a great stage for some of the Team GB players to make their mark and he believes it will only help boost the profile of the sport.

“What I really want to see is a great tournament and spectacle,” he added. Nothing rivals the Olympics so it is great for both the men’s and the women’s game that they get this kind of stage to perform on. It is a game changer.

“Many of these players won’t have experience the excitement and euphoria that they are about to in Brazil. Rugby sevens has a real chance to shine this summer.

“There will be pressure for all of the nation’s competing. Some players will thrive and some will crumble, but I am hoping that both Team GB sides can react positively to this opportunity and also that this tournament is a huge success.”

Simon Amor also included Wales Sevens player Sam Cross in his squad, while the ever present Scotland Sevens player Mark Robertson also makes the cut. The rest of the side comes from the England Sevens set-up with Tom Mitchell as captain.

Britain get their Games underway against Kenya on August 9th before they take on Japan and third seeds New Zealand.

As for the Women, England World Cup winner Emily Scarratt will captain the side while Wales winger Jasmine Joyce is the only non-English player in Simon Middleton’s squad.

They come up against third seeds Canada, Japan and hosts Brazil in Pool C of the competition which kicks off on August 6.