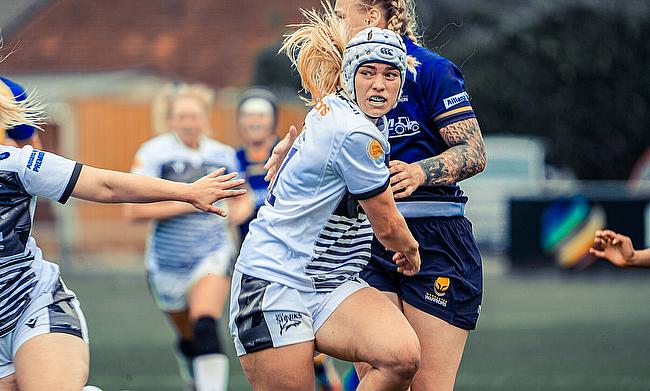 Clubmates Hannah Botterman and Alex Ellis meet on international stage
Poppy Cleall captains Red Roses for the first time as they prepare to face New Zealand
Sarah McKenna on England’s World Cup bid, combining playing with coaching and an important autumn ahead
Poppy Cleall Exclusive: “The people I'm playing with are who I play for”

Meet rugby player Jodie Ounsley, the trailblazer who is profoundly deaf and continues to break down barriers within women's sport both on and off the pitch.

The 20-year-old, who plays for Sale Sharks in the Allianz Premiership 15s, uses her TikTok account to promote deafness and spreads positivity amongst her 60,000 followers. She has built a reputation as one of English rugby’s most exciting prospects, who just happens to be deaf.

Currently sidelined with an injury, I sat down with the talented speedster to talk about her debut for Great Britain 7s, where her love for rugby came from and how competitive the women's game is becoming.

“Playing for Great Britain meant so much to me because before Covid, I was with England Sevens,” Ounsley begins.

“Then Covid hit and the Sevens programme came to an end, but the GB programme was formed. At that time, I was injured and I didn’t make the selection process which was so challenging because it’s something I wanted so badly. To watch the girls at the Olympics, though, was amazing.

“Even though they fell short, they were unbelievable in creating something in such a short space of time. For me to then be invited into the programme was amazing. I was so happy to be there with the girls again”.

After Team GB agonisingly missed out on a medal earlier this year, Ounsley was selected for the side on the world sevens series in September and they went on to be crowned Fast Four champions in Canada.

It was the perfect response to Olympic heartbreak for Great Britain and it was a dream tournament for Ounsley who scored an extraordinary try against Mexico on debut.

Ounsley’s rise to the world stage is made even more inspiring given she was born deaf. When she represents Team GB and Sale, she has to wear a head guard to protect the cochlear implant that she has.

Later on, she explained what it was like growing up deaf and where her positive mindset comes from: “My parents didn’t have any experience within the deaf community and didn’t know anyone who was deaf at the time I was born.

“My Mum and Dad were encouraged to get me fitted with a cochlear implant. When I was 14-months old, I was fitted with it. I only had one fitted because at the time, it wasn’t common to have two. Nowadays though, it’s a lot more common for children to be fitted with two.

“I have been offered to have a second one over the years, but I’ve turned it down just because of my rugby career. I’d have to have another operation and the healing process takes a long time. It’s not like I can just switch it on and hear. I’d have to go through the process again and it takes weeks and weeks before you can switch it on.

“It takes weeks and weeks to be comfortable with it and for it to heal properly. There’s a lot of risks and complications around it so I’ve always said I’ll just have the one until I’ve hung up my rugby boots!”

Despite turning down the opportunity of having another implant fitted, Ounsley has taken it upon herself to learn British sign Language [BSL] in the last few months. It's another challenge she's tackling head on in the hope that it inspires other deat athletes: "My parents were actually advised not to use BSL. There’s lots of opinions surrounding it but the professionals wanted me to focus on my spoken language with it when I was fitted with my implant.

“I went through my whole childhood not knowing sign language but me and my family had our own ways of communicating with one another and I learnt by lipreading. Over the last two years, I have learnt little bits of BSL but I’m really bad. I’m really trying though and I’ve recently signed up to start a level one course so I’m wanting to learn and I am trying. It is just not an overnight thing. It’s like learning a new language - it doesn’t happen overnight”.

And pushing the boundaries and tackling stereotypes around deafness is something which Ounsley admits has helped her grow as a person and has allowed her to express herself on the pitch.

“I was so shy and anxious when I first started playing the game. It’s not happened overnight but my confidence has gradually grown over the years, especially over the last two or three years. It’s a mindset thing. I try to flip situations. It must have worked somehow because I think I cope better than I used to”.

When asked where her love for the game came from, she said she wasn’t one hundred per cent sure as she loved all sports. The physical side of the game was probably what attracted her to it the most: “Growing up, we [Ounsley's family] weren’t really into rugby and didn’t know much about it.

“My Dad played but that was it. I grew up playing jiu-jitsu, athletics and I took part in coal racing! Rugby came into my life when I was around the age of 15. My younger brother started playing and we learnt more about the game through him and then I wanted to learn how to play. I loved how physical it was. Now we’re a massive rugby family. My grandparents love it too and we don’t know what we’d do without it! We’re crazy about it!”

"It was the most amazing, emotional moment. That was the first time she heard sound." ??

A life-changing moment for @_jodieounsley and all of her family

?? Catch up on her episode of #Remarkables in partnership with @HSBC_Sport

The Ounsley clan have been cheering for Sale Sharks Women since the 20-year-old moved to the Allianz Premier 15s outfit last year.

The top division in women’s rugby has continued to go from strength to strength - with sides like Sale and Exeter Chiefs being invited to join the league - and given the ongoing success of the Red Roses as well, Ounsley feels the sport is going through the gears.

“The game is one hundred per cent more competitive,” she adds. “Even compared to last season, it’s changed massively. I’ve been speaking to friends of mine who play in the league for different teams and everyone thinks it’s gone up a notch this season.

“Even the growth of women’s rugby has increased. It’s rising which is so refreshing to see and even if we have got a long way to go compared to the men’s game, I just think what it was like three years ago, it’s drastically improved. I think it’s so exciting the way it’s going. It’s definitely gotten more competitive and just thinking about next season excites me as it’ll go up a notch again. I can’t wait."

The last question that was put to Ounsley was what would she say to those that are deaf and don’t believe they’re capable of achieving in life, as she had similar thoughts growing up: “It’s so sad to think that just because you’re deaf, you can’t do this or you’re not able to do that.

“It’s so daft but I think it’s because I didn’t know anyone who was deaf when I was younger. I didn’t have any deaf role models to look up to so I assumed that I couldn’t achieve anything as no one was like me. It’s so sad to think I was like that but it was all I ever knew.

“That’s why I’m so driven now though because I want to promote what I’m doing as I’m passionate about it. I want to show people they can do anything, You just have to believe you can. I think that’s the biggest thing I learnt, to back myself, trust and believe in myself. So much has come from doing that. All I can say is believe in yourself and the rest will take care of itself.”