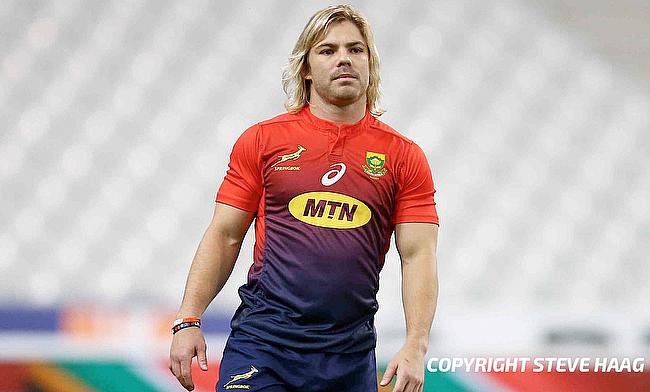 TRU talks to South African international Faf de Klerk about the road to Japan, Sale's Boks contingent and the need to end 2018 on a high.

Faf de Klerk has been on a personal journey this year.

At the beginning of 2018, he was not included in the South Africa set-up by former head coach Allister Coetzee, but de Klerk is now excited about what the New Year will bring for himself and the Springboks.

The scrum-half's impressive performances for Sale earnt him a recall to the international scene and de Klerk certainly delivered for new boss Rassie Erasmus in the summer.

He was superb in the Test series win against England before excelling for the Boks in the Rugby Championship. His performances also saw him nominated for World Rugby Player of the Year.

Winner to be announced at the #WorldRugbyAwards on 25 November pic.twitter.com/VePASy2nwk

In terms of South Africa, they are carrying some optimism into 2019 after an upturn in results under the stewardship of Erasmus and despite only securing victories against France and Scotland during the Autumn, de Klerk is looking forward to a competitive year ahead of the World Cup in Japan.

“We won two out of four so obviously, that’s not want we wanted to do,” de Klerk told TRU. “I think we at least wanted to go three out of four after our summer and Rugby Championship.

“The other teams have really stepped it up, though. Really, there are no more teams where you are going to say you will beat them because it isn’t the way it goes anymore.

“The top eight teams in the world can surprise anyone and as a spectator, it is good to see that challenge. I think all in all, we can take positives from our own tour and it shows South Africa is coming on in their own rugby and we want that to continue.”

Since his recall in June, de Klerk has won six of the 10 matches he has been involved in for his country. His only appearance last month came in the Springboks’ 29-26 victory over France with Sale benefitting from his services in November.

During that period, Sale also made two new signings, but there was a sense of familiarity surrounding the arrivals at the AJ Bell.

Rob and Jean-Luc du Preez were both recruited by Steve Diamond and it only added to the strong Boks contingent already at Sale.

Since moving to the UK last year, Manchester may have started to feel more like home for de Klerk with the likes of Rohan Janse van Rensburg also at the club, as well as South African-born Jono Ross and Bryon McGuigan.

And while he is obviously pleased to be around several players from his native country, de Klerk is more concerned about the positive impact they can have on the team.

“It is always nice to have people from your country to play with you because you can share the same banter,” said de Klerk.

“But they have all brought great value to the team and that is the most important thing. I don’t think it matters where they come from. It’s all about adding value to the team which is great for us and we are playing well together.”

De Klerk and his teammates suffered mixed fortunes during their recent European Challenge Cup fixtures against Bordeaux, but now they will be focused on their final two Gallagher Premiership matches of 2018 as Sale look to move away from relegation trouble.

The Sharks currently sit 11th ahead of their game with Bristol Bears at the AJ Bell this weekend and de Klerk is keen for his side to generate some momentum heading into 2019.

“We did build well after our last set of European games and we got a lot of confidence from that,” added de Klerk.

“Hopefully we can do that again and for any team, just to get wins behind your back, it starts to become a habit. Once that happens, the whole team starts to play with confidence. It is so tight between sixth and the bottom so it is there for any team to take so hopefully, we can pull away from the guys around us in the New Year.”

Faf was speaking at a ‘Cash for Kids’ Mission Christmas event in Sale as the club helped to support the drive to make sure that disadvantaged children in Manchester have presents to open at Christmas.

Anyone wishing to donate gifts to Cash for Kids’ Mission Christmas appeal this year can do so through designated community drop off points, with more than 300 drop offs across the country.