‘This could bring people together again’ - Stransky 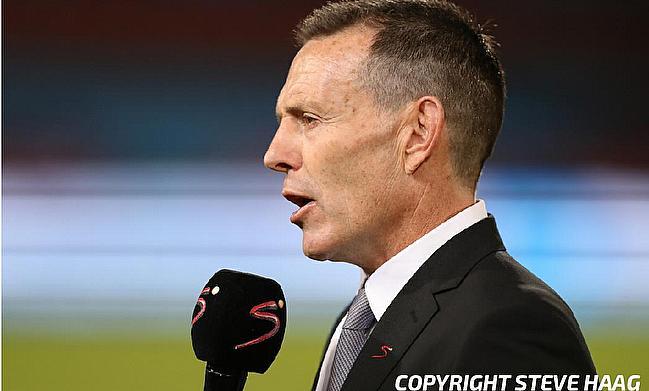 When Joel Stransky kicked the winning drop goal in the 1995 Rugby World Cup final, it signalled the end of amateurism in rugby union.

That day, he and his Springbok colleagues were handed the Webb Ellis trophy by South Africa’s President Nelson Mandela. Wearing the national jersey with the number of captain Francois Pienaar on the back, the image signified the beginning of a new era for the country.

A year later, the football team won the Africa Cup of Nations bringing together a previously divided nation even closer together.

Now 24 years on from their maiden Rugby World Cup victory, Stransky believes the country needs unifying once again through the medium of sport.

“We’re a nation that has issues at the moment,” Stransky said. “We have had a rise in crime, we have political issues, we have load shedding, our infrastructure is collapsing a little bit, we have a little bit of a lack of belief in our government and our structures.

“This (a World Cup win) would be massive for us as a country to bring people together again, to create unity, to give us confidence, to give us hope and to give us a sense of self belief. It would be enormous for our country. To have our first black captain hold up the Webb Ellis would just be enormous for the game and us as a nation.”

When Siya Kolisi was named as captain by Rassie Erasmus many were quick to draw comparisons to the Rainbow Nation environment that was created by the 1995 winning side and Mandela.

Chester Williams a true South African Hero RIP our Friend you will never be forgotten ?????? pic.twitter.com/dalYcPqU1y

The late Chester Williams was a huge part of this. As the only black player in the team, Williams embodied the majority of the nation that would be watching the tournament from home. Not a bad player either, Williams inspired the likes of Bryan Habana to pull on a Bok jersey and make their own World Cup memories.

“Nelson Mandela was the glue and the bond that brought us together and took us through a period of uncertainty,” Stransky said. “We won the Rugby World Cup and we won the Africa Cup of Nations. It was a period where sport played a major role in unifying the nation.

“But, after his handing over of the presidency, we have slowly deteriorated. We had nine years of Jacob Zuma, which was catastrophic for us and now we are trying to rebuild. Whether things have ever been better, or if it has ever been worse, it is immaterial to us right now. What is material, is this can be another foundation on which we can build, we can grow and we can come together.”

Part of World Rugby’s commentary team for the tournament, Stransky has been in Japan for the whole tournament, working alongside Dallen Stanford.

“There’s very little we can criticise about it and hopefully there is a sensational final.”

As ever, all good things must come to an end. It has been nearly six weeks since Japan kicked the tournament off with a win over Russia in Tokyo and the tournament will close with a repeat of the 2007 final between England and South Africa.

It is the first time that either side has got to this stage since France 12 years ago, with many anticipating an epic encounter on Saturday. Whilst Stransky is obviously delighted that his nation has got to the final, he admits that his heart hasn’t been sent racing with the style of rugby played.

“What Rassie Erasmus in the build-up, and through, the tournament has done is built a good culture in the team, good team spirit,” Stransky said. “He’s got a talented bunch of players but he has built a game plan that is designed primarily around statistics, how the laws are and, most importantly, around doing the basics really well. It’s a great recipe, but not a pretty recipe.

“For us, it has certainly worked. We are very big, very strong, very powerful, good in set phases, we are good in the tight loose, but we’re not good in the loose. When the game gets loose, we are not good.

“We kick a lot, I’m not always sure it’s a strong kicking game, but it’s a recipe that works come pressure times, come Rugby World cups and it’s certainly a recipe that has worked for us coming off a low base. So what we do, we do sensationally well, but the reality is we don’t do a whole lot.”

In England, the conversation is much the same. During the Six Nations, there were just two games where Eddie Jones’s side played truly lights out rugby - their opener against Ireland in Dublin and when demolishing France at Twickenham.

Arguably their best performance of the year came last Saturday when up against the All Blacks in their 19-7 win in Yokohama. Stransky believes that England will be tested in a different way against South Africa on Saturday.

“I think what England haven’t come up against yet, during the tournament and the last few months, is a very aggressive, big powerful defensive structure and that is what we’ll offer and where we will attack them,” Stranksy explained.

“It means that England will not get easy front foot ball. I do think that they are good enough to find a way to deliver front foot ball, but they will have to be as good, if not a bit better, than they were against the All Blacks.

“I think England will, not necessarily struggle, but they will find it more difficult to break down the defence and I think they will resort to a little bit more kicking which, to be fair to them, they have that in their armoury.

“They’re a polished team, they’ve got strength, power up front, power in the midfield and they have got great executors and decision makers in the backfield between Farrell, Ford and Youngs. They’re a complete team, offering a strong package, but I’m not sure they’ve been put under huge physical pressure just yet.”

What South Africa never fail to bring is physicality. Midway through this tournament, Erasmus switched his bench to have six forwards and two backs (as opposed to five forwards and six backs). As a result, South Africa have been able to entirely change their tight five, helping the side maintain forward dominance over 80 minutes.

“Wales tested us physically and they hung on, were brave, gallant and almost found a way to win a game they shouldn’t have,” Stransky said.

“Japan tested us for 40 minutes by moving the ball around, but the reality is if we are under pressure and England get ahead, with a six and two bench, I think we might struggle to chase the game.

“What South Africa do really, really well is the physical game. It’s powerful and with those fresh legs, bringing on nearly a whole new pack, it does give you the ability to keep that physical dominance up for the full 80 minutes.

“There is no slacking off when you play the Springboks, you have to absorb that pressure for the full 80 and you’ve got to find a way. I’m not sure that England have been that tested just yet.”