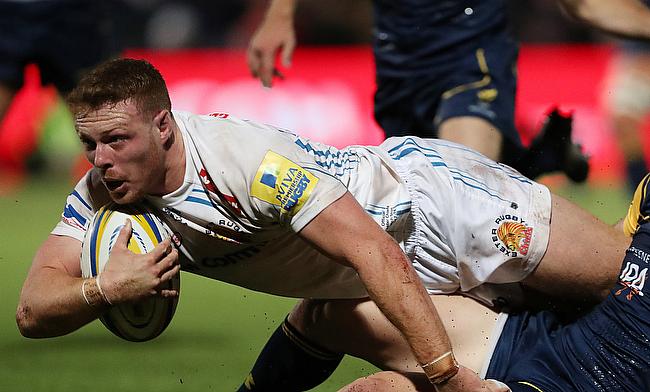 Sam Simmonds scored a double as Exeter Chiefs maintained their winning streak in the ongoing Gallagher Premiership season with a 17-24 win over Newcastle Falcons at Kingston Park on Friday.

This is Exeter's fourth win from as many games as they maintain their position at the top with 19 points while Newcastle Falcons are struck at eighth place with a solitary win from four games.

It took the home side just two minutes to open their account as Zach Kibirige, who replaced Alex Tait just before the start of the game went over the line after a good work from Johnny Williams and Toby Flood kicked the conversion.

The response from the visitors came in the sixth minute when Sam touched down that was improved by Joe Simmonds as the scores were levelled 7-7.

Just over the half-hour mark, Sam went on to score his fifth try of the season that puts him on the top of the try-scorer list this season along with Saracens' Alex Lewington and once again Joe kicked the extras to give Rob Baxter's men a seven point lead that was reduced to four when Flood kicked a penalty goal just before the break.

Joe restored the seven point lead for Exeter with his maiden penalty goal in the 44th minute but the Falcons were resilient as the scores once again came to a 17-17 level when Williams scored a try of his own in the 52nd minute followed by a conversion from Flood.

As the game headed into the final quarter with all three possibilities, Newcastle suffered a setback with Flood sin-binned in the 64th minute and that allowed Matt Kvesic score Exeter's third try a minute later and Gareth Steenson kicked the extras to complete a 17-24 victory.

"Any win the Premiership is a good win. The reality is that they were a top-four side last season and we won away from home so you have to take that," Baxter told BT Sport.

"But we lacked the clinical edge. We made some errors and that kept the pressures going. But I am proud we came through that see-sawing of pressure pretty well".