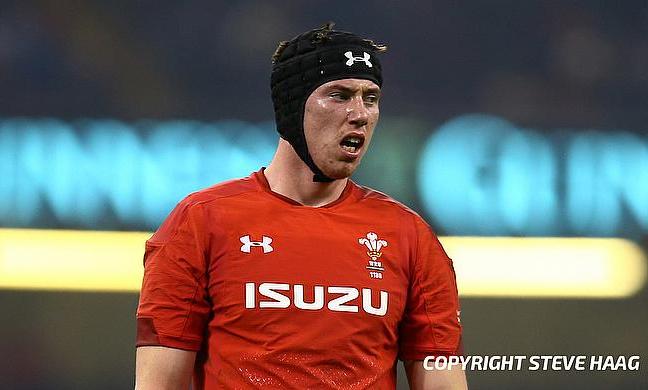 Adam Beard made his debut for Wales in 2017
©Steve Haag

Sat in Heathrow Airport with the rest of his Wales teammates, he fell ill and had to return home to have keyhole surgery to remove an inflamed appendix.

Just 12 days later, Beard was reunited with Warren Gatland's squad in Japan. Starting a pool game against Uruguay, the then 23-year-old went on to appear in the knockout stages as well as the bronze final against New Zealand.

Playing alongside seven of his Ospreys teammates at the World Cup, they were having to watch from afar as their region capitulated. They didn't win a game in any competition in the first half of the season and their maiden victory did not arrive until February against Ulster, with Beard back in the side.

It was a truly agonising run of form for their fans. Beard felt it too, having regularly made the journey to north-east Swansea to watch on as a youngster with his father. With a new coaching staff, the 24-year-old is hoping that the future is bright for the region with players now walking into an entirely fresh environment.

“It has been great for us. In sport, it is always nice to have a change,” Beard said. “We have had a change in our coaching staff. We used to train at Llandarcy, now we are in St. Helens, the home of The Whites, so it is nice to have that change. A change of scenery, a change of coaching staff, a new look at rugby.

“We wanted to put an end to last season because we know that was unacceptable and we are obviously disappointed in the way that went, but we have got to look at that as the past, move on from that and hopefully we will start next season a lot better than we did last year.”

??@Adambeard7 has signed a new two-year deal with the Ospreys ????

During lockdown, Toby Booth arrived in South Wales to take on the head coaching role. Booth, his coaching staff and all the players knew that nothing they did on their return to play would change the fact that they would not be in the Champions Cup, as they were for the 2019/20 campaign.

Now the Ospreys squad are preparing for the 2020/21 season whenever that may begin, working hard to right the wrongs of the previous year.  Encourgingly for the side, there were clear improvements when they returned to action last month against fellow Welsh clubs Dragons and then Cardiff Blues.

Whilst the latter ended in defeat, Ospreys dug deep to draw 20-20 with the Dragons after playing 65 minutes of that game with 14-men following a red card to George North.

“We kind of looked at it like two pre-season games really,” Beard said. “We had a good block of seven, eight weeks training going into those games and ideally we would've like to have won. We knew it was still part of last season and it weren’t the be all and end all, we just wanted to see if we could put what we did in training onto the pitch. I definitely think, looking at the Dragons game, we started the game very well and we were definitely seeing signs of what we had done in training put into that game.

“It was unfortunate that we had the card and went down to 14 men, but the team showed real character just to stick in the game and get a draw. Then, when we look to the Blues, we were all disappointed in that game. We felt we pulled our foot off the pedal really and didn’t get the performance we wanted to, but that is last season now. We’ve swept that under the carpet and we've been training hard for the next few weeks and then we will rip into this season coming up.”

Beard also has international selection in mind. Having been a regular under Warren Gatland, chances under Wayne Pivac were something to be desired. In the four rounds of the Six Nations that Wales played prior to lockdown, the lock was only involved in the game against Ireland in Dublin.

With the Six Nations to be concluded next month before the Autumn Nations Cup in November, there are four Tests for Wales before the New Year. Beard is more than aware that there could be opportunities coming up for him and knows he must impress his new international selectors to carry on pulling on a red jersey.

“Since the new coaching staff have come in, I probably haven’t had as much game time or selections as I would have wanted to,” Beard said. “It is new coaches, a new look at things and I have just got new people to impress really and stuff to work on in my game. That’s only for me to work on and change the minds of those coaches really.

“Looking around my set piece, that is a positive around my game and I think it is something that is a point of difference for myself, but maybe I need to do a bit more around the park. That will help along the way and I suppose that will get me more selections then.”

Wales will be unable to win the Six Nations when they play Scotland at the end of October, but the Autumn Nations increases the chances of a title for Pivac's side. Playing Georgia and England in that competition before the play-offs, it is set to be an exciting end to the year with Georgia and Fiji also taking part.

Playing international rugby is of course Beard’s end goal. Having had a taste of the game at the very highest level and less than a year from a British and Irish Lions tour, the second-row is walking before he runs. In this case that is playing for the Ospreys.

“I suppose it is in the back of your mind, playing international rugby, but first and foremost, I want to get my job right playing for the Ospreys,” Beard said. “I’m sure if I do that, I have a good chance of being in the squad.

“If you look at last season, it was tough and when you keep on losing it is not going to be a happy place. We give full credit to the boys from last year. We stuck together, there was definitely effort there and you can’t fault our effort. Even though we weren’t getting the results, we still stuck together. We still tried our hardest. It just seemed like we were in a hole and we weren’t getting out of it.

“Whatever the circumstances, whether we win, lose, whatever the situation, we are always sticking together. That’s the Ospreys DNA.”