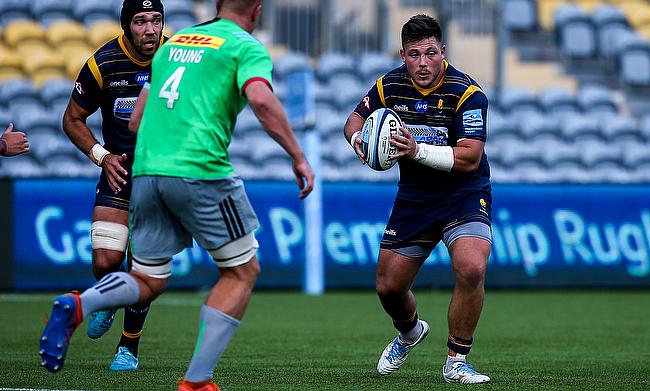 Exclusive: Charlie Beckett on being back in the Premiership
One player test positive for Covid-19 in the latest round of Premiership testing
Worcester register first Premiership win in 2020 after beating Harlequins 29-14
Highlights: Gallagher Premiership Round 15

It wasn’t too long after Ethan Waller’s arrival at Worcester that Alan Solomons joined the side too.

The loosehead prop was in the search of a regular starting place with a Premiership club having been behind the likes of Alex Corbisiero, Soane Tonga’uiha and his brother, Alex, at Northampton Saints.

It is a certainly a move that has paid off for the 28-year-old, who can now count himself as one of the senior players at Sixways.

With the club unlikely to achieve a top eight finish this season, Solomons has been able to introduce young players to his first XV. In his own position, Waller has watched on as Lewis Holsey has been given his chance in the front-row whilst James Scott, Noah Heward and Gareth Simpson have also all impressed.

“I am chuffed for lads getting their chances, especially the boys that have been getting to start like Gaz Simpson, Alex Hearle, the likes of those boys. Obviously, Holsey coming in, getting his first taste of Premiership action as well, so I am really chuffed for those boys.

“They are really good lads, the boys graft extremely hard so to see them get that reward and actually get onto the pitch is awesome.”

As part of the restart, the Rugby Players Association, Premiership Rugby and England Rugby came to an agreement in regards to how much time players can spend on the field with so many games close together. These regulations are as follows:

Waller was heavily involved in the creation of these protocols as the RPA's representative at Worcester.

“The reality of it is, we don’t have massive, massive squads in rugby like in football per se and it is a much more physical game,” Waller said. “So, restrictions like that had to be put in place to protect the lads. They were hotly debated for quite some time and I think it is probably the best outcome that we could get between the two parties.

“Negotiations are always going to leave both sides slightly uncomfortable in some way, so that was probably the best we could get out of it. Luckily, I think the majority of squads in the Premiership are being really intelligent about it. I don’t think anyone wants to lose a player to injury or push someone to their absolute limits."

Not involved last weekend as Worcester fell heavily to Exeter Chiefs at Sandy Park, Waller has been named in the starting XV as the club prepare to take on Bristol Bears on Friday evening. Pat Lam's side have the likes of John Afoa and Kyle Sinckler for him to scrummage against, which will provide a stern test for the 28-year-old.

“John has been around a fair bit, so he knows how to play the game for sure and he is a very good ball player, but also a solid scrummager,” Waller said. “I had a look at him, they have got Kyle Sinckler as well, who is another massively talented player. For me, that is a personal battle, that is me looking at those two from a scrum perspective and hopefully we can be around the park and we can have a bit of fun as well.”