Exclusive: Charlie Beckett on being back in the Premiership 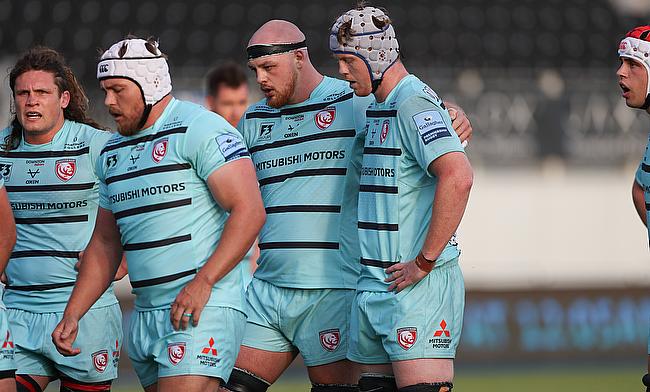 After two years with Jersey in the Championship, Charlie Beckett has returned to Gloucester.

It was this time a year ago that Beckett became a TRU columnist, first putting pen to paper to discuss Jersey’s trip to Russia where they beat the World Cup bound nation but as the 2019/20 season still rumbles on, the second-row finds himself back in the Premiership.

Gloucester was the lock forward's last top-flight side and the 24-year-old has returned on a short term deal that means he will see out the rest of the season at Kingsholm. Arriving at the same time as the new coaching staff, Beckett knew he had to show exactly what they wanted to secure that contract after an initial two week trial period.

“I came in and, obviously, you have got to push the point in a trial because you have got to be asking for feedback all of the time because you want to know how to impress," Beckett said. "I went to him (George Skivington) on the first day, introduced myself and said ‘I will give you everything that I have got these two weeks. If there is anything you see that you don’t like or you do like and want to see more of, just tell me straight away’.

“I only had 10 sessions to impress in. I needed to know what I was doing well, what he (Skivington) needed to see more of. Then, the games now are mad, they are so thick and fast that we are rotating and everyone is having to play. It is less knocking on the door, asking what I need to be doing to get into the team, because, actually, I will get my chance. Skivs has been very honest with me, because I will get my chance because of rotating.”

After that two week trial, Beckett was signed. Seven days after his return was announced, he lined up for a Premiership debut that was eight years in the making. In an interview with TRU in January 2019, he discussed not forcing the point of getting into the first team, leading to his 24-month spell in Jersey.

Hugely disappointed with the result last night but on a personal note it was an incredibly special moment for me to make my Premiership debut and to have the opportunity to be playing for @officialgloucesterrugby again ??

Moving to Leicester as a 16-year-old to join the club’s academy, Beckett’s rugby was regularly played in the A-League and on dual registration with London Welsh and Leicester Lions. Also representing England U20s in this time, his long awaited top-flight bow was one much welcomed by the player and those around him.

“From a purely personal point of view, it was really quite an emotional day for me,” Beckett said. “I first walked into a Premiership club eight years ago. Six years ago, I had my first senior year with a team, but for four seasons, I was a senior member of a Premiership club without playing in the Premiership. I went away to Jersey, did two seasons, was playing well, was speaking to Premiership clubs and then Covid hit.

“It all went silent and the clubs I was speaking to couldn’t commit to anything and I was exploring options abroad. It just seemed like it wasn’t going to happen and I had probably come to peace with the fact that I wasn’t ever going to play in the Premiership, which was very much a chip on my shoulder that I really felt that I could have. I should have and I had missed my chance with that.

“To do that last Wednesday was a very emotional night for me and I think for my family as well. They know how much I wanted to do that, how much it means to me. They have put so much into it, my Mum, Dad, both my sisters, grandparents. Everyone has put so much into my career; it was an emotional night for all of us. I will always be very proud now, whatever happens. The rest of my life I can say I played in the Premiership, but I very much want it to be the first of many.”

In February, when it was announced that the RFU would be significantly reducing their funding to the Championship, Beckett wrote down his thoughts on the matter. On his debut against Saracens, he lined up on a field stacked with players who had begun the season in the second division.

Alongside Beckett, Logovi’i Mulipola and Jordy Reid had been contracted to Championship sides this time 12 months ago. In the Saracens starting XV, Alec Clarey was a teammate of Beckett’s on the Channel Island, whilst former Bedford man, Will Hooley, wore the 15 jersey for the English champions.

“I put all my thoughts in the column that I wrote for Talking Rugby Union at the time,” Beckett said. “The argument that the Championship isn’t a breeding ground for the Premiership and then international players is nonsense to be honest with you.

“All you have to look at is the stats of how many of the England World Cup squad in 2019 had stints in the Championship that were paramount to their rugby development. I just think that to say the Championship isn’t a breeding ground and doesn’t produce Premiership and international players, I just don’t think that is the truth.”

Having made one appearance so far during the Premiership restart, Beckett is looking to win more caps for Gloucester. Not involved at the weekend for the 46-30 win over Leicester Tigers, there of course is a possibility that the lock could be included on Saturday against London Irish.

It is an intriguing fixture, with eighth-placed Gloucester hoping to pull away from the Londoners who are holding down ninth. With Champions Cup qualification extended to the top eight, the club can all but secure their place in Europe’s top tier competition and Beckett is keen to make as much of an impact as possible.

“I would play 80 minutes in all of them (the remaining league fixtures) if I could,” Beckett said. “Whether the body would let me or if the RFU would let me, that is what I would do. Unfortunately, that is not going to happen. I am working as hard as I can in training to impress Skivs, to impress Dom (Waldouck), Kingy (Alex King) and all the coaches.

“Hopefully they want to give me another go and hopefully I get on the pitch, impress and play well. I just want to get that chance to wear Cherry and White again and just really enjoy it. I was very aware that I needed to enjoy last Wednesday night, because I had worked hard to get there. I have waited eight years to get that so I had to make sure I enjoyed it.

“I had worked too hard and waited too long not to enjoy it. As much as I enjoyed it, it just made me want more, so I am very ambitious to play in these next few games. Whether I do or not isn’t my decision, it is the coaches, but I am doing everything I can in training to hopefully impress and get in the team and hopefully be part of a successful, winning Gloucester team.”