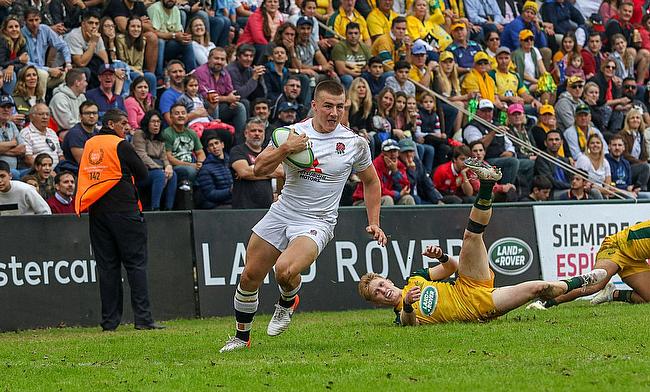 England U20 miss out on semi-final despite 24-23 win over Italy
England U20's Alfie Barbeary suspended for five weeks
Ireland stun England in opening round of World Rugby U20 Championship
England U20s boss Bates: Players will want to 'dish out payback' against Ireland

England U20 ran an eight-try riot as they defeated a 14-men Australia 56-33 in their World Rugby U20 Championship encounter at Club De Rugby Ateneo Inmaculada on Wednesday.

Despite the win England missed out on the semi-finals as they managed just nine points and will face Ireland in the battle for the fifth place while Australia will take on Argentina in the knock-out to keep their hope of clinching the cup alive.

Australia started the game with a huge setback with Patrick Tafa sent off for a high tackle on Aaron Hinkley leaving the Junior Wallabies down to 14-men for the remainder of the game.

England made full use of the numerical advantage as skipper Fraser Dingwall crashed from close range for the opening try and by the ninth minute, Ollie Sleightholme followed the suit as England doubled their tally.

England further extended their momentum with Manu Vunipola crossing over early in the second half followed by a Tom Willis' (63') try that took them past the 50-point mark. Even though, Australia showed great character with second half tries from William Harris (54'), Fraser McReight (71') and Carlo Tizzano (78'), the damage caused by red card of Tafa costed them dearly as they lost the game with a 23 point margin.

England captain Fraser Dingwall: “Realistically we’re pretty disappointed with our first two games and hopefully from this outing we’ve shown that we can actually play a lot better. This team needed confidence and we’ve shown today that we can attack with some intent.”

Australia captain Fraser McReight said: “It’s a bitter-sweet feeling making the semis before this game and getting a red card two minutes into it. It wasn’t the start we wanted and we wanted that scalp.”