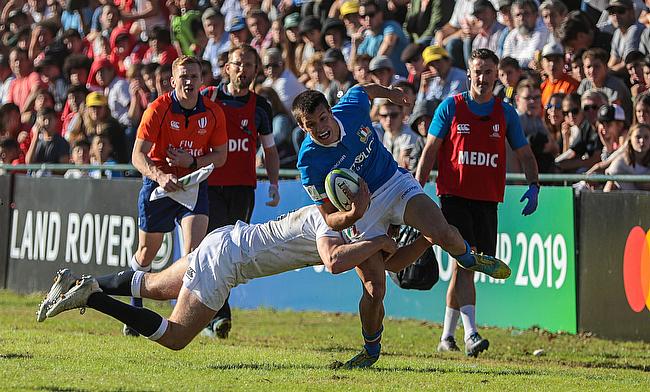 Josh Hodge scored the decisive penalty kick in the closing stage as England edged out Italy 24-23 in the second round of the World Rugby U20 Championship at Club De Rugby Ateneo Inmaculada.

Despite the win, England have missed their chance in the semi-final as they managed just four points from two games and are positioned second in the Pool B while Italy are at the bottom of the table.

Italy went ahead early in the game with Giacomo Da Re kicking a penalty goal. England then had their moments and even dominated the possession but could not translate that to points until the 29th minute when Alex Coles touched down and Hodge followed with the conversion.

Just as the half-time was approaching Da Re kicked another penalty goal in the 38th minute to ensure the teams finished the first half with a 7-6 scoreline.

Italy had better start to the second half with back to back tries from Christian Lai (44') and Ange Capuozza (49') to stretch Italy's lead to nine points but a sin-bin to Nicolae Cristian Stoian halted their momentum. England responded quickly with a try from Luke James in the 56th minute but his efforts were cancelled out when Paolo Garbisi crossed the whitewash at the end of the third quarter.

As the final quarter kick-started, Italy looked comfortable with a 14-23 lead but Tom Willis set up Richard Capstick over the line in the 64th minute followed by a Hodge conversion to bring the gap down to two points before the England fullback also kicked a penalty goal in the 74th minute to complete a thrilling one point win.

England captain Fraser Dingwall: “We knew this Italy side would turn up and they would give us a big test, but yeah the boys are really happy. I think now we can relax into this tournament. We’re all gearing up to put some pressure on Australia.”

Italy captain Davide Ruggeri: “I’ m proud with my guys this whole game. Congratulations to this English team. It’s going to be a hard game [against Ireland] but we are here for work, let’s see.”

France make one change for clash against Italy