Ireland stun England in opening round of World Rugby U20 Championship 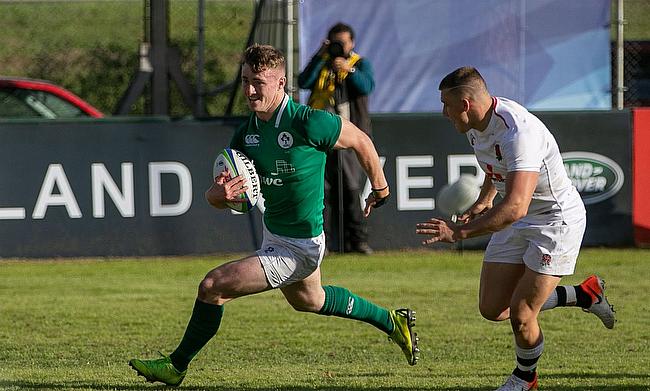 England U20s boss Bates: Players will want to 'dish out payback' against Ireland

David McCann scored a hat-trick while Ben Healy contributed with 13 points as Ireland went on to beat England 26-42 in the opening round of the World Rugby U20 Championship at Club De Rugby Ateneo Inmaculada.

England had a terrific start with Manu Vunipola kicking a penalty goal in the third minute to begin the proceedings and Ollie Sleightholme dotted down in the ninth minute for the opening try of the game. The fly-half also kicked the conversion to make the scoreline 10-0.

Ireland's response came in the 12th minute when fly-half Jake Flannery spotted a gap in England's defence for a converted try but by the 25th minute, they suffered a setback with an injury to Azur Allison.

Vunipola with his second penalty kick provided England with a breathing space but Ireland took the lead for the first time in the game after some smart thinking from Stewart Moore around the half-hour mark.

Just as the teams were heading into the break, England were reduced to 14-men temporarily with Aaron Hinkley sin-binned for a high tackle on Angus Kernohan and despite the setback England were the first to score in the second half with a penalty from Vunipola followed by a touchdown from Sleightholme - his second in the game to take the score line 21-14.

McCann's double in the 51st and 61st minutes separated by a 53rd minute try from Tom Seabrook meant Ireland had a slender 26-28 lead heading into the final 15 minutes and that's where they seized the moment with England losing Alfie Barbeary to red card following which Ben Healy and John Hodnett scored tries to complete a 26-42 win for Ireland.

Elsewhere in Pool B, Australia began their World U20 Championship with a 36-12 victory over Italy in Santa Fe.

The Young Wallabies scored tries through Will Harris and Lachlan Lonergan, with Will Harrison kicking seven points to give Australia a 17-0 lead.

Triston Reilly, Lonergan and Noah Lolesio dotted down after the break, but Italy showed some fight in the final five minutes as Niccolo Taddia and Jacopo Trulla crossed.

However, the damage had already been done and Australia clinched the victory which seems them top the pool ahead of their clash with Ireland on Saturday.

U20s Highlights: @IrishRugby get their #WorldRugbyU20s Championship started with a win after epic encounter with England pic.twitter.com/hjl0QsqNWt