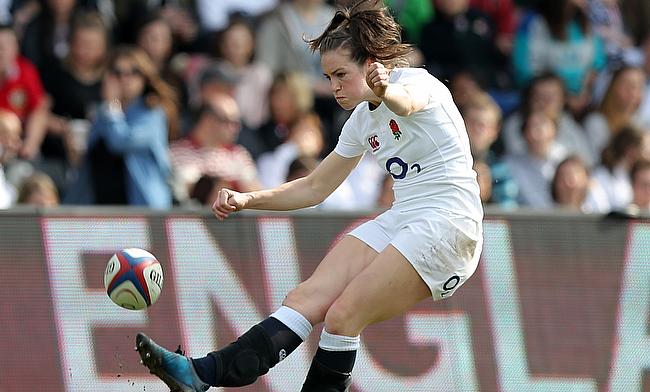 England Women's centre Emily Scarratt has credited Paul Burke for the boost in her goal-kicking ability.

Former Ireland fly-half Burke has been assigned the role of kicking coach of the England Women's team as they bid to defend the World Cup title that they won for the first time in 20 years in 2014.

Scarratt revealed that the 44-year-old has been instrumental in helping her gain the confidence just after receiving a handful of sessions.

"We have had Paul Burke in to help with our goal-kicking specifically - it is something we have worked really hard on," said Scarratt.

"We appreciate a lot of games in the World Cup are going to come down to three points because that is how close they are going to be.

"He has just tweaked a few things. I have never really been coached in goal-kicking prior to him coming in so there are a few basics.

"They are really simple things like making sure you line up the ball right.

"Apparently I was lining the ball up outside the right post, so how is it ever going to go through?

"In my head I was lining it up but obviously I wasn't. He has kicked for Quins and what have you for years and years so obviously he knows what he is talking about.

"It has been simple things but it's almost just giving you the confidence to kick the ball, so you know that it's lined up and it works, so when you get to the ball you just whack it.

"I don't like to over-think things. I just get to the ball and whack it and know the process is there. When you have kicked it you look up and hope it has gone where you want it to go.

"If you have got a good bank of kicking behind you it gives you the confidence to go out and kick it."

England are currently on the top of rankings that they achieved following the win over New Zealand in Rotorua in June but the 27-year-old believes her team will have their task cut out in the showpiece event that begins next week.

"We take a huge amount of confidence from the result that we beat New Zealand but we are not naive," said Scarratt.

"They are going to have worked on an awful lot because they won't want that result to happen again so we have to keep moving forward.

"Other nations would have seen that and looked at areas they think they can expose in our game - we are really conscious we can't stand still. We know winning in New Zealand won't win us a World Cup."