Eddie Jones: "Our job is to put smiles on people’s faces" 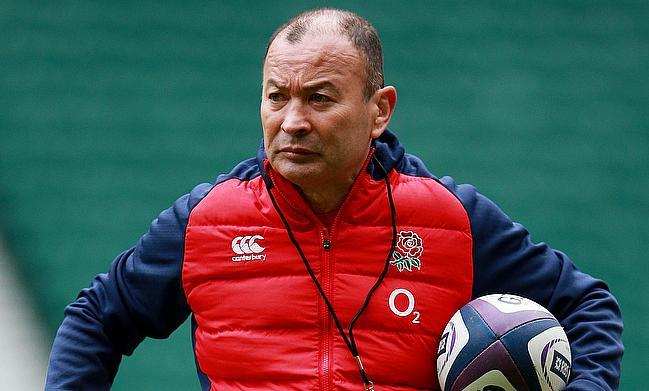 How do you make sense of the last 12 months in English rugby?

Just over a year ago, the national side had secured a third successive victory at the World Cup and England’s adventure continued all the way to the final, where they came up short against South Africa.

Their exploits in Japan had undeniably created a buzz around the game back home, but the headlines on the domestic front - combined with a global pandemic - halted any positivity that had been generated by Eddie Jones’ side on the international stage.

Saracens’ salary cap saga came to light just days after the World Cup final in Yokohama before the coronavirus crisis froze the entire sport in England for almost six months.

Some normality returned to the English rugby landscape in August when the Gallagher Premiership restarted, but whilst the top-flight season is still ongoing, the game has suffered financially because of Covid-19.

With no fans allowed to attend Twickenham this autumn, the sport at all levels is facing an uncertain future, but for now, the show goes on with the Premiership final just around the corner before England return to action at the end of October.

“Our job is to put smiles on people’s faces and that is what we are going to try and do,” said Eddie Jones on Tuesday.

“We should be gracious for this opportunity. I am sitting here with a big smile on my face because I am so excited to coach England again and I expect the players to come in with a smile on their face too.

“They have also got to understand how grateful they should be for this opportunity to play for England and play sport at the top level when the world is in a difficult situation. Our responsibility is to put a smile on people’s faces. I know how people smile in England when the side wins!”

England haven’t tasted that victorious feeling for exactly seven months, when they defeated Wales 33-30 in the Six Nations at Twickenham.

214 days have passed since then, but Jones’ charges are still in pole position to clinch the Championship when they face Italy on October 31st.

On Monday, the England boss named 28 players to take part in a three-day training camp as preparations begin for a busy international window, but his selections did not include any players who are set to be involved in domestic competition this week.

Jones will await the outcome of the Premiership play-offs before revisiting his squad list on October 19th, but his initial plans have been disrupted by the positive Covid-19 cases at Sale Sharks which has also thrown the top-flight into disarray.

In football, Tammy Abraham, Ben Chilwell and Jadon Sancho will not feature for Gareth Southgate’s side in their fixture against Wales on Thursday after breaking coronavirus rules in England and Jones hopes his group of players can take responsibility for their actions going forward.

“I really don’t know what has happened at Sale,” he added. “All I try to do is select the players that are available. That is all I have been worried about. I just saw in the football that they had three players unavailable who can’t go into Gareth’s camp.

“The main thing for us is that we understand the responsibility we have got. We are the England national rugby team. We have been given the opportunity to play rugby in quite a difficult situation.

“I anticipate that every player coming in will be committed to that, but like with every other young man around the world at the moment, sometimes you make mistakes. We want to minimise those discipline issues. We will certainly be striving to be a very disciplined team and there is going to be a constant drive to be as good as we can be in that area.”

Before England conclude their Six Nations campaign and look ahead to the Autumn Nations Cup, they face the Barbarians at Twickenham on October 25th.

At the start of this week, Jones included 12 uncapped players in his training camp and many of his new faces will be hoping to catch the eye with a busy international schedule now on the horizon, but the England boss admitted he will pick his strongest side in both of the upcoming competitions.

Eddie has named 28 players to be part of a three day training camp this week ??

“I think I have been very consistent in selection over the last four years and I don’t anticipate there is going to be many changes,” Jones added.

“We will be picking the best 23 every game, but does that involve some of the young guys coming through? It possibly could, but we will pick the best 23 for every game. Are there other players in the mix? Yes, but they are involved in other competitions for their club so I can’t select them.

“Our number one priority is to win. Our number two priority, as it always is, is to keep developing the squad and make it stronger and that will be part of the process.”

Jones also insisted on how important the element of togetherness will be in his squad as they prepare for the challenge of playing a series of internationals behind closed doors.

Off the pitch, the England head coach revealed his players have been provided with a ‘state-of-the-art games lounge’ at their base at The Lensbury Hotel and after an unprecedented period for the sport, Jones hopes his squad can come together, on the pitch, to provide some joy for English rugby.

“The one thing that has been consistent in all sports without crowds is the teams that have the most togetherness and team spirit, are the ones that play with toughness, Jones said.”

“Togetherness is about the players driving it, the senior players, particularly. We’ve tried to make the environment as friendly as we can but it’s a balance between hard work and enjoyment. The task is always to get that right. The staff have done a fantastic job setting up the Lensbury. I think we’re well-equipped to handle what’s ahead of us."