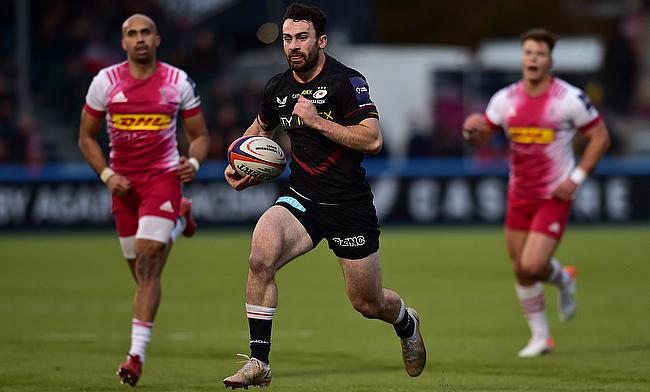 Representing Saracens is clearly in the blood of the Morris family.

With siblings Vincent and Oli - who is now at Worcester Warriors - both experiencing the academy, it is middle brother Dom who is currently making inroads at the club he supported as a boy.

Having grown up in Essex, the home venues of Vicarage Road and Copthall Stadium were just a stone’s throw away and the perfect place for a young Saracens fan to watch one of English rugby’s greatest dynasties grow.

Making his Sarries debut against Scarlets in the 2017 edition of the Anglo-Welsh Cup, the now 24-year-old graduated from the club’s youth system alongside England international Max Malins, but his senior career has largely been plagued by injury.

Long spells in the treatment room have meant Morris has been unable to become a regular starter at the StoneX Stadium, with Nick Tompkins and Alex Lozowski currently Mark McCall’s go-to in the midfield.

Looking forward to getting back out there ???? https://t.co/dTOkJ8eFWd

However, with the Autumn Nations Series in flow in recent weeks, Morris has been given starts in consecutive matches, scoring a try in Sarries’ 28-21 win over Harlequins before he played the full 80 minutes in the 29-20 loss against London Irish last Friday night.

“It’s definitely a big season for me,” Morris told TRU. “With these opportunities, I do my best to show what I can do to try and cement myself as a proper starting player, to make sure that the coaches believe in me, and I can take the team forward and be involved in it as much as I can.

“It’s a big year for me and I am looking forward to when I get my opportunities and taking them and making sure I put my best foot forward.”

Last season in the Championship was when Morris perhaps put together his most consistent run of fixtures. With Lozowski and Tompkins loaned out elsewhere, there were plenty of opportunities for the 24-year-old as he played eight games in the truncated campaign.

He clearly made an impression on his coaching staff, who have utilised him for seven of their eight Premiership matches so far this term.

“It (playing in the Championship) was good for me to get some exposure, playing with some experienced players around me and just getting that regular game time was massive,” Morris said.

“I feel like it has definitely helped my career in the long-term so I can push on here at Sarries. Being able to play week in, week out, the Championship is a good level so it was a good standard to be playing.”

Dealing with long spells on the touchline is something that Morris has certainly had to become accustomed to. Now fit and firing, he is well and truly primed to push on.

Owen Farrell needs ankle surgery and will be missing for 10-12 weeks. Jamie George’s knee will keep him out for 8-10 weeks. The Six Nations starts in 11 weeks.

Recent injuries to Owen Farrell and Duncan Taylor, in particular, will give Morris more opportunities to become a force in the midfield. However, with his track record of setbacks, you are left wondering what the 24-year-old has been doing differently in order to be the master of his own body.

“My first four years, I think I had quite a significant injury every year, so it kind of plays on your mind sometimes,” Morris said. “It’s like ‘will this ever happen for me?’ and I think over the last couple of years, I have taken the approach to take a lot better care of my body.

“This started with things like Pilates, which has helped get my body into the shape that it needs to be so I can really play week in, week out because rugby is obviously a physical sport and if you are not doing things outside the gym and the training field, then it is hard to be able to compete at that level and to stay injury-free.

“I think it is a massive thing to be able to have the recovery options outside (of rugby) especially if you are someone like myself who is injury prone.”

Professional athletes doing Pilates and yoga is not a new thing. Footballers Ryan Giggs and Brad Friedel credited their long careers to this form of exercise, and Morris may be the latest sportsperson to take up this activity, after a little convincing from his instructor/neighbour.

Piquing the interest, it didn’t take long to ask whether Morris praticed any mental approaches to the game.

Experiencing such extended periods without being on the field, it seems only natural that the former England U20 international would have to keep his mind away from the darker thoughts of spending days doing rehabilitation whilst his teammates were out on the pitch.

“I have dipped in and out of meditation quite a bit because professional sport is massively about the mental side of the game,” Morris said. “I think if you are mentally off, that is when you can get yourself in trouble in sport.

“So, I have definitely dived into meditation and I have found that massively beneficial as well to get you present in the moment, rather than thinking of other things.

“It is just massive for bringing yourself back and realising what life is all about really, like enjoying it and not worrying about things you can’t control and make sure that you are just doing it, instead of thinking about all the things that could go wrong or the things that might go wrong.

“It is more about being in the present and being able to perform and be your best in and outside of rugby.”

As a collective, the recent form for Saracens can only be described as inconsistent - a word not usually associated with a colossus of the English club game.

A draw at the death with London Irish in the last round of Premiership action preceded mixed fortunes in the Premiership Rugby Cup, and the visit of Sale Sharks on Sunday will by no means be easy.

After their expulsion from the English top-flight, Sarries currently sit second in the Premiership, following a strong start to the season.

Some 10 points behind Leicester Tigers and level with Harlequins, a victory over eighth-placed Sale would keep the club heading in the right direction as they aim to bring the glory days back to North London.

Before the Premiership’s return in September, Nick Tompkins told TRU that Saracens’ want to win everything’. Now several games into this current campaign, and with the Challenge Cup also on the horizon, Morris re-emphasises his colleagues’ sentiments.

“We are massively positive about everything we are in, and we have got a special eye on the Premiership,” he said. “I think that is something we definitely want to get after and do as well as we can.

“But, on the whole, we just want to take each game as it comes and do our best and ideally win whatever game comes our way and get the best out of every opportunity.”