Alex Lewington Exclusive: "It’s more about driving our own standards" 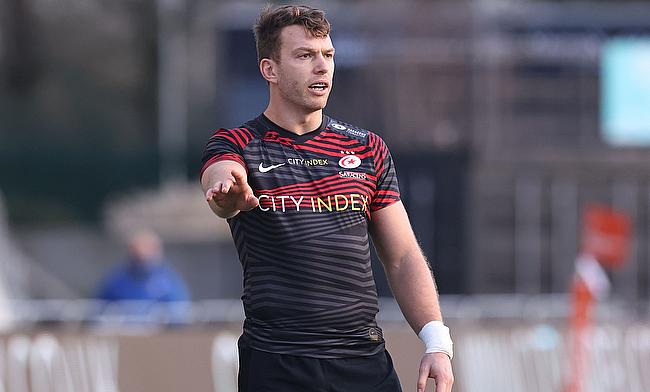 Mark Bright Exclusive: “I’ve just been finding it hard because it’s been 12 months since I played any rugby”
Louis Grimoldby Exclusive: “The generosity of our community means we can take our place in the Championship"
Alex Lewington commits to Saracens at least until 2022
Looseheadz x TRU Podcast - Alex Lewington

‘These are unprecedented times we are living in.’

Of course, this buzz phrase has been repeated throughout the last 12 months and those words are also true of rugby at present.

You could even argue Saracens’ current plight certainly fits the bill, perhaps more than most.

The series of events leading to where the club now finds itself – in the Championship – are well documented. The rebuilding and readjusting phase since, less so, because it is all part and parcel of the fall from grace.

The club did hit the headlines following the cancellation of October’s England v Barbarians match, though, as 13 Baa-Baas players - eight of those Saracens - breached Covid-19 protocols.

An independent disciplinary panel has published its judgement on the 13 Barbarian FC players charged by the RFU following breaches of the Covid Code of Conduct.

Make no mistake, Sarries were suitably punished for their salary cap breaches and were relegated from the Premiership last season, a competition which they’ve dominated in recent times, but a new chapter in their history is about to begin.

A club that has won four of the last six Premiership titles and a squad that contains British and Irish Lions are now gearing up for a foray into the second tier in 2021.

There are positives for the men in black, though. A swathe of re-signings, complemented by some shrewd additions, means Mark McCall’s men are still very well equipped and are looking forward to the challenge ahead.

One of those who jumped at the chance to extend his stay was Alex Lewington. Having joined the club from London Irish in 2018, the winger penned fresh terms to remain at Saracens until at least 2022.

No stranger to the Championship, Lewington made a name for himself with Nottingham whilst on loan from Leicester Tigers early in his career. He later helped Irish win promotion back to the Premiership in 2016/17 and he even scored a brace in the second leg of their play-off final.

It’s been a rollercoaster period for Lewington and Saracens. Choosing to sign up for more was the easy part, now comes the renaissance.

“It’s been a very strange time, to be honest,” Lewington said. “The first lockdown brought its own challenges of all of us being at home. I was out of contract, all recruitment was put on hold, so that was stressful.

“Once we got to the point where Sarries offered me something and I wanted to stay, it was an easy decision. I like living in London and I’ve really enjoyed being at Sarries, particularly my second year, so I wanted to carry on that momentum. Although we are where we are, hopefully I’ll be around long enough to enjoy the benefits if we go back up.

“The Barbarians thing was a nightmare. It was a four-week ban that stretched over four months, so it’s been quite substantial, then we’ve been waiting for the league to be announced.

“It’s all very positive now, though and with the confirmed start date, that has brought massive energy to the group.”

That energy will be crucial for a side that had it sapped from them back in October. Sarries came within five minutes of beating Racing 92 in the Champions Cup but ultimately missed out on the chance of a fairytale finale for their departing stars. The last dance ended at the semi-final stage, just a week after one of their greatest triumphs away at Leinster.

It won’t be revered as fondly as their trio of victorious European campaigns, but given the circumstances, it can still be considered a memorable one. Lewington himself came within inches of settling the tussle in Paris, but the bounce of the ball prevented him from gathering a hack through.

Last season’s ending, followed by this extended period on the sidelines due to the pandemic, has only furthered Saracens’ determination to reclaim a place at the top table.

“I genuinely thought that we would have enough to get to the final and potentially win it to send those boys off on a high. The way that we lost derailed us and it was quite sad but something we’re still proud of.

“I haven’t watched much Premiership since, more for my own sanity rather than out of disrespect for the competition. Although I respect the Championship and know everything it gave me, at this point in my career, I want to be playing in the Premiership. Hopefully we’re on the way to being back there next year."

With relegation from the Premiership suspended for this current season, there are again suggestions that it may become a more permanent arrangement.

Whilst it may provide entertainment for fans, it places an enormous strain on those clubs and their players who suffer the drop. Lewington and London Irish found themselves in a similar position five years ago and after being relegated, everything rested on an instant return.

“I find it strange that the Premiership can suspend relegation because of Covid but can put the whole Saracens squad and backroom staff’s livelihood on the line, and the likes of Ealing’s to be fair, to come back up during a Covid year, but I suppose it’s just a challenge that we’ll have to get our heads around,” Lewington said.

“Over the last 10 years, it hasn’t been the same teams getting relegated and having to do that yo-yo year. Everyone seems to want promotion and relegation. It does create a form of excitement, but I’ve been there when London Irish got relegated and saw what it did to people’s lives. They made the decision to try and hold onto the squad, but the backroom staff got completely depleted and that was off the back of our own performances.

“I suppose from a player’s point of view, it is a good thing in terms of being a young player getting chances and being able to develop. From a rugby club’s business and longevity point of view, I’m not so sure.

“At some point, there needs to be a decision and that’s got to be the framework for the next five or 10 years and people have just got to back it because I think the players end up suffering more than anyone else with the uncertainty of everything.”

Lewington's prior exposure to the Championship, and achieving success in it, may prove crucial to a much-changed Saracens side.

The make-up of the squad has undoubtedly shifted over the winter months, leaving them with experience gaps. Despite that, anything other than winning promotion will still be considered a huge failure.

Two defeats to Ealing in the recent Trailfinders Cup, which also involved Doncaster, has whetted the interest of neutrals and turned up the heat on Sarries, but the biggest pressure they face is still that which they place on themselves.

Ealing are likely to be Saracens’ biggest rivals in the coming promotion battle, and whilst those reverses will have been unwelcome, they came in a pre-season tournament, not the main event, and still proved valuable.

“Although these friendly games have been good in terms of shaking a bit of rustiness, once you put something tangible on it, the importance really does bring a lot more energy than just a regular pre-season game,” said Lewington.

“Ealing will be very happy with the result. It’s psychologically great for them to have beaten us, but at the same time, we expect our level of performance to be a lot better than it was in those games. It will be interesting this season if we get to the final. You kind of hope and expect it will be those two teams.

“It’s more about driving our own standards. We lost those games which we wouldn’t have wanted, but at the same time, a lot of the playing group will have learnt a lot from it and our end goal this year isn’t to win the Trailfinders Cup, it’s to win the Championship. We’re building and then we’ll move on into the season which is the exciting part.”

Sarries will kick off their Championship campaign with a trip to The Mennaye Field to face Cornish Pirates on Saturday.

Their detractors, of which there are many, will be hoping that a South West shock is on the cards.

Saracens may polarise from Penzance to Castle Park, but it’s clear from speaking to anyone in the know that they hold a special place for those lucky enough to be involved with them.

“When I first met with the coaches before I joined, we didn’t really talk about rugby, we talked about me as a person,” Lewington said. “What I was doing outside of rugby, my interests, then the last 10-15 minutes we did talk about rugby and that also aligned really nicely. I came out and I laughingly told my agent, ‘If you don’t get me to this club, then you’re not gonna be my agent’ basically. He knew how much I wanted to join.

“Once I arrived, it was the sort of environment where their outlook on everything is to treat you as more of a person than a commodity.

?? "It's great to put in a performance like that building into round one." ??@AlexLewington48 is coming home with a hatty and good vibes ??. Reaction to a good night in Coventry. #StrongerTogether ???? pic.twitter.com/1R5A6iQUZ9

“They get a lot of things so right in terms of looking after everyone. Nigel Wray obviously has taken some scrutiny off the back of the salary cap breach, but I can honestly say I’ve never come across a more generous man, especially within rugby.

“When I signed, I got a handwritten letter from him, little things which you think are insignificant, but I promise you I’ve never had anything like that before. Considering I left Irish without so much as a farewell, those things really make the environment more friendly and wholesome, it’s more of an experience rather than just playing rugby.”

Whatever anyone’s thoughts are of Saracens, it’s certainly never dull in NW4, and with 20 tries in 36 Championship appearances, plus another 40 in 107 Prem outings, neither is watching Lewington.

Having returned to action with 80 minutes in the first of Saracens two friendlies against Coventry recently, he marked the conclusion of his rugby exile with a hat trick in the return game, reminding everyone of his finishing ability.

Lewington will have a big part to play for Saracens in what he’ll hope is another successful, and final season in the Championship.

Alex is also an ambassador for LooseHeadz; a foundation set up to tackle the stigma, open up the dialogue and begin to turn the tide against poor mental health.

Most importantly, check in on those around you and don’t be afraid to reach out.