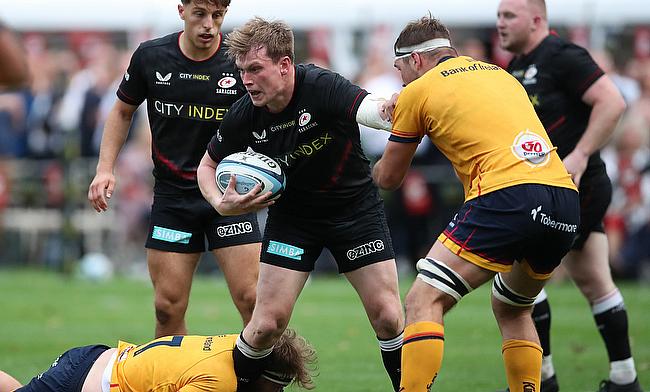 There are few players to have caused such conversation in the Talking Rugby Union office than Nick Tompkins.

Aged just 26, it could well be argued he has been one of the highest performing centres in rugby, a steadfast regular for Saracens for almost the entirety of his career before Wayne Pivac’s Wales came calling.

Since his debut against Leicester Tigers nearly nine years ago, Tompkins has only ever continued to flourish with the club that first gave him a chance. In his youth, he was a flanker - which is clearly seen in how he defends within an inch of his life - and his eye for attack was the reason for a move further backfield.

Rugby is, of course, a balance between both attack and defence, which Tompkins marries perfectly in the midfield. It is this ability that made him the talk of the office and, as I understand, a cause of envy when it was revealed he would be speaking to me.

When it became clear that Saracens were being relegated following their salary cap breaches, Tompkins was one of several players to leave the club on a temporary basis.

But whilst the likes of Ben Earl, Max Malins and Nick Isiekwe would be remaining in the Premiership, the centre set his sights on South Wales.

Having made his international debut at the Principality Stadium against Italy in the 2020 Six Nations, a move to Newport gave him the opportunity to embrace Welsh rugby on a day-to-day basis, as well as experiencing a new environment.

“I think going away, especially for me, was a really good opportunity to go into a new group and have a bit more responsibility,” Tompkins said. “It was unbelievably good for personal growth to have that experience and learn more about myself.

“I have been at Saracens my whole life, so to be out and to see a different culture was brilliant. They [Dragons] were brilliant as well. I had a great time and Dean Ryan is doing good things and I believe that they are going to do well.

“I had spent the majority of my time (up to that point) in West Wales and North Wales because that is where my Gran is from. I know North Wales really well and I didn’t know Cardiff well at all, other than playing games there.

“So for me to get to know the place and get a real feel of it, whenever I go back it feels like a second home. I am forever grateful for that because I feel completely at home going back. It was just a shame because of Covid, but it was still good.”

Of course, the negative side of his move to Wales was the pandemic. Tompkins’ time at Rodney Parade was as sterile a rugby experience as rugby can get, with days largely consisting of trips to and from training, outside contact limited and a Pro14 season played in front of no fans.

Newport’s sporting mecca is one of the oldest grounds in the Football League, having been opened in 1877. In years gone by, Bryn Meredith, Dan Lydiate, Malcolm Thomas, Stuart Barnes, Percy Montgomery, Taulupe Faletau, JJ Hodges and Colin Smart have put on the shirts of Newport RFC and Dragons.

See all of the action from Thursday's match against Ulster at the HAC ??#StrongerTogether ????

He might have added his name to an already overflowing list of internationals to have played their domestic rugby for the team, but never getting to fully experience what it would be like to be a Dragons player in front of a capacity home crowd is still a disappointment for Tompkins.

“I never got to play at Rodney Parade in front of a crowd and I think that would have been awesome,” Tompkins said. “That is not a regret because I couldn’t have helped it, but there is a real sadness there because that would have really been the whole culture of it and I would really have been able to get immersed in it.

“I suppose, coming away from it, that is my biggest sadness about Dragons that I was never able to fully immerse myself in the culture because I didn’t get to see the fans or do as much stuff as we could have done like going out with the boys and stuff like that.

“So, it is tough in that sense and that is a real sadness for me because I think it would have been a really interesting and fun period of time.”

Upon the conclusion of Dragons’ Pro14 season, Tompkins returned to Hertfordshire in order to play a part in Saracens' time in the Championship. It had already been quite the journey for one of rugby’s most decorated clubs, a loss to Cornish Pirates on the opening weekend of the season seemingly blowing the competition wide open.

Back with the squad for the fifth round, Tompkins wouldn’t pull on a Sarries jersey until a week later when Mark McCall’s men made the long trip to Castle Park to take on Doncaster Knights.

Having been away from a club he has a clear and deep affection for, it was very much like going back to school following the summer break.

“It was one of those where lads were just happy to see me and I was happy to see them,” Tompkins said. “It was honestly such a good environment with such joy. There are my old mates that I have known for 10 years.

“Mark said to me that I was like a ‘giddy puppy dog’, just running around and saying hello to everyone. It was that kind of a vibe.”

Ultimately winning the clash 50-15, it was a game in which it became abundantly clear Saracens were not resting on their laurels with Elliot Daly, Sean Maitland, Owen Farrell, Aled Davies, Mako Vunipola, Jamie George, Maro Itoje and Billy Vunipola all involved in Yorkshire.

By the season’s end, Tompkins and Saracens had made their way to second in the Championship table, five points adrift of Ealing Trailfinders. A two-legged play-off final followed in which the Welsh international scored a try in each game to help take his team back to the big time.

After the rollercoaster that had been experienced by all of those at the StoneX Stadium, for Tompkins personally, his time in the second tier was a more than fulfilling opportunity.

“For me, my biggest emotion was the fact that I had the opportunity to come back and help the boys in a really tough period,” Tompkins said. “That always really played on my mind throughout the whole of that year when I was away with Dragons and Wales.

24 - Nick Tompkins has beaten the most defenders in this year's Six Nations (24), also ranking joint top for breaks (7, level with Tomos Williams), 2nd for metres (234) and joint 3rd for offloads (6). Dragon. pic.twitter.com/Zx7o92i3HM

“The lads back here were scrapping it out and fighting, arguably for careers and the club, and I wasn’t there. There was an element of – and it couldn’t be helped – but I didn’t want to abandon the club, so the fact that I was able to go back and help them in the play-offs meant an incredible amount.

“It was one of those things where I am incredibly proud to have been able to do that and I am proud to have that medal. For me, it was nice to come back, help the club and not to abandon them.

"I know a lot of other boys didn’t get that opportunity, so I am very grateful, and I feel that has brought me closer to the club and it has given me a much more personal tie. I am forever grateful for that opportunity.”

Walking back through the door

Coming off the bench twice and starting once for Wales this summer, Tompkins is back experiencing day-to-day life as a Saracens player. Playing in each of the club’s pre-season friendlies against Ulster in recent weeks, what comes next is a trip to Ashton Gate to take on Pat Lam’s Bristol Bears as Premiership rugby returns.

Bristol made the play-offs last season, securing a home semi-final only to be unceremoniously dumped out of the competition by a Harlequins side that would eventually take the trophy home with them from Twickenham.

What could easily be forgotten is the fallout from the Saracens situation. There was anger, distress and, more than anything else, there was fighting amongst the other clubs. Whether this was in the boardroom, on social media or in the press, the circumstances that surrounded Sarries' enforced relegation was a hot topic of debate.

“I’d be lying if I said there wasn’t a chip or a sort of resentment to some clubs that were very vocal and some of the hypocrisy that was going around,” Tompkins said. “At the end of the day, how much good would that do?

“It might fuel us for one game, but that is not sustainable. I think, from our point of view, we are here to prove to ourselves why we deserve to be here, and this might be the most important season we have ever had and the most meaningful as well.

“It is one of those where we have really got our backs against the ropes and there is a lot of people that are against us and don’t want to see us succeed and I suppose we like it that way. We have come up like that and we are now, again, the underdogs and I think for us it is all about the journey.” 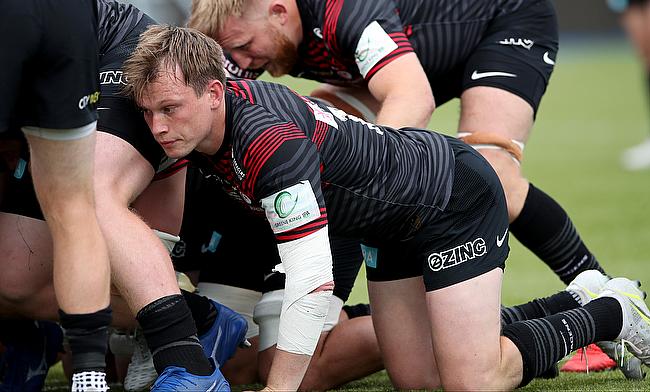 What Friday marks for Saracens is the rebuilding of a legacy shattered nearly two years ago. It will not be easy, but for a club that has won four Premierships, an LV= Cup and three Champions Cup trophies during Tompkins’ time as a senior player, any notion that the North Londoners will not be contenders for the title this season is more than wrong.

Numerous British and Irish Lions will once more be pulling on the shirt, with the rest of the squad littered with internationals and up-and-coming players. With that in mind, Tompkins is hopeful that this current crop of Sarries will develop together this season.

“You could say that we are going for the Prem, the titles and that we want to beat everyone, but realistically anyone can say that,” Tompkins said. “I think it is more important that we need to enjoy this journey and we need to enjoy the process of being in the Prem and getting better and seeing this season for what it is.

“Once we do that and once we get that going, the outcomes will take care of themselves and whatever happens, happens. We can hold our heads high and I think it is really important for this group to really enjoy that and grow because then you never know what is going to happen.

“I’m not going to beat around the bush, we obviously want to win everything, and we want to beat teams by a lot of points. That’s what we want to do. More importantly, we need to grow as a group, and we need to be with each other and I think that is the most important thing.”