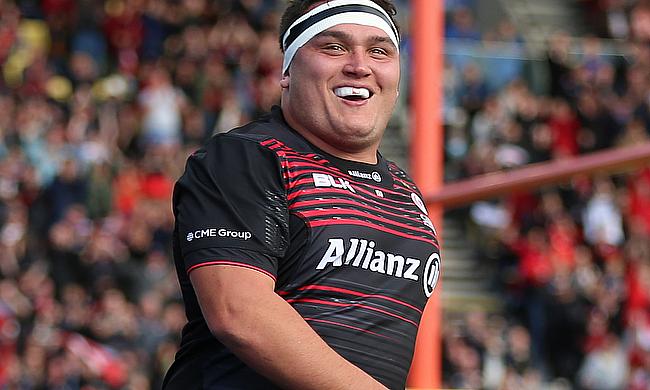 Max Malins scored four tries as Saracens went on to defeated an understrength Wasps side with a 56-15 margin in the sixth round of the Gallagher Premiership at StoneX Stadium on Sunday.

This is fourth win for Saracens in five games as they climbed to the third place in the table while Wasps are at 10th place after suffering their third defeat in five matches.

Wasps had 16 players unavailable due to injuries and their problems compounded with Will Simonds, Tom Cruse and Ben Morris going off the field in the opening half.

It took Saracens just four minutes to get the opening points with skipper Owen Farrell slotting a three-pointer and in the 10th minute he slotted another penalty goal to take them to a 6-0 lead.

The 12th minute saw Aled Davies and Vincent Koch combine to send Jamie George over the line and Farrell kicked the conversion to make it 13-0. Jimmy Gopperth opened the account for Wasps with a penalty of his own in the 18th minute before Malins scored the first of his four tries in the 20th minute after good work from Alex Goode and Maro Itoje.

Farrell followed with the conversion as Saracens completed the opening quarter with a dominant 20-3 lead.

As the break was approaching, Billy Vunipola touched down at the back of a scrum and as Farrell was once again spot on with the conversion, Mark McCall's men raced to a 27-3 lead heading into the second half.

Saracens extended the dominance into the second half with Malins completing his second after he was set up by George but Farrell's conversion drifted wide as the scoreline became 32-3. Gopperth provided some consolation for the visitors with his try in the 53rd minute after collecting a long pass from Ali Crossdale and two minutes later Zach Kibirige also followed the suit making it 32-15.

There was no looking back for Saracens as Malins scored two more tries in the 60th and 63rd minutes and with 10 minutes left in the game Alex Lozowski dived under the posts making it 49-15. Ben Earl capped off a fantastic game for Saracens with the side's eighth try in the 80th minute to complete a massive 41 point victory.