Dell keen to return to action after spell on sidelines 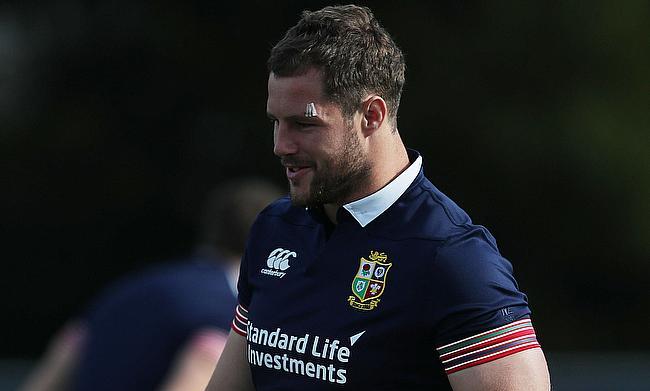 Scotland loosehead prop Allan Dell has lifted the lid on the injury woes which left him unable to put on his socks without feeling pain at one stage last season.

Rewind to summer 2017 and everything was going right for the South African-born front-row man.

After helping Scotland beat Australia in their own back yard he was called-up, along with international team mate Finn Russell, to the British & Irish Lions squad that was in New Zealand.

To be involved with Warren Gatland’s midweek team was a surprise for the player himself and many pundits, but nevertheless after that high point he was ready to really kick on and take his career to the next level during 2017/18.

“On the plane coming back from New Zealand I started to think I could really get my diet back on track, get back into some real shape and be the player that people had first seen when I came to Scotland [in 2013],” Edinburgh Rugby’s Dell told TRU this week.

“However, when I got off the plane from New Zealand I had two bulging discs in my back. I had an injection and tried to let things settle down naturally, but they didn’t.

“I was still not feeling great just before the Krasny Yar and London Irish games in the [European Rugby] Challenge Cup and then I tore my left groin and had to have an operation to reconstruct that.

“With an operation to also sort out the bulging discs in my back I had these two operations back to back in the space of 10 days I think it was. That kept me out for ages.

“I couldn’t do anything, you try everything you can to get back, but if you cannot even put your socks on in the morning then you just don’t know what to do.

“Most rugby players if they go for a scan will have bulges in the back, but I was just unfortunate that the discs were hitting the nerve going down to the foot so I had no power down my hamstring and there was a pain always shooting - and just bending over to try and put my sock on brought a sharp pain.”

Although Dell, who qualifies for Scotland through his grandmother Joan Carmichael, got back in time to play in the last three games of Edinburgh’s Guinness PRO14 campaign and then went on the 2018 summer tour with Gregor Townsend’s national squad, he has still been managing that pain in recent months.

“I have still got the pain, but I can look after it now and it isn’t sore all the time and I am used to it,” the 26-year-old explained. It was frustrating wanting to kick on and establish yourself and then have that happen, but whatever happens happens and I am just looking forward one day at a time now, looking after my body and improving my game”

“Nobody is ever 100 percent, but I am feeling good. I feel better than a have in a long time.

“I am enjoying getting my fitness up, playing without that discomfort and pain after such a long time is great. That is down to the management and the backroom staff.

“It was really only two weeks ago that the pain subsided. I have been able to run a lot more and it has been good. You appreciate getting your body right again.”

Allan Dell on the injury frustration that drove him to the brink after his bizarre experience with the Lions and on how he's answering criticism of his scrummaging https://t.co/dEREYI02qk

And Dell’s return to full fitness could not have had at a better time for Edinburgh with current first choice loosehead Pierre Schoeman currently sidelined following a red card.

He has already missed last week’s PRO14 win over Benetton Rugby while Dell is keen to keep the number one jersey for Friday’s league meeting with the Cheetahs.

In Schoeman’s enforced absence, they also take on Montpellier and Toulon in the Heineken Champions Cup pool matches.

“Pierre is a good player, I remember him from back home and used to play against his brother,” Dell, who has 13 Scotland caps under his belt, said of his fellow South African-born scrummager.

“It is unfortunate for him to be out, we all know what happened [against Leinster when his elbow struck an opponent’s head] and by the letter of the law it is a red card.

“It is unfortunate for us running up to the European games, but it is good that [head coach] Richard Cockerill has been managing the rest of us looseheads well and he has got his plan to work with us and what games he is going to play us in and we have to make sure we take our chances.

“Me and Rory [Sutherland] and Darryl [Marfo] have to put our hands up.

“There are a lot of exciting players at the Cheetahs and they are dangerous, every game they play in is exciting.

“If you switch off for one second they can score so you have to stay awake on Friday night and really concentrate.

“They are physical and they can bash it up, but they go wing to wing too. We want to make a statement after the poor defensive performance against Treviso.”