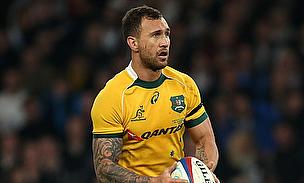 Hurricanes blow away Rebels
Super Rugby Round 6 XV: Dan's Back
Super 15 Rugby - key learnings as round 6 kicks off

Quade Cooper missed a last-gasp drop goal attempt to hand the Lions an 18-17 Super Rugby win over the Reds in Brisbane on Friday.

Cooper, back with the Reds for the first time since breaking his collarbone in January, failed to get his kick anywhere near the target with the result that the 2011 champions slipped to a fifth defeat of the season so far.

The Lions held on to claim their third win and a first in Brisbane since 2009 thanks to tries from Harold Vorster and Warwick Tecklenberg as well as eight points from fly-half Elton Jantjies.

Cooper kicked the Reds into the lead in the 11th minute with a penalty only for the Lions to deliver an instant response, inside centre Vorster completing a sweeping move with a touchdown in the corner to put the away side 5-3 ahead.

The Reds also welcomed back Lachie Turner and James O'Connor but were unable to force their way past resolute Lions' defence.

Cooper missed from 25 metres after 30 minutes and a successful kick from Jantjies ensured teh Lions headed into the break 8-3 ahead.

The Lions were forced onto the backfoot in the second half by the Reds but they weathered severe pressure and then hit back themselves to go 15-3 up when flanker Tecklenberg capitalised on a messy Reds line-out to crash over the line.

Jantjies converted to put the Lions in the clear but the Reds stormed back into contention, helped by Ruan Combrinck being sent to the sin-bin for taking out scrum-half Will Genia.

Referee Glen Jackson awarded a penalty try which was converted by Cooper to make the score 15-10 and the Reds then played some fine rugby - with Genia and Cooper to the fore - to set up a grandstand finale when Sam Kerevi crossed with 10 minutes to go.

Cooper converted to put the home side 17-15 ahead but ill-discipline at the breakdown gave Jantjies an opportunity to add another three points which he duly took.

Chris Feauai-Sautia thought he had scored a match-winning try for the Reds with five minutes to go only for the TMO to rule that he had knocked on while trying to ground the ball.

And although the Reds won the ball back from the scrum that resulted, and worked the ball into a prime position for Cooper's shot at goal, his effort was charged down and following that, the home side knocked on to enable the Lions to emerge victorious.