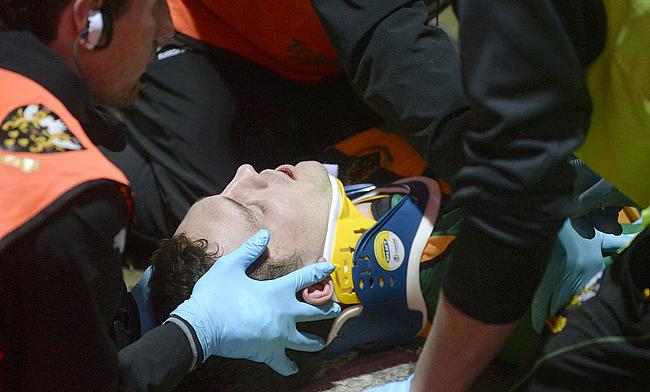 Rugby fraternity has criticised the verdict made by Concussion Management Review Group (CMRG) on George North's concussion case after they failed to sanction Northampton Saints.

The Wales international was knocked on by Leicester Tigers' Adam Thompstone in the Aviva Premiership clash on 3rd December but was cleared by the Saints to continue playing despite North's history of head injuries.

A joint independent review conducted by Rugby Football Union and Premiership Rugby revealed that there were enough video evidence that North should not have returned to the field, though they also cleared his club Northampton Saints from any charges as they described the Aviva Premiership's act was not deliberate.

The Rugby Players Association in a statement said a sanction on Northampton Saints would have sent a clear message to the rest.

''While we feel that sanctions would have sent a clear message about the gravity of concussion mismanagement, we welcome the recommendations outlined in the report,'' an RPA statement read.

"We are concerned with these findings," chief executive Peter McCabe said.

"Despite the CMRG (Concussion Management Review Group) reporting that the club followed concussion protocols and that the medical team had enough evidence available to them to make a decision, North, a player with a history of concussion, was allowed to re-enter play following the assessment.

"Serious questions have to be asked regarding the protocols: are they fit for purpose and are they being properly enforced? "

Peter Robinson, whose 14-year-old son Ben died on a rugby field in 2011 after being allowed to play on following a series of concussions slammed the decision of CMRG.

"It just stinks of everything that went on with Ben," he said.

"Nobody was held responsible and it was just, 'Oh well, we'll learn from it'. But we haven't learnt from it.

"The talk about player welfare being the most important thing is just words. What does that mean, when you're allowing a brain-damaged player to carry on playing but no one is held responsible?

"This is not complicated. Take concussed players off the field."

"Decision made by CMRG is a disgrace. Is this what we call player welfare @EnglandRugby @premrugby? What a depressing day for rugby," the South Africa-born lock said on Twitter.