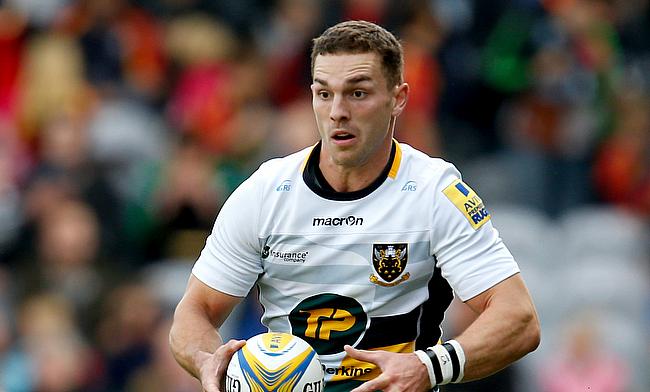 Northampton Saints is hopeful of Wales international George North been cleared to play for the upcoming Aviva Premiership clash against Sale Sharks on Friday.

The decision of Northampton Saints to continue playing North despite he was knocked down by Leicester Tigers' Adam Thompstone in their previous Aviva Premiership clash had drawn severe criticism following which the club assured that the wing will not feature for the Franklin's Gardens outfit until he gets clearance from independent assessment.

A Concussion Management Review Group was drawn to investigate on the issue and they are expected to reveal their outcome on Wednesday.

However, Northampton boss Jim Mallinder is confident that North is fit enough for the game but a final decision on his inclusion in the squad will depend on the outcome of investigation.

"He's back in training and he should be available to play against Sale," said Mallinder.

"As I said he's been training (on Tuesday), he's had a bit of time off and he's feeling really good about himself, he's looking really sharp out there and he's looking forward to playing.

"George is actually going back to the specialists, just to check again that everything's okay.

"I'm not making decisions on whether he plays or not, that's out of my hands.

"That's down to the trained professionals to make the right judgements.

"And surely there's no better people to make those correct decisions."

Last week, Northampton Saints were trounced by Leinster with a 60-13 victory and there were criticism on the squad selection of Mallinder at Aviva Stadium.

Tournament organisers European Professional Club Rugby (EPCR) are considering an investigation on the Saints to check whether they fielded the best possible line-up but Mallinder played down the criticisms.

"We stick by our decision, in that we've got a squad we register at the beginning of the season that we think are good enough to play in Europe," said Mallinder.

"And we played that squad.

"We did register one extra player, young James Fish who came in for Dylan Hartley, for obvious reasons.

"So that's what we decided to do, and hopefully the experience and freshness gained from them playing last week, hopefully that will benefit us down the line."