Andy Uren Exclusive: Personally I would love to get to a Premiership Final 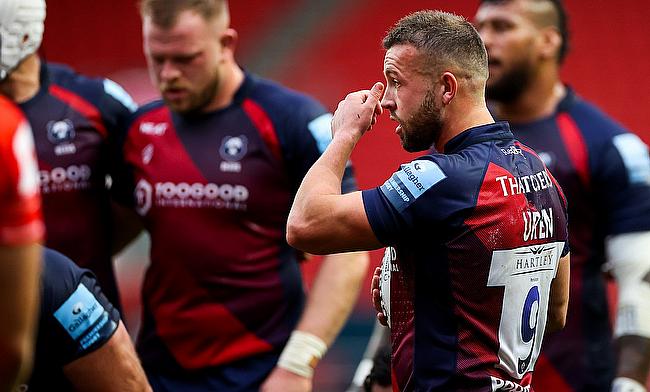 Andy Uren made his Bristol debut as a 17-year-old. Since then, he has remained as part of the squad, coming to the fore when Pat Lam joined the club as Director of Rugby in 2017.

One of the longest serving members in the Bears side, he is also one of several Bristol-born players that make up the core of Lam’s team. Empowered by his DoR, it has been under his current boss that Uren has gained the most game-time, working in tandem with Harry Randall to start in the nine shirt.

In Wednesday’s game against Leicester Tigers, Uren played the full 80 minutes. As ever, the scrum-half was the metronome in the side’s attack, guiding his side across Ashton Gate and to a bonus point win that puts the Bears on the precipice of a place in the play-offs.

Having played for the club in the Championship for several seasons prior to establishing himself in the matchday 23, Uren says Lam’s leadership has allowed him and the club to progress.

“In the last three years, we have signed players like Charles Piutau, Semi (Radradra) this year, Steve Luatua, all these world class players. Then, obviously the training ground, with the help of Steve Lansdown, we have probably got the best training ground in the world now and we’ve got one of the best stadiums in the world. The vision is coming true.

?? Growth and development
?? Race for the top four
?? @LiRFC threat

Pat Lam talks improvements, being in the mix and the @premrugby finale ahead of ®?2?2? clash. ????

“From what he put out on his first day is coming true and we are going to be in the Champions Cup next season, we are in the Challenge Cup final this year, so hopefully we can get international honours through some players and we bring through more and more Bristolians.”

In recent weeks, Uren and fellow scrum-half Harry Randall have been touted as potential England players. Each have thrived in the system that Lam has put together and the club's improved fortunes in the Premiership and Challenge Cup has put a spotlight on far more English players that could prove useful for Eddie Jones in the Autumn Nations Cup.

With such consistent and influential performances, each of Lam’s starting half-backs have been watched closely by Jones and his supporting cast of coaches. Again, Uren believes that this is thanks to the quality of players around him and the system that he and Randall operate in.

“We are lucky that we get along and we are mates,” Uren said. “I don’t think we would be able to do it if we weren’t very good mates and we are obviously quite young but then, we have so many experienced players around us which makes it so much easier. When you have got players like the ones I mentioned, as a nine, our system is very structured and very simple and you have pretty much got to be able to pass and get to rucks.

“He (Lam) has said that he is backing us and that they won’t bring in any big nine’s which is ideal for us because there is pretty much world-class players in every position. It is class for us to have the opportunity to actually play week in, week out in one of the best competitions in the world and in one of the best teams coming through in the world.

“I think with Eddie Jones and the international coaches coming to more of the games recently, obviously everyone wants to play international rugby. It would be strange if you didn’t as a professional rugby player, because that is the peak.

From the age of 17 to 20, Uren was somewhat in the wilderness with Bristol. After making his debut in 2013 in the British and Irish Cup, the young scrum-half was dual-registered to Dings Crusaders in National Two South in order to continue his development.

After that spell, stints with Cinderford and Clifton would follow before loans out to Hartpury and then Richmond. When Lam arrived at Ashton Gate, those loans stopped, with Uren playing a vital role in the club’s continued improvements.

Having spent many years working on his game, Uren says that he does credit his development to the time he spent plying his trade in the lower divisions and he recommends it to any youngsters coming through.

“I made my debut when I was 17 and I definitely wasn’t good enough to keep playing at that level,” Uren said. “One of the key things I will say to any young players is that you are not going to be playing week in, week out for your first team club. I would be like; go out on loan for one or two seasons in National One, the Championship, National Two and just play men’s rugby.

“That’s how you get experience and then you get, not bullied, but toughened up by playing men’s rugby. Kid’s rugby is just completely different to when you are getting the chance to play for your first team at your club. You have that edge already. You get less mistakes.”

After Bristol's victory over Leicester, their final regular season fixture sees them take on London Irish. The Exiles will be buoyed by their win over Exeter Chiefs on Wednesday evening whilst the Bears will arrive at the Stoop with everything to play for. All the games kick-off at 3pm on Sunday afternoon and Lam's side may not know their fate until the final whistle has been blown.

Level on points with Sale Sharks, who are hosting Worcester Warriors, Bristol must do everything they can to get five points and hope that Bath and Wasps falter too, in order to give them the best possible opportunity to play some knockout rugby next weekend.

Having only hoped to achieve a position in the top six when the Premiership kicked off 12 months ago, the opportunity of being in contention for a place at Twickenham in several weekend’s time, following their outing in Provence for Challenge Cup silverware, is something which excites Uren.

“We have spoken about it a lot,” Uren said. "Originally, we said we wanted to be top six. That was our goal and we have hit our goal. We wanted to be in the Challenge Cup final, but now we are here, and we are so close to being in the top four. Every Bristol player wants it.

“We want to win silverware don’t get me wrong, but that is not our main goal from the start of the season. But now we are here and at least for me personally, I would love to get to a Premiership final.”