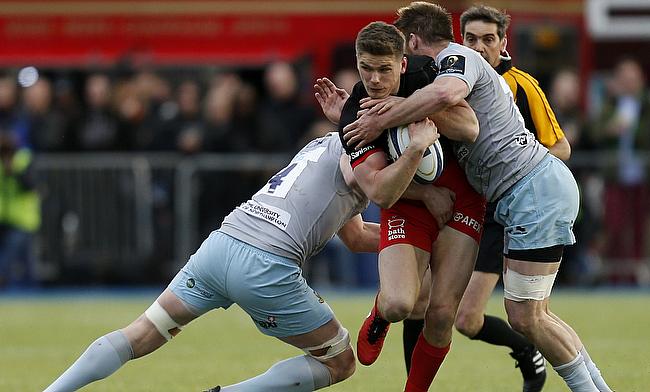 Chris Ashton on his return to form #AshtonsBack
Can anyone stop Saracens from winning the Aviva Premiership title this season?
Saracens hoping Maro Itoje will be fit for Northampton showdown
England and Saracens lock George Kruis cited for alleged bite in Bath match

Chris Ashton rescued Saracens from disaster as an injury-ravaged Northampton's brave attempt at causing a major upset in the fierce rivals' Champions Cup quarter-final at Allianz Park faltered late on in a 29-20 defeat.

The reigning English champions had romped through the group stage with six wins, claiming a try-scoring bonus point in all but one of them, but they failed to turn up for the majority of a match they were expected to win at a canter.

It took a 69th minute try from Ashton to push a team parading six of England's Grand Slam winners clear, the wing switching on the afterburners and picking a clever line to cross in the corner.

Ashton's try lifted his tally to three in two games since completing a 10-week ban for making contact with the eye area of Ulster's Luke Marshall.

On the other wing, Chris Wyles plundered a late opportunist try to assure victory, while Owen Farrell finished with a 19-point haul that saw him complete every shot at goal.

The result has set up an all-Premiership semi-final against Wasps, who were last-gasp winners over Exeter earlier in the afternoon, at the Madejski Stadium on April 23.

Northampton were squeezed into submission during the final quarter, but the fact they had pushed the tournament favourites so hard was an achievement in itself given their injury crisis.

Eight front line players numbering 207 caps - among them Dylan Hartley, Tom Wood and George North - had been lost to the treatment room yet they were responded resolutely with backs rows Teimana Harrison and Ben Nutley noticeably disruptive.

For all their injury problems, it was Northampton who left 11 points begging during an impressive start that saw the sin-binning of Saracens openside Will Fraser for a careless late tackle on Ben Foden.

Stephen Myler pushed two simple penalties wide of the uprights before wing Jamie Elliott dropped the ball over the line under pressure from Brad Barritt. In the same move, Nutley failed to put Kahn Fotuali'i through an obvious gap in the Fez Heads' defence.

The first Northampton try eventually came in the 16th minute, however, when Harrison easily rounded opposite number Billy Vunipola, broke down the right touchline before feeding Ken Pisi for the try.

Farrell replied with a penalty but Northampton remained in control with a mazy run from Elliott launching an attack that finished when Myler steered the ball between the posts.

A forward pass from Duncan Taylor to Farrell prevented a certain Saracens try and shortly after the Scotland centre knocked on as the English champions probed the midfield.

Billy Vunipola ran over Harrison from a scrum and Petrus du Plessis blasted a hole as the favourites made a bulldozing start to the second half, but a try from centre Taylor was ruled out after teammate Fraser was found to have unfairly impeded Luther Burrell in the score's buildup.

Myler and Farrell swapped penalties to leave Saints 13-12 ahead before Courtney Lawes flattened England team-mate Farrell in trademark fashion as a nerve-shredding final quarter counted down.

However it was Saracens who found the extra gear when it was needed, creating the gap for Ashton to acrobatically dive over before Wyles' own score finally brought a sense of relief to Allianz Park. Lawes' late try ensured the Saints didn't go down without a fight although it was little more than a consolation score.