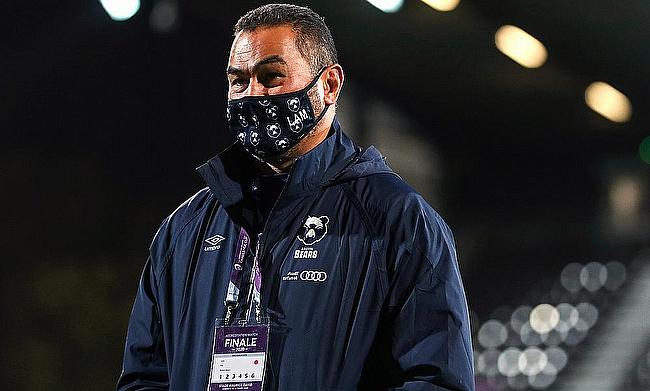 Five months have passed since Bristol Bears tasted European glory and Pat Lam’s pursuit of more success on the continent continues this weekend.

Their Challenge Cup triumph over Toulon in Aix-en-Provence last October was just another significant step for a Bears side who head into Sunday's Round of 16 Champions Cup tie against Bordeaux-Bègles in fine fettle.

Bristol have won their last five Gallagher Premiership matches and sit comfortably at the summit of English rugby’s top flight and by the time they step out at the Stade Chaban-Delmas, it will be just over two months since they last tasted a defeat.

Playing in Europe’s elite competition has been a goal of Lam’s ever since he first arrived at Bristol. He admitted on Wednesday during his pre-match press conference that his words were “scoffed at” when he set the lofty target of the Bears being in the Champions Cup when they were promoted from the second tier in 2017/18.

However, despite currently leading the charge in the Premiership and experiencing European glory last term, Lam knows this weekend’s meeting with Bordeaux - who Bristol beat in last season’s pulsating Challenge Cup semi-final - is all part of their continuous journey.

Fastest try in European rugby history ??
Battling back from behind ??
Big performers all over the pitch ??

“I made it very clear that this [winning the Champions Cup] is on our wall [at Bristol's training ground],” Lam said. This is what we have worked for. This isn’t a one-off season. We are in to our fourth season growing, developing. When I first said it, people probably thought that we should be thinking about just getting promoted from the Premiership, but you have to have that goal.

“Even when we were winning games against Bedford and Richmond and Hartpury, the standard was Champions Cup.

“Everything was in this tournament so we can compete. We never got complacent with victories or losses. We just took our learnings in preparation to come and beast this competition so we are excited to be here.

“We are certainly more prepared now to be here than we would have been the previous years because we have been building, but everything has been geared towards playing these sorts of games. It is great being here, but that doesn’t take away the difficulty of the challenge.”

Bristol’s chances of progressing to the quarter-finals have been boosted this week as Semi Radradra looks set to play back-to-back games for the Bears following his return to action against Harlequins last Saturday.

The Fijian sensation was superb as Bristol fought back to clinch a dramatic 35-33 win at Ashton Gate and Lam admitted the former Bordeaux man is relishing facing his old side this weekend.

“Semi did well and came through 80 minutes”, Lam added. "We weren’t planning on him playing 80, but he did. His game was very stop-start in that second half and that worked in Semi’s favour so he is raring to go again. He felt he wasn’t at his best so he has trained hard so far.”

Lam will be pleased to have Kyle Sinckler available to him once again after the prop also returned in last week’s win over Harlequins following his international commitments with England.

The 28-year-old came off the bench with 35 minutes to go and after sparring with Joe Marler at scrum-time, it was Sinckler's last-gasp try that snatched the victory for the Bears.

And his Director of Rugby feels he is a leading candidate to start for the British and Irish Lions against South Africa this summer.

Lam added: “I was pleased for Kyle. Joe gave him a good wind-up through that whole game! I have got a lot of time for Joe, but Kyle kept his composure and probably got the last laugh at the end. That was good to see the way he handled all that.

“When Kyle was away [in the autumn with England] he talked about being only 20 per cent, and we were like ‘jeez, that’s a low number’ because he’s been brilliant.

“He’s flourishing and he’s just going to get better and better. Even in today’s session, I said ‘have a rest’ and he said ‘no no no, I want to keep going’.

“I have got so much time for him. He absolutely loves it here. He’s bought a house just around the corner from the training ground! He can practically walk here!

“I think it was a tough bubble that those [England] guys were in [during the Six Nations], but he got back and he came back in and he was so happy to be back. It was like he never left and that was pleasing.

“For me, the Lions is the best of the best in the northern hemisphere. There is no dead cert in any position, but is Kyle good enough to be a starter for the Lions? I believe he is but that is not my call.”

Despite having Sinckler at his disposal this weekend, Lam looks set to be without captain Steven Luatua who could be absent with a knee injury, whilst winger Siva Naulago is also being monitored.

Scrum-half Harry Randall may feature in France, though, just five weeks after picking up an ankle injury while training with England during the Six Nations.