Bristol Bears are prepared to be ‘hunted’ says Pat Lam

by Will Sherrington  Wednesday 3 March 2021 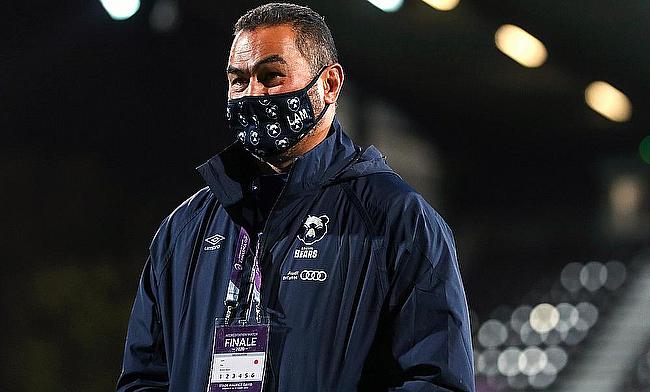 Sitting top of the league, Bristol Bears Director of Rugby Pat Lam has called for mental strength from his players as they aim to dig deep and extend their lead at the top of the Gallagher Premiership.

The Bears displayed their grit and determination to claim a 17-3 victory over Leicester Tigers last weekend, and with Sale Sharks beating title defenders Exeter Chiefs, it means Bristol head into this Saturday’s clash with Worcester Warriors six points clear of the chasing pack.

Having stolen a march on the champions, Lam has told his players to expect a challenging second half of the season.

In his press conference on Wednesday, he said his players are preparing to be “hunted” as they find themselves at the summit of the Gallagher Premiership.

He said: “It’s like when you climb a mountain, the halfway point is tough, but the next half of the journey is tougher. There are players in our group that have always been the ‘hunters’, and now we’re the ‘hunted’.

“It’s coping with that and realising that even just a little slip which you could get away with as the hunter, but there are small margins for error when you’re the ‘hunted.’”

Lam’s side finished in the top four last season before suffering a defeat in the semi-finals by Wasps, but now at the halfway point of this season, Bristol find themselves in the driving seat and are looking to make sure of their first-ever Gallagher Premiership title.

Lam attributes the progress over the past year to his team and staff’s collective growth but maintains that the main goal is to be ahead after 22 games.

He said: “[The league table] just gives you a guide of where you’re travelling, and as I’ve said many times, it’s not about being top of the table midway, it’s about being there at the end so we’re on that journey and we’re ahead.

“I had a quick look at where we were this stage last year, and I think we were on 30 points and sitting in 3rd after 11 games so it’s a great credit to our growth, the staff and the players.

“Everyone is developing, and that’s what we’re about. If everyone gets better collectively, we get better and certainly from this point last year, we’ve made some big progress, and we continue to do so.

Bristol will be favourites for the clash at Sixways on Saturday as the Warriors have struggled to find their feet so far this season.

Although technically safe from relegation due to the RFU ruling last month, Worcester will be desperate to pick up points against the Bears to help dig themselves out of the bottom two.

With the experience of Chris Ashton and Matt Kvesic expected to be a danger, Pat Lam has warned that it could be as much of a mental battle as a physical one and has highlighted the quality of the coaching staff at Worcester.

He said: “They haven’t won since November. I know Jonathan Thomas and Mark Irish, and they’re making big changes over there, and they’re desperate for a win.

“[Jonathan Thomas] knows that the big focus of success is the collective. Having good individuals is great, but if they stay as individuals, then it’s not great. That takes a bit of time, and I know that’s what he’s working away on to improve all areas of the Worcester club.

“They’re good coaches, and I know what he’s trying to do. It takes a bit of time, so there’s no doubt that this will be a big one for them and their growth, and that’s the challenge we face.

Callum Sheedy has returned from international duty and is back in training for the Bears. The fly-half kicked Wales to victory in the Six Nations against England last weekend and is a welcome return to the squad.

Meanwhile, Lam did confirm the extent of Harry Randall’s ankle injury and the scrum-half has been ruled out for eight weeks.

Although Bears have been coping well despite their injury list, Lam admits they face a tough test in getting his players back fit with regular minutes on the pitch.

“It’s obviously frustrating because It’s probably the biggest challenge we’ve faced. We’ve got Callum Sheedy back this week after his exploits - he was very well celebrated for his efforts – but he’s getting consistent rugby.

“The biggest challenge we’re going to face is that Harry Randall has played no rugby since January the 9th, and by the time he gets back, it’s going to be three months of no rugby at all so, that’s going to be our challenge to get him back.

“Max Malins has played 27 minutes in 10 weeks, and Ben Earl has played 45 minutes of rugby in eight weeks, so by the time they get back [from England duty], it’s going to be 12 weeks. Hopefully, they will get some game-time, but if not, that will be our biggest challenge when they get back.

“We’ll be going into the home stretch when they get back - there’s some big games – Europe and Premiership games. People will expect them to be at their best, but that’s always going to be difficult when they haven’t had much game-time.

“We’ll deal with it, but the good thing is that we understand it. Now we’ve got to get the work done to try and deal with that challenge."