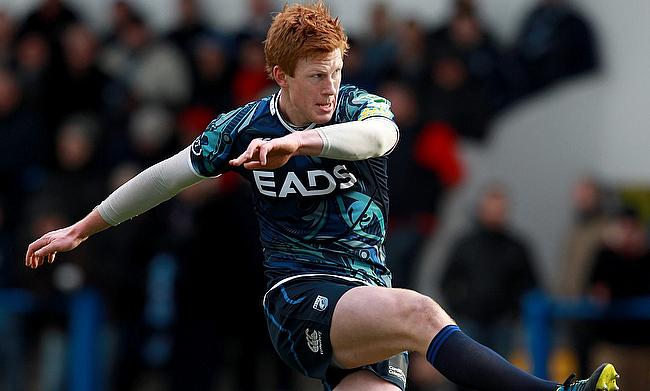 Harlequins rotate ahead of trip to Italy
Geraghty back to face Edinburgh
Les Kiss: 'Toulouse are predictably unpredictable'
Rees given seven-week ban for stamp on Nick Easter

Cardiff staged a stunning comeback to claim a 37-27 bonus-point win over Montpellier to keep hopes of qualifying for the European Challenge Cup's knockout stages alive.

Behind 20-7 just before half-time, the Blues responded - aided by two yellow cards for the visitors - with 27 unanswered points to finish with five tries .

A last-minute penalty from full-back Rhys Patchell meanwhile meant the losing visitors gained only a single bonus point from their four-try showing.

Patchell, who finished with 17 points, went over for the hosts in the first minute but Montpellier quickly turned things around with Jamie Mackintosh, Timoci Nagusa and Julien Malzieu all crossing the line in quick succession.

Josh Navidi kept Cardiff in the match with a try on the stroke of half-time before visiting hooker Bismarck du Plessis was sent to the sin bin early in the second half, with subsequent man advantage allowing Lloyd Williams to dot down for the Blues' third try. The French were then to find themselves two players down when Robins Tchale-Watchou was shown a yellow card but Cardiff could not score any more points during their absences.

However, shortly after the binned players returned to the field, Alex Cuthbert secured the bonus point try before Navidi went over for his second, and Cardiff's fifth try, all-but securing the win for the hosts.

But that was not the end of the scoring as Charles Geli crossed for Montpellier late on.

Meanwhile, Connacht are in charge of Pool 1 after a 25-10 win over Newcastle at the Sportsground.

Fly-half Jack Carty was the man of the match as he out-kicked his counterpart Craig Willis with six penalties to one.

Connacht led 12-3 just after half-time but Newcastle moved to within two points when Richard Mayhew was driven over from a line-out in the 56th minute and Willis kicked the conversion.

However, Carty struck two more penalties to put daylight between the teams again before Danie Poolman danced over to leave Connacht with three wins from three.

La Rochelle claimed a bonus-point victory over Zebre with a 27-19 win at Stade Marcel Deflandre.

A clinical first half saw the hosts leading 20-0 at the break thanks to scores from Benjamin Lapeyre, Jone Qovu and Kini Murimurivalu.

Fabien Fortassin ran in the fourth try after 57 minutes but Zebre rallied and Giulio Toniolatti and Guglielmo Palazzani went over before the visitors were awarded a late penalty try to secure victory.