Cara Cookland and Trudy Cowan Q&A: We have to fight for each game but we're getting a chance to build 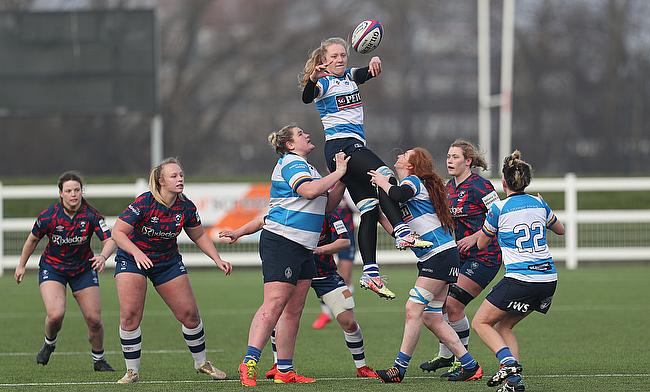 Sarah Beckett Exclusive: 'It's probably been the toughest year in my career'
Georgia Evans Interview: 'I want young girls to see there is a chance for them to play for Wales'
Women's rugby has shone over the last 12 months so what can the game achieve in 2022?
Danielle Waterman Interview: It is important that players are appropriately supported

Since that loss, they continue to battle on in the Allianz Premier 15s, with performances against title challengers Bristol Bears Women and top-four hopefuls Wasps Women certainly a source of encouragement.

DMP are the only side in the women’s top-flight who are not officially linked to a Premiership Rugby club, but despite their limited resources compared to others in the division, the girls are not letting the negative comments and tough results get them down.

TRU’s Elizabeth Cartwright spoke to fly-half Cara Cookland and Lock/Back Row Trudy Cowan to get an insight into the “unique” environment at DMP.

What's it like playing week in, week out for the Sharks given you are balancing a job alongside your rugby? Do you relish that challenge?

CC: I go to university in Leeds. I turned 21 in December and I'm in my third year. I'm studying sports coaching and really enjoying it.

Balancing Uni alongside rugby is quite difficult, especially in my third year as I'm writing my dissertation but being part of the Sharks is massive for me and I think it gives me a lot of confidence and I love playing with everyone else.

They're so nice and it's a family atmosphere. Everyone takes care of you, especially the older girls. They're all very supportive. The coaches are as well. They know what you're going through with Uni and if you are struggling, it's not forced upon you to do everything. If you're struggling, they will help you.

TC: It's fantastic. To be honest, I do, I love it. It's been my life for the past six years through university and through getting a job after uni.

I'm still teacher training so I'm technically still at Uni, but I’m doing it part-time and teaching maths at a secondary school as a trainee.

It's hard, there are nights when you really don't want to come to training and you don't want to know you're going to get home at 10pm, shower and then have a lesson plan to write.

However, there are huge positives too. I'll get a lift in with one of my teammates who always manages to make me smile and will take my stress away. Training sessions are always great fun and so are the tackling drills. It's what you sometimes need at the end of the day and we're all in it together.

It is great that the Rugby Football Union is helping DMP because unfortunately, you guys don't have the same resources as many other clubs despite producing a lot of internationals in recent years?

CC: Yeah, obviously all the other Premiership teams have a men’s Premiership side to go with them and they can get a lot of revenue from those teams.

Obviously, we're partnered with the DMP men who are in Nat One so they don't bring in as much as some Premiership teams do and that's obviously a struggle for us money-wise but the fact we've created such talent with international players like Katy Daley-McLean, I think it just shows there needs to be a side in the North East.

I think we've got to keep pushing and do the best that we can so that people see us as a team that they actually do want to join because we've got such a good family atmosphere here and we are working hard for each other. Hopefully then the young people coming through will want to join us and we can keep pushing to be where the other teams are.

The RFU and @DMP_Sharks have issued a joint statement at the midway point of the 2021/22 Allianz #Premier15s season.

The help from the RFU would be a massive deal for us and it's clearly very much needed. It's great we're getting that kind of support.

TC: I would agree. We can, we have and we will continue to talk about it a lot. The main point is we've not kept up.

We're still existing in the same way that teams like Richmond and Waterloo, Worcester before how they are now. We're catching up slowly but I think that's the main problem.

It's amazing to see the women's game develop. For me, it's pretty special. I dreamt of being a professional women's rugby player and there's now women doing that. It's an aspiration, it's something legit. It's just a shame that where we are right now and the situation we're in, it's still a little bit more of an aspiration than a reality for us.

Is it hard playing clubs that are full of internationals or do you relish that opportunity in some sense?

CC: For me personally, I see it as an opportunity to go up against the best and to try and prove to myself and other people in my team that some of us are that good and we are capable of putting up performances to some of the best players in the world.

TC: In this league, no club is going to have an easy game, every club presents a challenge. Each week gets tougher and we have to fight for each game we play in but we're getting a chance to build as a squad.

We're here to play and challenge the top teams, we love playing for one another and hopefully we can get some points on the board soon. We know each week is going to be tough and we have to fight for it but it really does feel like we're getting somewhere. We're a tight-knit group and we're doing all we can to get points on the board.