Sarah Beckett Exclusive: 'It's probably been the toughest year in my career' 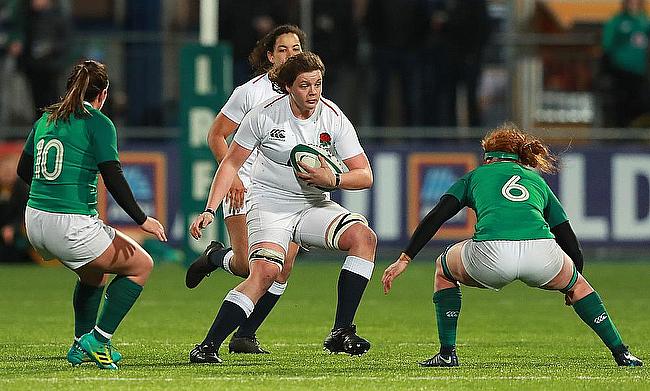 Six Nations Rugby and TikTok announce four-year partnership
Georgia Evans Interview: 'I want young girls to see there is a chance for them to play for Wales'
Women's rugby has shone over the last 12 months so what can the game achieve in 2022?
Danielle Waterman Interview: It is important that players are appropriately supported

This weekend, Harlequins take on Saracens in the Game Changer at Twickenham Stoop and there is an excitement in the voice of Sarah Beckett as the rivalry is set to be renewed.

"The girls and I are buzzing to go out there and play," says Beckett who's been playing for Gerard Mullen's side since 2019. "They're one of the best teams in the league and they're top of the Premiership table. We've been the only team to beat them this season and hopefully we can do that again."

The England international has every right to feel quietly confident. Beckett and her teammates recently beat Saracens at the StoneX Stadium back in December and most notably, in last year's final.

However, the No.8 is well aware of the threat they will pose come Saturday: "There's always a competitive edge against them, they probably feel the same way about us because of the rich history between the clubs. It's good to know we can beat them on the big occasions, but it's about us getting our stuff right, thinking about the job in hand on Saturday and not getting carried away."

You couldn't blame Beckett if she herself was to get slightly 'carried away' ahead of Saturday. The 22-year-old spent a significant spell on the sidelines following knee surgery over the summer, but now she is back in full flight as Quins look to build on last week's victory over Gloucester-Hartpury.

"It's been a really tough few months being out with an injury and sustaining two quite significant injuries back to back was really tough to take," Beckett tells TRU.

"It's probably been the toughest year in my career so far and I'm just loving being back playing. I've found joy in playing again and I'm having a good time. Going out on the pitch every Saturday and giving it my all for the team is what I love doing.

"When you're injured, you feel a bit bad that you can't give your all to the team but now I'm back, I'm trying to give everything I can and hopefully the girls can see that. I'm absolutely buzzing to be back and hopefully that's reflected in how I'm playing at the moment."

Beckett also made a return to the international fold during the autumn and with more than a third of this current season done and dusted, the Six Nations and the World Cup are creeping up on the horizon.

Before the showpiece event in New Zealand later in the year, the Red Roses will be out to continue their imperious form when the Six Nations kicks off at the end of March and on a personal note, Beckett will be hoping to play her part in another successful campaign.

Off the field, TikTok recently announced they would be sponsoring the upcoming tournament and Beckett believes it will really increase the exposure of women's rugby and grow the game even more: "It's super exciting. You're seeing a lot more of the girls creating TikTok accounts. To start with, it was the younger girls like myself, Jess Breach, Zoe Harrison and Ellie Killdunne getting creative but now some more of the experienced players are making TikTok videos. It's great for the game that we've got a title sponsor on board."

On the pitch, Beckett's immediate focus will be on this weekend's mammoth clash with Saracens and keeping the champions on track to finish in the top four, but the rescheduled World Cup will undoubtedly be in the thoughts of every Red Roses player.

With the competition taking place in October, Beckett, of course, would love to be selected however she knows there's a lot of hard work to do between now and then.

"The dream is to get there but there's a lot of time before then and we've got this season to finish, then pre-season and a build-up to the World Cup," she says. "I'll try and maintain my fitness going into that and try to put my best foot forward. I've just got to do everything I can to stay fit and hopefully get on the plane but I'm fully focused on this season playing for Harlequins. All eyes are on what's going on now."