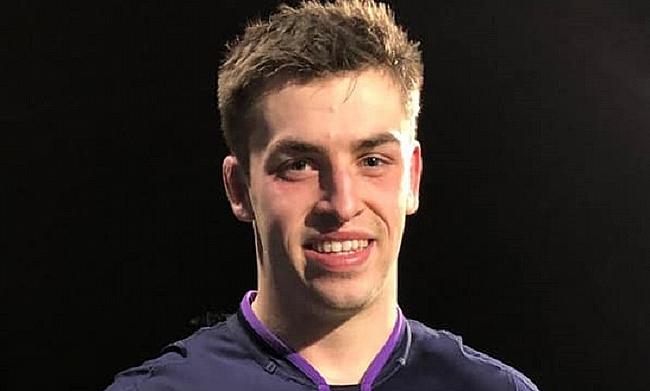 After growing up on the same street, two Scotland youngsters are on different roads to stardom
Scotland youngsters relishing opportunity in South Africa
Meet the Scotland starlet who has had a 2018 to remember
The move back home which kick-started Charlie McKill's rugby career

As young Scottish rugby talent Hamilton Burr flew to New Zealand this week to begin the next chapter in his sporting journey, he could well have looked back on the last few years with a lot of pride.

There have been ups and downs for the 22-year-old second-row/back-row to get where he is now, but having signed off after nearly three seasons with Stirling County in the Tennent’s Premiership in fine form and earned two Scotland Club XV caps against Ireland in the last fortnight, you feel that he has a bright future ahead of him.

Indeed, it is worth remembering that he turned out twice for Glasgow Warriors in 2016/17 and adapted to rugby well given that there was no real family history in the sport.

“I began playing for Aberdeen Wanderers when I was quite young up until under-16 level and then I went to Gordonstoun School for my last two years of school.

Here is a link to Hamilton Burr's 2018 rugby highlights. Hammy, who came through our youth section, is currently a BT Academy player and plays his regular rugby for Stirling County RFC where he is proudly sponsored... https://t.co/eQ3RNXlFaJ

“I played Caledonia under-17 and 18 level and then, after school, decided to head over to Australia for a year.

“While I was there, I worked as a gap student at a school [Scotch College] in Melbourne and played rugby [for Harlequins Melbourne], progressing to getting a shot with the Rebels under-20s at the time.

“There was lots of opportunities to play rugby out there as well as coaching at the school and the chance with the Rebels under-20s came a bit out of the blue.

“I played for them in a one-off tournament in Adelaide and I started two of the three games and played the full 80 minutes and that was the time where I began to think ‘I really want to push on with my rugby’.

“That kind of involvement really helped changed my mindset about the game.”

After Australia, Burr returned to Scotland keen to push for national under-20 honours and, while playing his club rugby at Aberdeen Grammar, made the first training camp before not making the cut down squad.

“That was quite tough to take at the time, but it just made me realise the parts of my game that I had to work on and I went away and put in the hard yards,” he explained.

“I was up against guys like Lewis Wynne [now London Scottish] and Ally Miller [Scotland Sevens and on the Edinburgh Rugby bench on Friday night] for back-row berths in that 20s team and I admit now I wasn’t quite up to that level at the time.

“I was then due to play for the Scotland under-19s, but I managed to tear my hamstring filling in on the wing for Aberdeen Grammar so that was frustrating and it meant that I never actually played for my country at age-grade level.

“In the summer of 2016 the opportunity came through [current head coach] Eddie Pollock to move down to Stirling County and it was a great chance for me.

“I was not in the [Scottish Rugby] Academy set-up at that point, but I was getting some strength & conditioning help from Fraser Murray who got me into great shape.

“Early in that first season at County, there were a couple of injuries and the like and that gave me an opportunity regularly to play at a higher standard.

Was fantastic to have the support of @AberdeenWandRFC and glad to hear they had a great day @StirlingCounty . Couldn’t be more thankful of their development in my younger years #aswands

“I got into the first team, turned a few heads and was offered a stage three [the highest level] Academy contract for 2017/18.”

As he was studying at college at Broadwood Stadium in Cumbernauld already, Burr actually got a head start with his Academy place and was allowed to train with the other young talents at that venue pretty much full-time from January 2017 onwards.

“That really helped me and I managed to play the Glasgow Warriors friendlies later in the year and was lucky enough to get some Guinness PRO14 minutes under my belt against Ospreys and Cardiff,” he recounts.

“That was a great buzz for me and my family and it was great to learn alongside Scotland internationalists.

“Unfortunately, at the minute, Scotland has a real skill at bringing through lots of back-row players - and very good ones at that.

“At Glasgow alone that season there were guys like Rob Harley, Adam Ashe, Ryan Wilson and Matt Fagerson and it was tricky to get a look in when everyone was fit.

“So, the decision was taken in the summer of 2018 to step away from the Academy set-up to go away and work on certain aspects of my game because I know I am not at their level yet.

CLUB XV | FT | That's it, a terrific game of rugby concludes in a tie. Ireland win the Dalriada Cup by 14 points following the first-leg. Congratulations ?? ??

“I know I am still young enough though and the door [to the top level] is not shut on me yet by any means within pro rugby.

“Over this season at County, I have kept myself busy with playing and extra training while I have been working as assistant development officer and have been helping players on the S & C side of things.

“I have also been working at Dollar Academy as an S & C coach while I have also been back in with the [Scottish Rugby] Academy working with some of the best young players that are coming through the system.

“It has kept me busy, but I have enjoyed it while the Club XV experience was good.

“I think I am pretty used to the gritty, physical style of rugby in Scotland, but I want to try and learn more about playing an open style and, having spent time previously in Australia, the southern hemisphere seemed a good plan again.

“While I am in New Zealand I will be playing for Hautapu near Hamilton and I can’t wait to get going in a new environment and will be putting my best foot forward.”