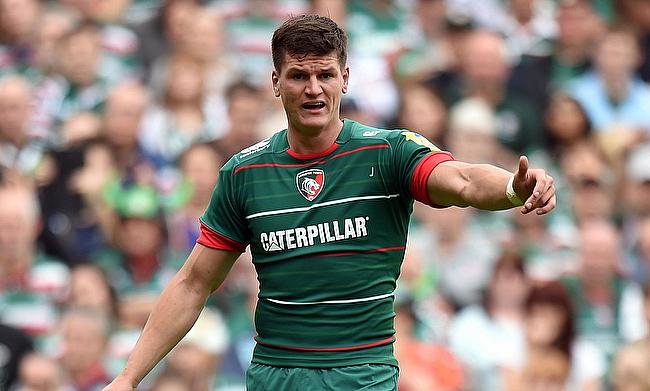 Freddie Burns kicked the decisive drop goal in the final minute as Leicester Tigers edged out Saracens 15-12 at Twickenham Stadium to win the Gallagher Premiership title.

This is the first title for the Tigers in nine years and their 11th overall as they overcame a stern resistance from Mark McCall's men, who had their first season back in the top tier after winning the Championship in the 2020/21 season.

In an emotional farewell, Ellis Genge, who is set to join Bristol next season held the trophy along with former captain Tom Youngs, who announced his retirement recently.

The game also saw Ben Youngs making his 318th appearance and now becomes the oldest player to win a Premiership at the age of 39.

An early infringement from Hanro Liebenberg allowed Owen Farrell to score the first points inside five minutes and they looked threatening as Mako Vunipola powered in putting pressure on the Tigers' scrum.

George Ford missed a penalty chance before the England playmaker, who is set to leave the club ahead of the 2022/23 season left the field with an ankle injury in the 24th minute and was replaced by Burns.

Saracens were down by a player temporarily inside the first half hour as Aled Davies was sin-binned for a high tackle on Julian Montoya and the Tigers seized the opportunity with Hanro Liebenberg forcing his way over the line and Burns kicked the conversion to make it 7-3.

Elliot Daly with a 31st minute penalty goal brought the gap down to one point but Leicester got their second try when a short-pass from Richard Wigglesworth sent Jasper Wiese over to make it 12-6 at the end of the opening half.

Burns missed a penalty chance early in the second half but Farrell with 16 minutes left in the game slotted his second three-pointer to make it 12-9 and with seven minutes remaining Andy Christie broke clear for Saracens and they had Tigers scrambling back to get back into their defensive line just five metres out.

The 75th minute saw Leicester lose Matthew Scott to yellow card for a high tackle on Billy Vunipola and despite the setback Burns proved to be the hero for the Tigers with a sensational drop goal with 22 seconds remaining that proved to be the difference.