Brown: Not many people focus on ‘the other side’ of rugby 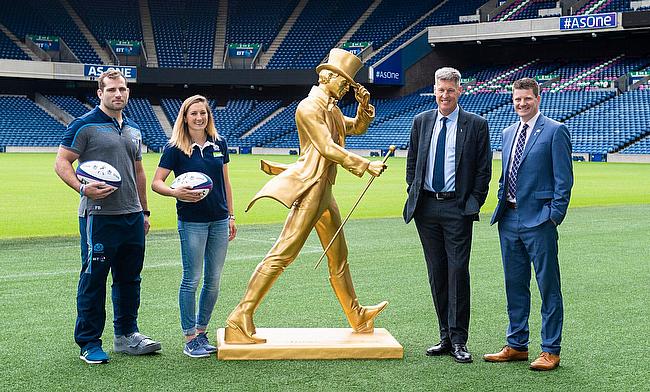 Graham flourished at under-20 level and he is now keen to keep soaring in the big time
Shark attack: Ewan embracing the World Championship with Scotland under-20s
Uncapped Glasgow duo Scott Cummings and Kyle Steyn added to Scotland's training squad
'Super Dunc' on the comeback trail and can be the “glue” in Scots backline

As international players from many different countries begin the long summer working together in World Cup training camps, the time that they spend together away from the pitch and the gym is very important, according to Scotland hooker Fraser Brown.

The highs and the lows of top-level sport have been well documented of late, one minute you can be starring for your team and the next minute you are injured or dropped.

To go from such positive moments to such negative ones can be tough for anyone to take and that will only be cranked up a notch as the showpiece event in Japan in September, October and November edges closer.

At that stage, players will be cut from the international training squads - in Scotland’s case 13 of the current group will not make it to Asia - and there will be some tough discussions to be had.

Of the squad working with Scotland head coach Gregor Townsend at their base on the outskirts of Edinburgh this week, 29-year-old Glasgow Warriors man Brown is the only one who cannot take a full part in training.

"Rugby pulled me out of depression."

He suffered a foot issue during his club’s Guinness PRO14 final defeat to Leinster last month and as a result, he recently had an operation on two of his toes and is currently going through a period of rehabilitation with medical staff.

All being well, it looks like the man with 42 caps to his name will be fit and firing in time for the World Cup, but as someone who has spoken out about mental health issues before, Brown knows just how important having team mates to talk to is going to be over the next 10 weeks or so.

“As a squad we get a two week break in July and in camp we have a lot of time built in [to have ‘down time’ and socialise] and the most important thing is making sure that guys are enjoying the time around training,” Brown told TRU.

“Even silly things, like how we warm up for training with little competitions, or times in the evening when guys can switch off completely or do things as a squad like go for a meal.

“Those times are really important to help you switch off, but also build bonds within the squad. This is the first time in four years that you're in [a camp] without games coming thick and fast so you get to know each other really well.

“I'm kind of on my own at the minute [doing my rehab], but to be honest, it's just nice to be in an environment with other players. I've got a lot of good mates in the squad so it is great mentally and physically at the end of each day to just catch up with the guys and have a laugh and a joke.

“Not many people focus on the other side of rugby rather than the physical, but it is so important.”

Meanwhile, Brown admits he feared his World Cup dream was over when he injured himself in May, but now he is on the road to recovery and aiming to come back fresher than ever.

The man who went to the 2015 tournament admitted: “Initially I was just thinking about the Glasgow game and was gutted to have to go off, but then a couple of days later I did start to think about timeframes for the World Cup.

Scotland’s prospects for the forthcoming Rugby World Cup in Japan have been given a timely boost with the news that both Fraser Brown and Duncan Taylor are likely to be fit in time to take part in the tournament https://t.co/itrFCTsc7J

“Thankfully in the middle of the following week I got the diagnosis and was able to start planning my rehab from there.

“We have such great support staff, the medics and the strength & conditioning team work you hard, you are in every day as you build back up from injury whether it is in terms of conditioning or weights or whatever.

“When they get you fit to return you are ready to go into a match there and then rather than having three or four weeks more to go to get up to speed.

“You are fresher when you come back - guys who have breaks in the middle of a season often finish strongly for example - so sometimes it can be a blessing.”

And Brown is targeting the third summer Test against Georgia away on August 31 for his comeback.

“The target for me is to be there or thereabouts for the last couple of warm-up games,” he stated, with the last summer Test being at home to Georgia on September 6.

“If I was ready to play some part in them then that would be nice, but we are just taking things week by week at the minute and then as we get further into the summer it will be a case of seeing where I am.

“Gregor has not put any extra burden on me to make sure I make the warm-up games, it is just a case of doing my rehab and building things up.”

As Official Whisky Partner, Johnnie Walker will now be the whisky of choice at all Scotland matches at BT Murrayfield stadium. As well as pop-up bars within the grounds, Johnnie Walker will also be creating bespoke brand experiences, giving home and away supporters a taste of Scotland on international match days.