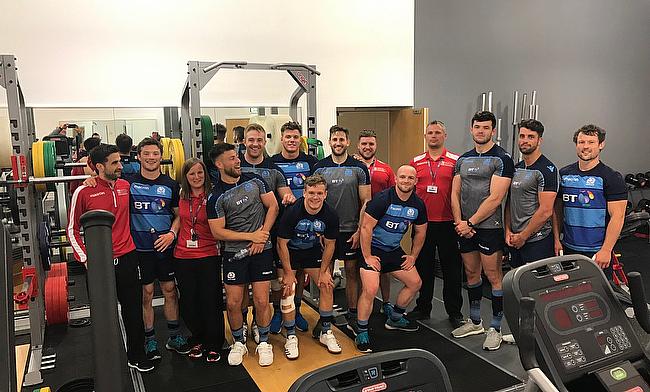 From sitting school exams one week to facing the haka the next: Rory’s remarkable rise
Shark attack: Ewan embracing the World Championship with Scotland under-20s
Tom can Marshall the troops and be a key man for Scotland in Argentina
Graham family hoping Darcy can write latest chapter at Twickenham

Darcy Graham starred for Scotland in two under-20s World Championship events so it is fitting that with this year’s tournament set to come to an end in Argentina on Saturday, the flying winger is continuing to make a name for himself on an even bigger stage.

During the 2016 age-grade tournament in Manchester, he announced himself to a wider audience with a wonder try in the Scots 15-10 upset win over Australia.

Sadly, a concussion meant that he missed the rest of the tournament as the injury-hit Scottish side finished eighth.

However, the man from Hawick is a tenacious character and he was back at the same event in 2017 in Georgia when again Scotland defeated Australia - this time 24-17 in a play-off match - to finish in fifth place.

That was the Scots’ highest ever placing at the event and to make it clear just how important it is that the current crop of players avoid relegation by beating Fiji on Saturday, 10 of the players who played in the famous wins over Oz in 2016 and/or 2017 are in the current World Cup training squad or have been capped by Scotland at full level since then.

HUGE thanks to @HighlandRFC for having us at their great facilities at Canal Park. ?? We'll have a gallery up later this evening!?? #AsOne pic.twitter.com/hnBtUZEI9F

Along with Kinghorn, Hutchinson, Hastings, Cummings, Ritchie and the Fagerson brothers, Graham, has been in Inverness this week training with Scotland’s 44-man squad which is building up to the World Cup which begins in September in Japan.

On Sunday, the national team players were split into groups and had to make it from Stirling to Inverness in the quickest time possible whilst completing tasks along the way in an attempt at team bonding.

“My group, the golden eagles, were first up to Inverness,” Graham was delighted to report to TRU at Highland RFC’s Canal Park this week.

“We just daundered along and didn’t expect to be first, but I think every other group got lost. It was good fun. We made memories we’ll look back on and laugh at before the hard work really started.

“The World Cup is the biggest tournament in the world, everyone wants to go and this is my chance to show the coaches what I can do, work hard on the field, get fit and put a bit of weight on and hopefully get on that plane.”

The Scotland squad brought an end to their opening training camp in Inverness by joining 176 youngsters from across 14 northern clubs for a game of Touch.

The kids there all wanted to be like Graham - and in a couple of years’ time, that could be in a red jersey if Edinburgh Rugby’s Richard Cockerill’s wish comes true.

Graham has been urged to think big and - as well as going to the World Cup - get himself on the 2021 British & Irish Lions tour to South Africa.

His club head coach Cockerill believes Lions’ supremo Warren Gatland will be keeping a close eye on him.

Shane Williams, a fellow small in stature speedster from Wales, became a Lions’ icon and Graham said:  “Richard Cockerill said in my one-to-one meeting [at the end of the 2018/19 club season] that I’ve cemented myself in the Scotland squad, so why not be the best winger in Britain and Ireland, not just Scotland?

If this doesn't get you ready for South Africa in 2021 then we don't know what will... pic.twitter.com/aODiFjiOqi

“He’s said to me that my next goal is the Lions and to aim for that. I came out of the meeting and I had never thought of that - and then thought ‘there’s no reason why not’.”

Graham, who has four Scotland caps and three tries to his name, is hoping to put a few kilos of weight on during their rigorous summer meets - and as well as making him bulkier he believes that can make him even faster.

“When I came into the Scotland camp, they asked me what my goals are for strength & conditioning and I said then I just want to get quicker because the quicker I am, the better I am,” he stated.

“I am 83kgs at the moment and want to get to 85kgs and if I get faster that would be great.

“Coming from Hawick, you always want to play for Hawick and then play for Scotland and get your photo up on the clubhouse wall.

“There’s a lot of big names on that wall so it is pretty special to be up there now and now I want to kick on further.”

Northern adventure has been beneficial

On his squad’s first week of training in the highlands of Scotland head coach Gregor Townsend said:  “It’s been really beneficial.

“We wanted to do something at the start of our World Cup camp that was a bit different. We had an idea of somewhere in the north and our management team were really impressed with the facilities.

“Canal Park is a fantastic set-up and is great template for other clubs to look at. Obviously, it cost money to build, but the feel around the place is there.

“It helped facilitate what we wanted to do rugby wise but also that factor of us coming together in a place not many have been.

“To see this beautiful part of Scotland has been excellent.”

U20 Rugby World Championship the latest victim of Coronavirus