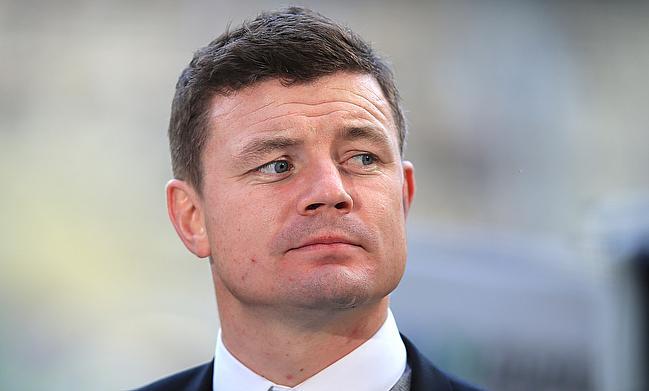 When Brian O’Driscoll appeared on my laptop screen, there was a brief moment of fear when I realised what was behind me...a picture of Brian.

My head snapped around; “Well, that’s rather embarrassing,” I laughed nervously. The former Ireland and British and Irish Lions centre then leant forward in his seat, asked if the other image was Alan Shearer, I confirmed, and proceeded to point out Martin Johnson over my other shoulder.

'Who’s the other one...?' was the next question. I thought asking the questions was my job? Talk about the shoe being on the other foot.

“That would be my girlfriend,” I responded, my cheeks no doubt blushing. “Jeez, we’re in good company!” came the response.

Well, embarrassing start over... things can only get better from here.

Over the weekend, it was the French clubs that dominated proceedings in the Heineken Champions Cup.

The nation had seven teams in the competition heading into the Round of 16, but there was disappointment for Lyon who lost to the hands of current champions Exeter Chiefs, whilst Toulon were unable to fulfil their fixture with Leinster due to an unnamed squad member testing positive for Covid-19.

As for the five remaining French sides, they were largely faultless. La Rochelle overcame a stern Gloucester challenge on Friday evening, whilst Clermont left it late to beat Wasps in the West Midlands. Elsewhere, Toulouse battled back to beat Munster in Limerick, Racing 92 put Edinburgh to the sword in Paris, and Bordeaux surprised many by beating Pat Lam’s Bristol Bears at the Stade Chaban-Delmas.

AJ played a blinder on Sunday! ??

A record 3?2? points haul for Sale in the @ChampionsCup and he was only 3? points away from the all-time record!

What a way to put on a show! ??#SCAvSAL pic.twitter.com/JB1zVXJCN5

But whilst it was the Top 14 clubs who made all the headlines, Alex Sanderson’s Sale Sharks made an impression on O'Driscoll.

“They (Sale) lost their first two games and still qualified,” O’Driscoll started, “and then gone away to Scarlets, which is a game I played in enough times, it is not an easy place to go and put 50 points on them.

“A really remarkable performance, so I thought that was probably the shock of the round, the magnitude of the victory.”

Having beaten Glenn Delaney’s Scarlets fairly soundly 57-14, Sale will now be making their way to southwest France to take on La Rochelle. Having been pooled with the French side last season, not much separated the two clubs during their encounters.

Neither side progressed further than the pool stages, so to now see each side in the knockouts tells you exactly how much these teams have developed in the past 12 months or so.

Let's start with Sale. Of course, their long-serving Director of Rugby Steve Diamond departed the side in December, allowing for former Shark Sanderson to be embedded in the position five weeks later.

Joining from Saracens, where he spent 12 years as a coach and one as a player, Sanderson won it all in North London. Working with Mark McCall at the StoneX Stadium, he lifted the Premiership on no less than five occasions, an LV= Cup and three Champions Cups.

Turn your attention to La Rochelle, and you see a former teammate of O’Driscoll's in charge. Ronan O'Gara took the reins at the Stade Marcel-Deflandre in 2019 after spending time with Racing 92 and the Crusaders following his retirement in 2013.

Making 128 appearances for Ireland and scoring 1,083 points along the way, it is his efforts in the red of Munster that perhaps stand proudest for many.

He represented his province 240 times, scoring 2,625 points and, arguably most importantly, he won two Champions Cups and three domestic titles. The 44-year-old is even the Champions Cup’s leading points scorer with 1,365 points to his name.

Both O'Gara and Sanderson have undeniable pedigree, but it is the Irishman that had tongue’s wagging over the weekend following his post-match interview with BT Sport following La Rochelle's victory over Gloucester.

He discusses mindset, style of play and coaching the likes of Levani Botia ?#HeinekenChampionsCup pic.twitter.com/5aI2t3euXL

Just looking into the coach’s eyes, you can see a drive and determination to carry on getting better. The hunger is still there for O’Gara and his reliable outside centre for 13 years says that is the epitome of the man he knew as a player.

“I think he has really developed as a coach,” O’Driscoll said. “I think lots of players when they go into coaching are frustrated because maybe the players can’t see things the way they were able to, particularly at this level.

“He was the first player of the tournament in 2010 and was consistently excellent. He has gone and got the coaching ticket the hard way, gone to Paris with Racing initially and then down to the Crusaders and now with La Rochelle.

“You marry that with some great, great players and all of a sudden, you have got a lovely package so it doesn’t surprise me. He has always been a good orator, has always been interesting, always been brutally honest, so it makes for good sound bites.”

After clinching another PRO14 title two weekends ago, Leinster are through to the quarter-finals as a result of Toulon's Covid-19 issues. It meant we didn’t get to see a clash between two sides with seven Champions Cup crowns between them, but this weekend, we will witness two clubs with a propensity for winning.

Coming face to face with Rob Baxter’s Exeter Chiefs at Sandy Park on Saturday night, this heavyweight battle will arguably be one of the games of the weekend.

Only having had their Ireland internationals back for just over two weeks, Leinster would have been hoping to reintroduce James Ryan, Caelan Doris and Garry Ringrose back to their matchday 23, but the trio were confirmed as being unavailable for selection on Monday.

“They are not really the sort of team that needs multiple games together, even after the Six Nations,” O’Driscoll said. “This Leinster team has an ability to pick up where they left off and even though they played a game against Munster straight after the Six Nations, they left a lot of their internationals on the bench and brought them on to finish the game.

'They're the champions of Europe and the Premiership. There's no bigger challenge.' ????

“It is a real squad mentality now. There is very little between the internationals and the other players. That people are able to come in and facilitate injuries and losses of form and do a great job irrespective of who they are and what they have achieved from a reputational point of view is impressive.

“It (the extra week) just gives them another bit of breathing space to heal the bodies. You have got to remember, when you come to April of any season, it is not about training anymore, it is about recovery.

“It is about getting yourself right mentally and physically and a lot of that is done in the analysis room, the team meeting room and in recovery sessions, rather than on the pitch.”

Despite having beaten Lyon 47-25 at the weekend, Exeter started slowly in Devon. Early on, the visitors scored tries through Baptiste Couilloud and Xavier Mignot before the current European champions fought back to lead 26-20 at the break.

Pressing on in the second half, Leinster’s opponents this weekend highlighted why they won two trophies last season and are in fine form heading into this knockout clash.

With this firmly in mind, O’Driscoll says the Exeter result on Saturday offered an insight into how the Dubliners can overcome the incumbent champions, but it also showed a clear representation of exactly why the Chiefs are the current holders of the Champions Cup trophy.

“The one stat that really stood out to me in the first 10 minutes, when it was 14-nil to Lyon, was that it was four offloads to zero,” O’Driscoll said. “I think that says it all about how you have got to break this Exeter defence down. You have got to take some risks.

“It is high risk, high reward and in all good organised defensive systems, more often than not, they frontload their initial line, but if you manage to make it in behind, making the next incision isn’t actually as difficult.

“That happens with offloads and with trying to create line breaks into scores and Lyon managed to do that. The thing about Exeter is that they are a team that don’t panic. 14-nil down and with a Heineken Cup in their back pocket, there are no worries, still with 65 minutes to go.

“They have loads of firepower and they just had to be patient, make no more errors, try to sort out the lineout and they managed to do that because they scored 47 points.

“They are a team that knows how to get themselves into a game when they are not firing. There is never any major concerns because they know they will have their moments in the game to cause the opposition major problems.”

BT Sport is the home of the Heineken Champions Cup with every single match live. Watch all the action from the Quarter Finals, including Exeter Chiefs v Leinster Rugby, on Saturday 10th and Sunday 11th April from 2:45pm on BT Sport 2.