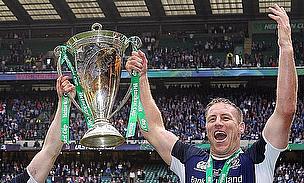 Brad Thorn holds the Heineken Cup aloft in 2012 - but could he be set for a return to action with the Highlanders?
©Press Association

Could the Highlanders' Super Rugby locking crisis lead to an SOS being sent to veteran former All Blacks and rugby league hardman Brad Thorn?

The Highlanders are struggling with injuries to Joe Wheeler, Alex Ainley, Tom Franklin and Mark Reddish, meaning that at the business end of the season, they are left rummaging around to find a suitable candidate.

Thorn seems to be the fix-it man, and given that he has previously played for the Highlanders and is a Mosgiel man, could we see him back in Highlanders' colours at the ripe old age of 40? Well, it seems unlikely, with him retiring from all rugby, only to play for the Barbarians, but it could be time to find someone from within the franchise area with more future potential.

Earlier this season the Chiefs went for the young and old players from their franchise area and even recalled Ross Filipo. Who could the Highlanders try?

While it would be amazing to gain the services of the experienced Brad Thorn to partner the only remaining lock Joe Latta in the middle row, it looks like regular loose forward Elliot Dixon might fill the void. It would be hard for anyone new entering the squad cold at the business end of the season.

Some Southland and Otago club players might be able to make the move, but it is difficult to know who?

Michael Fatialofa was probably the best option from Southland, but he no longer plays in Southland. Former Canterbury lock Joel Everson is now playing in Southland and could be an option, while I am unsure of any Otago options.

The other option is recalling a player from overseas like they did with Mike Delany, maybe someone like Isaac Ross or Ali Williams? Another option is Filipo Levi who is a veteran these days, but used to play for the Highlanders.

There might be some other locks around New Zealand, but it is hard to know which players haven't been picked up by other teams and it would be good to reward a local player.

Who will save the Highlanders locking crisis? I think Elliot Dixon is the man for the job, although he has played well in the loose forwards this year so it is hard to move him. They should also bring a good young player onto the bench to gain experience.