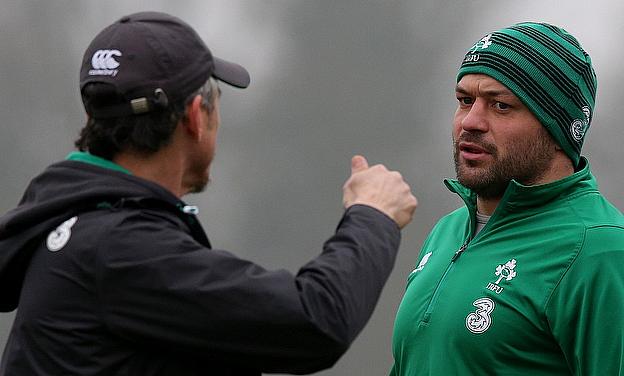 The Ulster hooker was removed as "a precaution" after a heavy bang to the head in Ireland's 26-3 victory in Italy last weekend, and missed training on Tuesday.

Best has completed all the return-to-play protocols, however, and will retain his place for Ireland's second-round clash with Les Bleus at the Aviva Stadium.

Ireland boss Joe Schmidt usually demands all his players train the Tuesday before a Test in order to merit selection, but the Kiwi head coach has made an exception for trusted lieutenant Best.

Ireland's most-capped hooker will make his 80th Test appearance at the weekend, with fellow British and Irish Lions Johnny Sexton, Sean O'Brien and Jamie Heaslip all returning from injury.

Sexton is back after completing his mandatory 12-week stand-down following four concussions in 12 months.

The Racing Metro fly-half replaces Ian Keatley at number 10, with France boss Philippe Saint-Andre's words ringing in his ears that Les Bleus will target him early on.

Leinster and Lions prop Cian Healy returns after hamstring trouble that has dogged him since September to take a seat on the bench.

Flanker O'Brien has his second chance to make his first Test appearance since November 2013 after a hamstring tweak forced him out in the warm-up in Italy last weekend.

The 27-year-old has made a quick recovery, however, and that following 14 months dealing with two consecutive shoulder reconstructions.

Number eight Heaslip returns to the starting line-up after shoulder and knee problems, while Isaac Boss retains his place on Ireland's bench despite Eoin Reddan's return to fitness.

Keatley drops out of the squad altogether despite starting at fly-half in Rome last weekend, with Ian Madigan covering all inside-back positions and full-back from the bench.

The medical assessment process around concussion has been central among the Six Nations news threads after the controversy surrounding George North's two knock-out episodes in Wales' 21-16 defeat to England last Friday night.

World Rugby has cleared the Welsh Rugby Union of wrongdoing but North has been stood down this week, with boss Warren Gatland admitting the Northampton wing was frustrated to miss out on the second-round clash against Scotland in Edinburgh.

Irish rugby bosses did not even hint that Best's removal against Italy was in any way driven by the furore surrounding North's situation the night before.

The implication was clear, however, that Ireland coaches and medics are not about to take any chances where concussion is concerned whatsoever.

While Best has been backed to make an immediate return then, Ireland will have been at pains to ensure he has comfortably progressed through all the appropriate testing before being cleared for action.

Best completed a full-contact session on Thursday and will be fully clear to play provided he suffers no concussions symptoms in the following 24 hours.

"He's ticked all the boxes of the protocols of the return to play.

"As long as he remains asymptomatic for 24 hours after today's session he will be fully cleared to play.

"Rory was totally asymptomatic from post-game through to now.

"We just kept both Sean Cronin and Richardt Strauss ready to go because that's the pertinent thing to do.

"With Rory passing all his markers and doing contact today we would predict and are confident he will be available to play."

France have made no secret of a desire to send juggernaut centre Mathieu Bastareaud down fit-again Sexton's channel right from the off at the Aviva Stadium.

Schmidt said Sexton and Ireland as a collective will not be fazed by any early bombardment.

"Their tactics will be whatever they will be and we will look to counter them - and the best place to do that will be Saturday," said Schmidt.

"Johnny's very fit, he's done a lot of training with us, he's spent the last 12 weeks training; he just hasn't done any contact.

"He's done plenty of contact this week and he's primed and ready to go.

"I think he's feeling very fresh. Sometimes the reverse can happen when you do a lot of contact and you feel very beaten up."