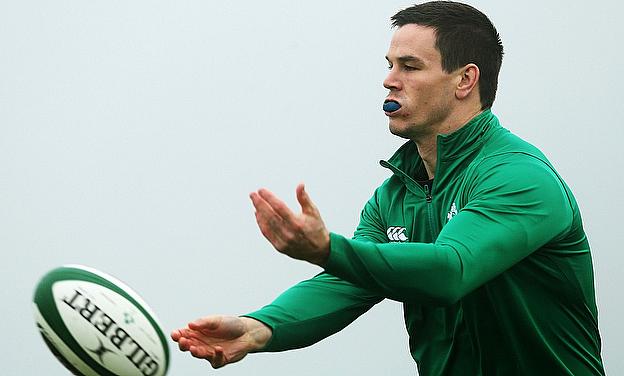 Johnny Sexton is "in a really good spot" and "itching to go" for Ireland's RBS 6 Nations clash against France, according to coach Richie Murphy.

Sexton completed his mandatory stand-down period after four concussions in 12 months as Ireland saw off Italy 26-3 in Rome on Saturday.

The Racing Metro playmaker is primed to replace Ian Keatley at 10 for Joe Schmidt's side, with Murphy admitting Sexton has looked sharp.

"Johnny's fine: he took a full part in training and did contact work today and is raring to go for the weekend," said Murphy.

"He's just itching to go. The last few weeks probably have been a little bit frustrating but he understood that he couldn't play until he got the all clear.

Sexton's French club Racing took the lead on the decision to stand their star man down for three months, but while Ireland were not integral in the call they have refused to fight it at any point.

Despite his enforced absence however, Murphy believes Sexton will be capable of finding form quickly against the French, especially on the goal-kicking front.

Sexton has been able to take part in non-contact training for the last fortnight - a factor which Murphy believes could accelerate his reintegration.

"His kicking is going fine: we did some work today and yesterday and he seems to be in a good spot.

"Obviously he hasn't taken any competitive kicks for a while so we will see how he gets on at the weekend.

"It's a pretty big test for him but the great benefit he has is that he has been training so he has had his eye in doing a lot of skill work and non-contact stuff that we have been doing.

"It's not as bad as somebody coming from injury where they haven't been able to touch the ball.

Aside from hooker Rory Best, Murphy confirmed Ireland had a clean bill of health in Tuesday's training session at their Carton House base.

Murphy said Best is "doing really well" as he follows return-to-play concussion protocols, with a decision on his fitness to be made later in the week.

Ireland boss Schmidt does prefer to select his match squad on a Tuesday ahead of Thursday confirmation - but could yet hang fire to allow Best further recovery time.

Jamie Heaslip is expected to return at number eight, while flanker Sean O'Brien has recovered from the hamstring problem that denied him a return at the last minute in Italy.

O'Brien had only just beaten 14 months of shoulder trouble when he suffered a hamstring twinge in the warm-up in Rome, but is now back to rude health.

When asked if Best would miss out on selection for not training on Tuesday, Murphy said: "Not at this stage, no.

"Everyone took part in training today so Sean O'Brien took a full part and Jamie was back, Eoin Reddan and Dave Kearney all in full training," said Murphy.

"The only one that didn't was Rory Best because he is on the return-to-play protocols.

"Rory's doing really well. The medical staff are really happy with where he's at."