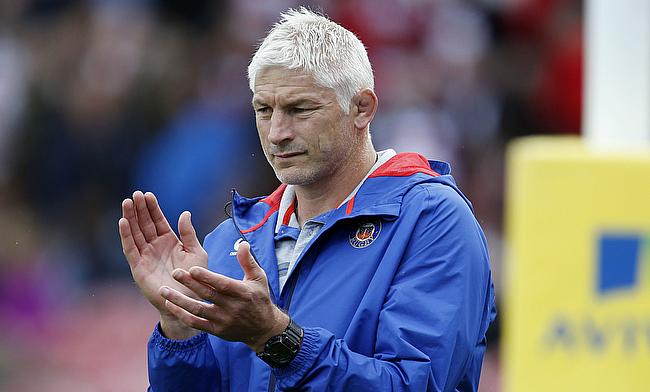 Todd Blackadder is relishing the prospect of taking on Bristol
©PA

Director of rugby at Bath, Todd Blackadder, revealed that his team is excited to lock horns with Bristol in Thursday's European Rugby Challenge Cup game at Recreation Ground.

The two English Premiership clubs met for the first time 128 years ago and have played each other 18 times in Premiership Rugby with Bath winning 10 of it while Bristol managed seven victories.

Since 2009, they have not played each other due to the relegation of Andy Robinson's men from Aviva Premiership. However, they are scheduled to play two games in English Premiership and two more in the European competition this season and Blackadder is relishing the challenge.

"It's going to be a cracking atmosphere at The Rec, and we can't wait to get out there."

Bath have made changes to their squad that defeated Pau 22-25 in the opening game with Zach Mercer, Jeff Williams and Michael van Vuuren earning a call-up. The former New Zealand lock will also be relieved to see Rhys Priestland retained at fly-half after he was excluded from the Wales squad for the November Tests.

"We've made a few changes to the starting line-up, bringing in the likes of Zach Mercer, Jeff Williams and Michael van Vuuren, who have been going well in training, but have kept largely the same squad who beat Pau last weekend," Blackadder added.

"We were pleased with the result out in France, but we know there are key areas that we need to improve, and while we've had a modified training week due to the short turnaround, we've been working hard on those things."

Meanwhile, Bristol rugby director Robinson has made as many as 11 changes to the squad that lost the opening game to Cardiff Blues by 33-20 at Ashton Gate.

Billy Searle is given his first start at number 10 while scrum-half Will Cliff, prop Anthony Perenise and number eight Jordan Crane also make a comeback as Bristol will be desperate for a win after losing all the eight games they have played this season spread across all the competitions.